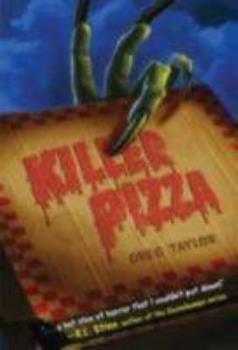 (Book #1 in the Killer Pizza Series)

Pizza you'll die for Toby McGill dreams of becoming a world-famous chef, but up until now, his only experience has been watching the Food Network. When Toby lands a summer job at Killer Pizza, where pies like The Monstrosity and The Frankensausage are on the menu, things seem perfect. His coworkers, Annabel and Strobe, are cool, and Toby loves being part of a team. But none of them are prepared for what's really going on at Killer Pizza: It's a front...

Published by Thriftbooks.com User , 12 years ago
Toby thought he was getting a summer job and that it might conveniently give him some needed experience for his future dream job as a chef in his own restaurant. Little did he know what applying at and scoring a job at Killer Pizza would mean. Two other teens, Annabel and Strobe, start training at Killer Pizza at the same time as Toby. A fourth teen, named Doug, seems like a reluctant future employee when he arrives to join their team. The training is intense as the four teens learn recipes, oven skills, and the general rules involved in working for the popular pizza joint. They seem like a pretty good team except for Doug. He just doesn't seem that into it. During the early weeks at Killer Pizza, Toby gets home pretty beat, and when some spectacular nightmares start interrupting his sleep, he's unnerved. The dreams seem so real, and the glimpses of a terrifying monster he experiences soon take on a meaning he never imagined possible. The innocent summer job turns out to be a cover operation for a group of monster hunters. Disinterested Doug turns out to be Harvey, the head of the whole operation. Toby, Annabel, and Strobe are being recruited as MCO's - Monster Combat Officers. Their employment at Killer Pizza has been a test to determine their suitability as candidates for the MCO Academy. As soon as their participation begins, they learn that monsters really do exist. In fact, their small town may be infested with hideous monsters known as guttata. Disguised as humans, these guttata are attacking and infecting innocent citizens with the hope of taking over the place. What follows is a fabulous monster hunt complete with crossbows, explosive devices, deadly talons and fangs, and intense battle scenes. The three MCO trainees are now involved in stakeouts, illegal breaking and entering, and car chases instead of kneading pizza dough and slicing pies. KILLER PIZZA is an action-packed horror romp sure to interest middle grade readers and teens, especially fans of authors like Darren Shan and R.L. Stine. Author Greg Taylor uses his previous screenwriting experience to create scenes that crackle with excitement and leap off the pages. This first novel offers great summer reading potential. Reviewed by: Sally Kruger, aka "Readingjunky"

Published by Thriftbooks.com User , 13 years ago
The title alone on Greg Taylor's new novel Killer Pizza was enough to raise my interest, then I almost passed on it. Now I'm glad that I got it. It's a book that's really geared for young adults, and must admit that it's as darkly engaging as any book by R.L Stine. Really got it for my son, who's in his early teens. The story revolves around 14 year old Toby, who finds himself working at his town's new Pizza parlor along with his co-workers Strobe and Annabel. But Toby soon discovers that the pizzeria is a front for a clandestine monster-hunting organization. Before long they find themselves some dangerous nocturnal monsters that are a combination between vampire, werewolf and gargoyle... and these creatures are intelligent, too. This is a fine good versus evil tale, and is fast paced, yet entertaining. Author Greg Taylor does a good job describing the scenes, and all in all, it's a good read, especially for the 12- or 13-year-old who doesn't suffer from nightmares. The vocabulary is right in line for the average junior high level reader, though some may consider the content to be a bit more violent and intense than they would expect. But for a mature early teen, it's a great read. My son and I both give this one a 5-star rating, and will be looking for Greg Taylor's next book. Highly recommended.

Published by Thriftbooks.com User , 13 years ago
The three of them wanted a summer job, all for different reasons, but for Toby Magill, Annabel and Strobe, it meant that they applied to make pizza at a new place called Killer Pizza. Toby was the only one that was really interested in making pizza, since he hoped to become a chef one day in the future. So making pizza during summer vacation seemed a great start for the future. Although 4 new employees started that first day, all of them began to work well together and form a team, except Doug, who always seemed to be doing something other than what he was supposed to do! After training, they were really getting into the groove, although Toby was faster and better at the actual pizza making. Steve Rogers had hired them and already Toby was wondering what was the secret ingredient that he used in his special pizza and whether he could duplicate it or maybe create his own sauce! Toby and Annabel were both 14, Strobe 15, so it wasn't surprising that both Toby and Strove soon had a crush on Annabel. Time passed quickly, so quickly that, when Steve called them into his office, they weren't sure why--especially when he left and told them that the owner would be in shortly to see them! They were quite surprised that the owner turned out to be Doug and he was so pleased with their teamwork that he wanted to offer them another job. Actually Doug's name was Harvey P. Major and the pizza empire he owned was just a front to fund his humanitarian work. He "eliminated monsters." Ok, you can think, "Ghost Busters" and get a fairly good idea of the rest of the book! I thought it was a fun read, and if the reader is old enough to know that monsters are great fantasy characters, then, I highly recommend it. I felt that the three main characters showed considerable "growth" of physical, emotional, and mental strengths because of their training to become "Monster Combat Officers" so it is more than pure entertainment! And you even get Toby's recipe for "Fiery Dragon-Breath Pizza!" How cool is that! G. A. Bixler

Killer Pizza is a killer read!

Published by Thriftbooks.com User , 13 years ago
When Toby McGill signed on for a summer job at Killer Pizza, he had no idea what he was getting into. He thought of his love of the Food Network, his love of cooking, and how he REALLY needed a summer job. He had no idea he was being recruited to hunt monsters, being trained to identify these creatures, and eventually to fight them as if his life depended on it. When Toby's cell phone rings with the good news that he has been invited to wear Killer Pizza's look, he is thrilled to have gotten a summer job after filling out applications everywhere in town over the past 2 weeks. Making pies with names like The Monstrosity, Fangtastic Hawaiian, and The Frankensausage, he is even happier to put his hands into pizza dough and think about his dreams of becoming a world-famous chef. Just when Toby has really clicked with his other 2 co-workers, a surprise announcement is made by the owner. Killer Pizza is actually a front for a monster-hunting operation. Yes...really! With a secret shelf that leads to a spiral staircase and an out-of-sight basement, Toby, Annabel, and Strobe are hesitant at first, but follow Harvey into the basement. What they find is a laboratory, a shooting range, and a training center to reach the status of MCOs (Monster Combat Officers). Taylor's imagination is brilliant with the description of how everyday people turn into monsters, the fight scenes that occur, and how Toby and his crew put these monsters out of power in the Hidden Hills community. On top of fighting monsters, Toby comes up with a new pizza recipe...named Dragon Breath. The recipe is included at the back of the book, and I can't wait to make it myself! Overall, Taylor's book is a masterpiece of thrills, chills, and pizza frills.

Published by Thriftbooks.com User , 13 years ago
Sort of an expanded R.L. Stine-type monster book about a pizza shop whose employees also hunt monsters... The lead character is a young boy who dreams of being a chef, starts work making pizzas and ends up hunting monsters. The book was tending teen, but very appropriate for my 10 year old; less tongue in cheek than I expected, but kept my kid quite interested on a long car drive. I read it, and it was funny in places and scary in others, a good quick pick for your young lad.
Trustpilot
Copyright © 2022 Thriftbooks.com Terms of Use | Privacy Policy | Do Not Sell My Personal Information | Accessibility Statement
ThriftBooks® and the ThriftBooks® logo are registered trademarks of Thrift Books Global, LLC