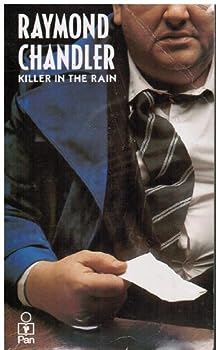 Killer in the Rain

This description may be from another edition of this product. From the master of American detective novels comes this riveting short story collection. In his early works, Chandler laid the groundwork for his signature character, the legendary Philip Marlowe. The...

Published by Thriftbooks.com User , 15 years ago
What the description fails to mention is that Raymond Chandler did not allow this particular group of stories to be republished after their initial appearances in pulp magazines of the thirties. The reason? These were the eight stories that Chandler cannibalized to form the substance and sub-plots of: The Black Sleep [taken from "The Curtain" and "Killer In The Rain"], Farewell My Lovely [using "The Man Who Liked Dogs", "Try The Girl" and "Mandarin's Jade"], and The Lady In The Lake [assembled with "Bay City Blues", "Lady In The Lake", and "No Crime In The Mountains"], the first, second and fourth, respectively, of his seven novels featuring the archetypal noir detective Philip Marlowe. (The High Window, The Little Sister and its follow-up The Long Goodbye were all wholly originated as novels, while Playback was rewritten from an unused treatment that did not originally have Marlowe as a character) Several years after Chandler's death in 1959, Ballantine Books, which in the '60s and '70s had the licensing rights to Chandler's work, went ahead and published these as a group in the book we have here, Killer In The Rain. Unfortunately, no publisher since has put these eight stories out again - neither Vintage, which publishes all seven novels as well as the contents of the three Ballantine collections of pre-novel short stories (The Simple Art Of Murder, Pick-Up On Noon Street, and Trouble Is My Business); even the two volume collected works published in handsome hardcover form by Library Of America, virtually complete in every other aspect, omits these stories, which leads one to wonder if the Chandler estate - such as it is - has reinstated Chandler's ban on the public having access to these stories - until such time as they truly become public domain. With the trend towards longer copyright life -designed soley to keep uncreative marketing/publishing people making an easy living off work which, after the creator's death, should belong to the freely accesible world culture domain, instead of putting more effort into marketing the works of the living creators who most deserve the remuneration whilst still alive - many of us may not actually still be here when they can be published by anyone without restriction. So grab a copy of these original masterpieces while there are dealers still with copies!~ MannyLunch

In case you're wondering...

Published by Thriftbooks.com User , 16 years ago
The Other Stories are The Curtain, Goldfish, and The Finger Man.

Published by Thriftbooks.com User , 19 years ago
Raymond Chandler learned his craft, initially, by writing short stories for the famous hardboiled magazine, "Black Mask." When it came time to move on, Chandler "cannibalized" many of those early stories to create his first four novels, combining plot elements and scenes while expanding and amplifying their passages. During his lifetime, he never allowed the republication of the stories."Killer In The Rain" presents them, along with an excellent foreword by Phillip Durham in which he discusses Chandler's ability to heighten a description, deepen a mood, to prolong the tension in a situation through these reworkings; or, as Durham puts it, "to see, to sense, and to say." If you want to read these tales for their "story value," though, you're best served by skipping this Foreword until after you've read them.The stories, true to the genre, are invariably violent, even brutal, particularly in their resolutions. ("The rule was," Chandler once wrote, "when in doubt, have someone come through the door with a gun in his hand.") Yet, even at this early stage in his career, as these stories illustrate, both Chandler's singular style and thematic sense were already largely in place.

Buy this if you've read all his novels

Published by Thriftbooks.com User , 20 years ago
I recommend this book to anyone who enjoys good literature. It contains short stories written for the pulp magazine Black Mask, and provides a fascinating insight into how Chandler created his novels, many of which are based on the short stories within this book. Even if you've never read Chandler before then these stories would provide a fine introduction to the incredible style of writing he created.

Published by Thriftbooks.com User , 22 years ago
This series of short stories is my favorite Chandler work. He doesn't overindulge in "shamus-speak", the plots are tight and Chandler does a fine job putting you in the detective's place, as in what the hell do I do now? These stories were pieced together to help create Chandler's later novels, thus were left out of other short story collections, but I think they are terrific. It's sure fun to imagine Robert Mitchum playing the detective, too.
Copyright © 2020 Thriftbooks.com Terms of Use | Privacy Policy | Do Not Sell My Personal Information | Accessibility Statement
ThriftBooks® and the ThriftBooks® logo are registered trademarks of Thrift Books Global, LLC