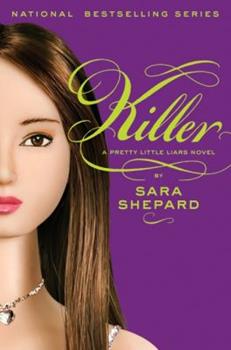 #1 New York Times bestselling series The sixth book in the #1 New York Times bestselling series that inspired the hit ABC Family TV show Pretty Little Liars. Hanna, Aria, Spencer, and Emily have been lying ever since they became friends with beautiful Alison DiLaurentis. And their bad-girl ways didn't die with her. Hanna's on a mission to corrupt Rosewood's youth, starting with a very attractive sophomore. Aria's snooping into her boyfriend's past...

Published by Thriftbooks.com User , 13 years ago
KILLER (#6 in the Pretty Little Liars series) SARA SHEPARD YA Mystery HarperTeen Rating: 5 Enchantments KILLER, the latest installment of the Pretty Little Liars series, takes its readers on a rollercoaster of a read as the girls find Ian's body, but the moment they bring Wilden back to the scene, Ian's body is gone. Now the girls are being called liars by both the police and the press and no one believes a word they're saying. Even as the new `A' texts the girls, no one wants to believe that the girls are in any danger from anything but fear of being out of the spotlight. But are they crazy or is the newest `A' actually trying to help them solve the mystery this time? With a jaw dropping ending that almost seems impossible, fans of the series will delight in the newest addition to the series. Pretty Little Liars is my favorite YA mystery series, hands down. KILLER is a fast paced, riveting read with characters that've grown over the course of the series and new secrets and scandals being revealed around every corner. As the girls discover and remember more about the night Ali died, the more things point towards Wilden as somehow being involved, but how and why? How can they possibly trust the man who seems to haunt all their memories? Aria's struggling not only with moving into her father's new house with his expecting girlfriend as a mean's to get away from her mother's boyfriend, but also with the fact she keeps bumping into Ali's older brother, Jason. Is it her or is there something going on between them? Surely the rumors about Jason hurting Ali all those years ago were just that. Rumors. Spencer yet again feels the major outcast. Not only because of her possibly being adopted, but because she's the one who first found Ian's supposed body. When her family's home is vandalized because of it and her parents ostracizing her for it, Spencer decides to find out where it is she might belong and answers the e-mail from her possible birth mother. Hanna's forced friendship with her soon-to-be-evil-stepsister isn't working out like her father would hope. And after Hanna blurted out what she did about Kate in the last book, it seems Kate's out for revenge. But Hanna knows how to play that game too. Emily's dealing with her own relationship troubles, especially when her boyfriend's mother seems to hate her. When her boyfriend won't believe her, what's a girl to do, especially after finding a photo in their kitchen with her head cut out. That's not typical friendly mother behavior. What I loved best about KILLER was how the tension never seemed to let up where the mystery was involved and how everything led up to the big party at the new hotel, a place that ends up harboring a very big secret. As all the clues start to fall together, the girls find themselves in deeper danger then they could ever imagine. One of the best scenes in the book is when aria is lured out to Jason's apartment, only to almost be attacked by a dog. When she has no other choi

Published by Thriftbooks.com User , 13 years ago
This is by far my favorite series and this book is probably the best after the original. The ending was unbelievable (no pun intended =p). I don't think i can wait for Heartless to come out!

Published by Thriftbooks.com User , 13 years ago
I love this series and this book. It never gets boring. This is a must read book and series.

Published by Thriftbooks.com User , 13 years ago
The most shocking one yet. I just finished it and I'm literally trembling. I loved every minute of it and I can't wait for more.

Published by Thriftbooks.com User , 13 years ago
This is by far the best book in the series. Sara Shepard knew excactly where to end the book, leaving everyone hanging, ready for whatever comes next. I finished this book in about 6 hours, and I can hardly wait for the next book!
Trustpilot
Copyright © 2022 Thriftbooks.com Terms of Use | Privacy Policy | Do Not Sell My Personal Information | Cookie Preferences | Accessibility Statement
ThriftBooks® and the ThriftBooks® logo are registered trademarks of Thrift Books Global, LLC