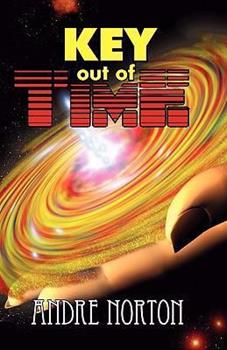 Key Out of Time

Key Out of Time is a book in the Time Trader Series. Ross Murdock and Arthur Ashe continue their grand adventure across Time and Space. Ross and Arthur are helped by Karara and two trained dolphins on the World of Hawaika, settled by Hawaiian and Polynesian settlers.

part of a series

Published by Thriftbooks.com User , 12 years ago
This book is part of a Time trader series which A. Norton started but was later co authored with Sherwood Smith. You will need to be up on science to catch all the details or read it for the sake of the adventure. Either way a good find.

Published by Thriftbooks.com User , 12 years ago
Interesting to read in the Editorial Reviews how Andre ALICE Norton employed HIS boundless imagination in her novels; makes me put a lot of credence in the review....

Published by Thriftbooks.com User , 13 years ago
Key Out of Time (1963) is the fourth SF novel in the Time Traders series, following The Defiant Agents. In the previous volume, Travis Fox and his fellow Apaches were stranded on Topaz. They fought a war of ambushes and raids against the Russians. They were assisted in their fight by the Mongols and three Baldie superweapons. In this novel, Ross Murdock and Gordon Ashe are helping the Polynesian colonists on Hawaika. The planet is not much like the data on the Baldie tape. There are no longer any continents or large islands, only small isles scattered throughout the worldwide ocean. Karara Trehern is a Hawaiian of the royal Alii bloodline. She is a leader among the colonists. Moreover, Tino-rau and Taua -- the dolphins -- obey her commands. Ross and Gordon are prepared to set up a time viewer to determine what happened to the planet. So far, their search for ruins to provide a guidepost to the past has been unsuccessful. The ship will be leaving in four more days, so they need to erect the machine soon. Karara suggests that they sweep the area with ten observers. The next day, they start the sweep by Ross, Ashe, Karara and seven more strong swimmers. Ross is the first to find something, but the dragon-like creature in the depression decides that Ross would be a nice lunch. In this story, Ross and Ashe set up the time viewer and peep first at ten thousand years in the past. They find signs of a medieval type civilization, but with anachronisms. Two hundred years later, those natives are gone and giant pylons dominate the scene. Three hundred years after then, even the pylons are gone. Ross and Ashe erect a time portal. When they are almost finished, a storm is spotted coming their way. They barely finish it before the storm strikes. Ashe turns it on to check its functioning and Ross, Ashe, Karara and the dolphins are swept through it into the far past. Ross finds himself in a heavy swell pushing toward the shore. Two ships are wrecked on the strand and locals are gathering the flotsam. Ross sees the wreckers kill one survivor from the ships. Ross hides in a cave above the shore. Soon, Karara and the dolphins find him. They tell him that the time portal is destroyed, so he knows that they have no way back to their own time. And they do not know anything about Gordon. This tale involves them with a native boy and the Foanna -- an elder species with strange powers -- in their search for Ashe. Ross soon finds himself among a seafaring culture much like the Vikings. Then he discovers that the Baldies are stirring up the natives. Elements within this tale strongly influenced the Witch World stories. Of course, the Foanna are much like the witches in Witch World, but the sea rovers, wreckers and other similar themes also occur in the series. This story takes Ross and the others into a war against the Baldies. The Terrans contribute some skills to the fight, but the Foanna do most of the damage to the Baldies and als

Published by Thriftbooks.com User , 19 years ago
Ashe Gordon and Ross Murdock, angry following the loss of their fellow agent and friend, Travis Fox on the planet Topaz, are on the planet Hawaikan, a warm planet that is mostly ocean, intent on setting up a time gate. The world is so different from what they expected after viewing the information from the alien ship that brought them to the planet, that they have decided to do a risky experiment and travel into the past of the planet. They are joined on this venture by two mutant dolphins and a female agent of Polynesian descent. However, just as they set up the time gate, a storm blows up and disaster strikes. Murdock is flung through the gate and into the planet's past. The time gate is destroyed. Murdock is left to try to cope with the different and aline world he finds himself in, where it seems there is currently a three way struggle going on even without the presence of the mysterious aliens who have dogged the Time Traders from the start.Without many references to the Russian/US race to colonize space, this book is not much dated at all. Murdock's resentment about the interjection of a woman into their crew is all too believable. However, Norton rarely takes the expected route and the story remains thoroughly entertaining.

Published by Thriftbooks.com User , 23 years ago
Key out of time is one in the series that I think started with Time Traders. This is the race between the U.S. and USSR to utilize technology left in the distant past on Earth by an interstellar race.The setting is on another planet and goes back into time on it and the travelers meet the race that originated the time technology. Throw in a coven of real witches, dolphins that can communicate with humans and you have one heck of a good story
Trustpilot
Copyright © 2022 Thriftbooks.com Terms of Use | Privacy Policy | Do Not Sell My Personal Information | Accessibility Statement
ThriftBooks® and the ThriftBooks® logo are registered trademarks of Thrift Books Global, LLC