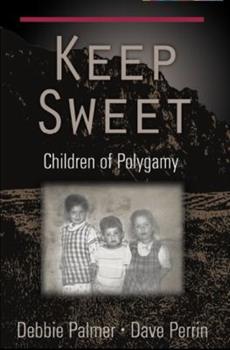 by David Perrin and Debbie Palmer

Keep Sweet: Children of Polygamy, co-authored by Debbie Palmer and best-selling author, Dave Perrin, journals Deb Palmer's experiences growing up as a child in a community where plural marriages and... This description may be from another edition of this product.

Published by Thriftbooks.com User , 14 years ago
This book was truly an eye opener. So many girls are being abused under this religion, it seems we are all allowing this right under our noses. I am just amazed at the amount of brainwashing going on with all this unfortunate people.

Child Bride in a Polygamous Community

Published by Thriftbooks.com User , 17 years ago
This is an eye-opening memoir of what it was like for a young girl, who later herself became a "celestial" (polygamous) bride of a much older man, to grow up in a Canadian community of the Fundamentalist Church of Jesus Christ of the Latter Day Saints (Mormons who practice polygamy contrary to the teachings of the mainstream Mormon church). The Canadian community is affiliated to the larger one in Colorado City, Arizona. It is clear that having multiple brides is a recipe for men to behave arrogantly and selfishly, and for women to struggle with inevitable jealousy and resentment. My one complaint about this book is that it needed a little trimming; it is a long memoir that does not even take the reader up to the point where the author, Debbie Palmer, finally leaves the community. I would have liked to have learned how this came about. But written in this way, you get a day-by-day account of what it is like to be a young girl in such a community.
Trustpilot
Copyright © 2022 Thriftbooks.com Terms of Use | Privacy Policy | Do Not Sell or Share My Personal Information | Accessibility Statement
ThriftBooks® and the ThriftBooks® logo are registered trademarks of Thrift Books Global, LLC