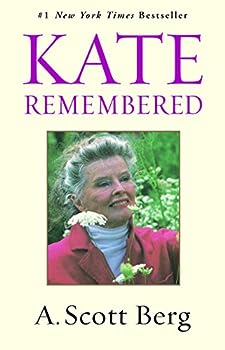 For seven decades Katharine Hepburn played a leading role in the popular culture of the twentieth century -- reigning as an admired actress, a beloved m ovie star, and a treasured icon of the modern... This description may be from another edition of this product.

Clearly written by a good friend

Published by Thriftbooks.com User , 18 years ago
One quickly gets the sense that this timely biography of the inimitable Hepburn was written by someone she knew and trusted, someone who would do a good and honest job of getting her life, thoughts, loves, friends, and history recorded in a way that did them kindly justice. Much has already, of course, been written by this icon, but Kate (the book) is full of fresh and intimate looks at her life with more emphasis on her thoughts and memories than other more straightforward biographies. It becomes something of a cross between the introspection of a memoir blended with the fact-based details of a biography. Katherine Hepburn's own voice comes through clearly in the many quotes with which author Berg seasons his book.Wonderful. Highest recommendation for those who can't get enough about this very special woman.

Published by Thriftbooks.com User , 18 years ago
Scott had the honor of being allowed into Katharine Hepburn's inner circle, and we are fortunate that he shared her life story with us. The bond they developed was genuine and the author did not exploit it, in my opinion. The writing is superb -- readers are able to visualize each scene as though it is happening before our eyes. The dialogue is engaging. When Kate provided Scott with his own set of keys to her home and involved him in the ritual of pressing the car horn at Fenwick, you can't help but applaud him for being accepted as a member of her family. The book flows very smoothly. The details regarding Hollywood and its actors provide great insight. The disclosures about Spencer Tracy, including his death were moving. The author's keen observations and personal comments add color to the biography. Whether you're a fan of Hepburn or not, "Kate Remembered" is an uplifting story about an amazing woman and the writer who considered himself her greatest fan.

Published by Thriftbooks.com User , 18 years ago
For anyone who is a movie buff, or a lover of Katharine Hepburn, you have to read this book. Not only does the author show the human side of this remarkable woman, he also gives us insights into other celebrities including Warren Beatty and Michael Jackson. You never think of Katharine as a comic, but this book will change your mind! She had a love of life and she cherished her friendships. This book definately changed my perception of this remarkable woman. Highly Recommended!!!!

Published by Thriftbooks.com User , 18 years ago
Anyone who wants to believe that Katharine Hepburn was as fascinating in life as she was on the screen - and put me on that list - will love this book. A. Scott Berg's memoir, Kate Remembered - and please note that the author informs at the onset that this is a memoir, not an official biography - captures a Hepburn who is always on, always ready with a pithy one-liner, always capable of a grand gesture, but who never seems fake or dishonest. It was impossible for me to read this without hearing her distinctive voice every time Berg quoted her.Although this does repeat some of the material in Miss Hepburn's own two forays into writing, and perhaps they have more of an authoritative voice since they came from her pen, it is worth reading for the gaps it fills and for Berg's tender treatment of his subject. To be honest, it is worth the entire cover price just to read about the surreal dinner party the evening that Michael Jackson came to dinner. Hepburn's one-liners interspersed with Jackson's silence and the other guests' continually failing attempts to make conversation is laugh-out-loud funny. When it became obvious that Jackson had never even seen a Hepburn movie (but said how much he loved them), I was laughing so hard, I dropped the book.Berg grabbed me on page one, and held my interest through the end. Read it. By the time you reach the end, you will probably want to go out and rent several of Hepburn's movies, if you don't have them already.

The Essence of a Life Captured

Published by Thriftbooks.com User , 18 years ago
Easily the best biography I've ever read. It truly captures the essence of the legendary woman in an intimate and honest light. Berg does an excellent job of capturing the details of what made Katharine Hepburn who she was and chronicles a life that defines a century. The book includes moments of genuine hilarity (such as Michael Jackson coming to dinner) and heartbreak (the death of her beloved Spencer and her own failing health). If you're looking for titillating details or long-buried-secrets this isn't the place to look (sure, there are some small surprises and her personality is more clearly defined, but there's nothing truly shocking) but if you want to get a better understanding and new respect for one of America's most influential and groundbreaking women, Berg's portrait of a lady will be a joy to read.
Trustpilot
Copyright © 2022 Thriftbooks.com Terms of Use | Privacy Policy | Do Not Sell My Personal Information | Accessibility Statement
ThriftBooks® and the ThriftBooks® logo are registered trademarks of Thrift Books Global, LLC