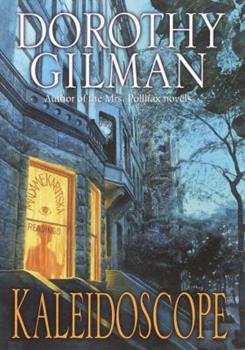 (Book #2 in the Madame Karitska Series)

Next to the incomparable Mrs. Pollifax, Dorothy Gilman's best-loved character is the mysterious Madame Karitska, who is blessed with a powerful gift of clairvoyance that attracts to her a stream of men and women craving help with their misfortunes, desperate to know what the future holds. . . . When a brilliant young violinist dies in a horrific accident, Madame Karitska has only to hold the victim's instrument in her hands to perceive the shocking...

A sequel to the Clairvoyant Countess

Published by Thriftbooks.com User , 15 years ago
This is a sequel to the Clairvoyant Countess and as much fun to read. Although it will stand on its own, I do recommend reading CC first, as this continues characters introduced in CC.

Published by Thriftbooks.com User , 18 years ago
I loved it! I am so glad that after all the years, a sequel was written to the Clairvoyant Countess. It is so nice to read a book with warm, loving characters overcoming evil in a terrible world. I just desperately hope that Dorothy Gilman will write a sequel NOW!!! (Pretty please Dorothy?)

Published by Thriftbooks.com User , 19 years ago
I don't need 1000 words. Dorothy Gilman- Emily Pollifax and Madame Karitska are really great fun and still warm and interesting at the same time. Can't wait for the video. I have all of them. Thanks and I do wish she would write more often.

So Pleased to See the Countess Again

Published by Thriftbooks.com User , 19 years ago
I actually bought this book new in a hardcover. Dorothy Gilman is one of my favorite authors. Aside from the fact that it just wasn't long enough, I enjoyed dipping into the life of Countess Karitska again. I loved the format of many little stories tucked into the main tale. I had written to Dorothy Gilman years ago asking for another countess story. She replied that she had been working on one. The wait (25 years) was almost worth it. My preference would have been 25 stories about the countess but it was a delightful story. I devoured it in one sitting. I've loaned it out already but will read it again when it is returned.

The Neighborly Psychic Leads the Way!

Published by Thriftbooks.com User , 19 years ago
Kaleidoscope is a most unusual novel in several senses. First, the style is quite unlike the author's most famous work, the stories about Mrs. Pollifax. Second, Kaleidoscope creates a series based a book first written 25 years ago -- The Clairvoyant Countess. Third, the book doesn't exactly fit any genre I can remember. Fourth, the main appeal of the book is the way that the heroine cares about her neighbors and seeks to help them, far beyond the call of duty or the requests of solving crimes (the traditional focus of crime and mystery books). Fifth, the book is filled with story threads, many of which are linked together in a way that almost defies description. Sixth, although there is nothing really humorous in the book, you will come away feeling remarkably light-hearted. Seventh, the heroine makes progress through psychic powers of the sort that police are reputed to use in many kidnapping cases, yet the stories use this to advance the plot rather than to rest solutions upon it. So come to this book with an open mind, and expect to be surprised. If you do, I think you will be pleased. I liked Madame Karistka very much as a character, and would be delighted if Ms. Gilman were to write a long series of books about her. She has a heart as big as her mind is sharp, which is an unusual combination in a novel these days. The basic story line is that Madame Karitska has psychic powers that primarily manifest themselves as psychometry ("devination of facts concerning an object or its owner through contact with or to the object") or clairvoyance ("to perceive matter beyond the range of normal perception"). She has fallen on hard times economically and lives in a poor neighborhood where crime is a problem. Through her friendship with Detective Lieutenant Pruden, she is called into cases and able to draw upon the police as allies to solve problems that she uncovers. She prefers to use her powers to add information about the past and the present, rather then the future. She wants people to make their own futures. Her occupation is giving "readings" for whatever the client is willing or able to pay. These readings introduce her to unusual mysteries and strange characters, which add spice and intrigue to the novel. Does your neighborhood have someone like Madame Karitska who tries to help people solve their problems? If not, what could you do to fill that role? Help build positive connections wherever you see the potential for them!
Copyright © 2020 Thriftbooks.com Terms of Use | Privacy Policy | Do Not Sell My Personal Information | Accessibility Statement
ThriftBooks® and the ThriftBooks® logo are registered trademarks of Thrift Books Global, LLC