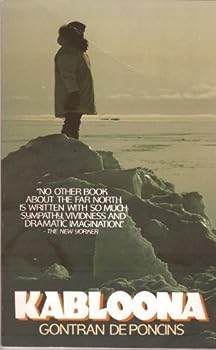 This extraordinary classic has been variously acclaimed as one of the great books of adventure, travel, anthropology, and spiritual awakening. In 1938-39, a French nobleman spent fifteen months living... This description may be from another edition of this product.

Published by Thriftbooks.com User , 17 years ago
This is a magical book which I first read when I was young. It inspired in me dreams of adventure which I did not follow, but which became a part of my inner life. Now that I am old, I am reading Kabloona again so that I can remember that I once was young.

Published by Thriftbooks.com User , 17 years ago
My good friend and I were talking a while back after I had watched the movie The Fast Runner, which he had recommended. Talk got around to my deciding to send him my old childhood copy (out of print, I believe) of Peter Freuchen's Book of the Eskimos, and his deciding to send me his old childhood copy of Kabloona. Neither of us had ever heard of the other's book. I must say, as much as I've always liked Freuchen, I got the better of the deal! What a wonderful book. So well written, such nice storytelling, so enjoyable, refreshingly honest, and unexpectedly insightful. It is haunting. It really is in a class by itself, although I have trouble putting my finger on exactly why this is so. All I know is that I did not want it to end, as I'm sure the author did not want his time in the North to end. And, like him, I don't think it will be the same if I go back and try it again. And I know I also had a strange feeling throughout which only later I identified as a form of envy, envy for the experiences this man had and for his ability to experience them so deeply. I've seldom felt envy mixed with awe and admiration like this before. Of all the book, I was most deeply moved by his account of the priest out in the middle of nowhere who had survived and kept warm in incredible cold merely through the power of faith and prayer. Humbling. A man comes out of nowhere, lives these experiences, writes this incredible book, and disappears back into nowhere. Amazing. Read it.

Some books stay with you for a lifetime

Published by Thriftbooks.com User , 21 years ago
It's been years since I read "Kabloona" by gontran de poncins. I don't remember the specifics of the book (I'm going to read it again, soon). What I do remember is the lingering humanity of the people. The hard life they lived. The culture shock between my life and theirs. I remember the mirror they held before me, forcing me to question our idea of "progress," "civility," and "modern man". Books such as "Kabloona" and "Black Elk Speaks" by John G. Neihardt and "Mutant Message" by Marlo Morgan tells us more about our roots as a species than many of the great thinkers and philosphers who speak in the abstract and grandeur of modern man. You read a book like this and you must pause and reflect, look deeper into yourself and the rushing stream you were born into. Step back and look at life from a different perspective. It can be life-altering or at the very least a stunning revelation.

A privileged glimpse of Eskimo life

Published by Thriftbooks.com User , 22 years ago
Gontran de Poncins's "Kabloona" is a classic of Arctic adventure, to be ranked alongside Farley Mowat's "People of the Deer," Harold Horwood's "White Eskimo" and parts of Peter Freuchen's "Vagrant Viking." A French aristocrat with a genuine yearning for adventure, de Poncins made his way to North America just prior to the last war. By stages, he managed to go right up into latter day Nunavut, some of the highest inhabited Arctic territory in Canada's north. Yet he didn't stop there. Putting himself into the hands of an Eskimo hunter who happened to be heading off onto the sea ice, he underwent an extraordinary odyssey lasting the winter through, in which he camped with the Eskimos in their winter igloos. de Poncins takes us into the very private, very communal world of these northern people. Private because, for Europeans, entering this strangely illuminated landscape was even then almost an impossibility. de Poncins admits that his initial impression was overshadowed by the nausea which sprang immediately into being as he tried to deal with the strange mixture of smells in the igloos. Most Europeans would not pass that first test and many an estimate of Eskimo culture has been biased by just such an affront to a sensitive olfactory centre. Yet once he had passed this initial barrier, a process which he says took some time, he found himself in a world unlike any other he had experienced or imagined. It is into this ageless community that he takes us for a very privileged glimpse of the last of the true ice-dwellers. Although a French national, de Poncins chose to remain in North America and he wrote his text about the Inuit in English, in collaboration with a friend. Not much is known about the author's life thereafter, as he did not publish much other work, but like G. B. Edwards's solitary yet wonderful book about life on Guernsey, "The Book of Ebenezer Le Page," this one book by de Poncins is a major accomplishment.
Trustpilot
Copyright © 2022 Thriftbooks.com Terms of Use | Privacy Policy | Do Not Sell My Personal Information | Accessibility Statement
ThriftBooks® and the ThriftBooks® logo are registered trademarks of Thrift Books Global, LLC