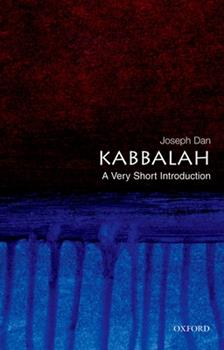 In Kabbalah: A Very Short Introduction , Joseph Dan, one of the world's leading authorities on Jewish mysticism, offers a concise and highly accurate look at the history and character of the various systems developed by the adherents of the Kabbalah. Dan sheds light on the many misconceptions about what Kabbalah is and isn't--including its connections to magic, astronomy, alchemy, and numerology--and he illuminates the relationship between Kaballah...

Published by Thriftbooks.com User , 13 years ago
Joseph Dan presents a phenomenal, scholarly, introduction to the Kabbalah as a philosophy and a phenomenon. This book doesn't go into the theology or the specifics of the various schools of Kabbalistic thought. Rather,the author provides an overview of the history of Kabbalah from the beginnings to modern day. If you are looking for a book that is written by a Harvard professor - this is it (and the author is one). If you are looking to do "pathworking", or study of the Tree of Life, or read the Zohar - look elsewhere.

Published by Thriftbooks.com User , 15 years ago
I agree with another reviewer who stated that this is the best introductory Kabbalah book I have ever read. My first book of Kabbalah I read 27 years ago: The Wisdom of the Kabbalah by Alexandre Safran, who was the Chief Rabbi of Romania before the 1947 and later become the Chief Rabbi in Geneva, Switzerland. That book was incomprehensible, but was one of the first ever published in modern times outside an University campus. By contrast, Joseph Dan is the quintessential academic. He has the skill of an extremely talented teacher. The book has precision to inform the un-initiated, the absolute beginners, what really Kabbalah is. He apeals to every day concepts people know, to get images. For example, in section Kabbalah and Spiritualization, he explains how Jewish believers - who had to fulfill 613 commandements - were told that G-d is absolutely perfect, infinite and incomprehensible to human mind. If He is infinite and incomprehensible, why fulfill the commandements? We are doing material things (even prayer is not complete if we don't move our lips) to satisfy a perfection with whom we had no communication Judaism was in the thirteen century practically removed from spirituality. What Kabbalists did, was to transform the rather dry commandments (mitzvot) in a "powerful concept of interdependence between man and G-d, in which the commandments were the instruments used by man in order to influence the processes of he divine world" As Joseph Dan elucidates, there is divine emanation called "shefa", which each time flows in abundance, the good power are stronger. I described merely two pages from the book, which is very dense. I need to re-read a few pages, but there was a daylight clarity in every word. There are no fluff. Every phrase and paragraph has clear meanings. One feels as following a theorem in mathematics, where if a line is missed, the proof eludes. This is not a mystical book - Dan proves the term "mystical" is purely Christian in origin and has no equivalent in the Jewish and Islamic religions. It is not a prayer or a meditation book. It is a scholarly manual, yet with all references and academic reasoning are hidden for the reader. The book has no promises, other than clarity. It invites precise questions. It makes comfortable anyone who graduated from high school or an University has rational and literary questions , rather then "mystical". Yet the meaning of "mysticism" is defined by Joseph Dan. It is a need for using rituals and metaphors for unique inward feelings and visions and we have no vocabulary to transmit the experience. The book does not cover the un-explained, the from-beyond, other than describe how it may happen in some followers of Kabbalah. The religious high some people expect to live in Kabbalah is not part of this book and will make Joseph Dan smile, if anyone expects it.

A short scholarly introduction to 'Kabbalah'

Published by Thriftbooks.com User , 16 years ago
Joseph Dan is one of the world's great academic experts on 'Kabbalah'. As he explains in the opening of the book , the word 'Kabbalah' has many meanings in everyday life. It can mean ' the reception' of a hotel, or a 'receipt' for a bill paid. But its meaning in religious terms is 'the reception of religious teaching' of the Torah in its entirety, including the Oral Torah, the Mishna, Gemara and also subsequent mystical texts such as 'The Zohar' and 'The Bahir.' Dan traces the changing meanings of 'Kabbalah' from the second century on down. He provides brief descriptions of its major teachers, from Shimon Bar Yohai to the Ari. He explains how the Lurianic Kabbalah which developed in Safed become a dynamic transformative element in Jewish history when it helped bring about that spiritual revolution in Jewish Life called 'Hasidism'. Dan also relates to contemporary misusings and cheapenings of the whole concept of Kabbalah in so - called 'New Age' teachings. He above all shows how the teachings of Kabbalah have been a major element in Jewish spiritual development down the centuries. This is an excellent summary, and a very good place to study and begin to learn what 'Kabbalah' is truly about.

Excellent; concise, yet covers a lot of ground.

Published by Thriftbooks.com User , 16 years ago
This is perhaps the best short introduction to the Kabbalah that I've seen. Unlike many popular introductions to the subject, this book does not pretend to make you a Kabbalist or teach you supposedly Kabbalistic techniques and practices. And, unlike many scholarly treatises, it gets right to the point and makes the subject accessible to the average reader. But don't get me wrong - Joseph Dan - a professor at the Hebrew University of Jerusalem - has impressive scholarly credentials, including his previous works "The Early Kabbalah" and "The Teachings of Hassidism." Dan describes the competing theories of the origins of the Kabbalah, and traces its development through the Middle Ages and on into modern times. There are chapters on the Christian Kabbalah, the Safed school and Lurianic Kabbalism, and on the controversial "false Messiah," Shabbatai Zevi. Dan also explores the impact of the Kabbalah on Hasidism and the Habad movement, and recounts the often hostile attitude towards the Kabbalah within the rabbinical schools. Finally, Dan explores the continuing impact of the Kabbalah in popular culture and the New Age movement. Illustrated with black-and-white woodcuts and illuminations, this book is an excellent introduction to a topic notorious for its obscurity.

A guide to the perplexed: Joseph Dan's new introduction to the Kabbalah

Published by Thriftbooks.com User , 16 years ago
This is by far the best and most accessible introduction to the Kabbalah and Jewish mysticism ever written. It has actually achieved what few have even dared: a concise history of Jewish esoteric thought over 800 years and beyond - all in 130 pages - an amazing feat! This book is must for any student of Jewish mysticism and religious thought, and a superb primer on the subject. (...) (...)
Trustpilot
Copyright © 2022 Thriftbooks.com Terms of Use | Privacy Policy | Do Not Sell My Personal Information | Accessibility Statement
ThriftBooks® and the ThriftBooks® logo are registered trademarks of Thrift Books Global, LLC