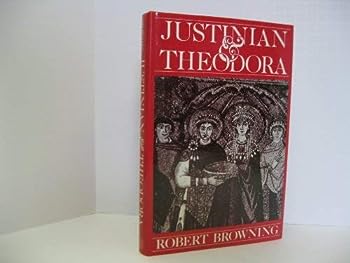 This description may be from another edition of this product. Browning's acclaimed biography of this extraordinary and enigmatic couple includes every aspect of imperial administration and policy. It is the story of a peasant's son who becomes emperor and...

Engaging Portrait of Justinian and his times

Published by Thriftbooks.com User , 17 years ago
This is a very good, readable account of the reign of Justinian and Theodora. The author does a commendable job of providing a concise overview of the political, religious, social and economic issues of this era of the Byzantine empire. Architecture and art are also addressed. The author is clearly knowledgeable about the subject matter and knows how to tell the story in an engaging manner. He is adept at bringing many of the key individuals to life and describing the political, diplomatic and military activities among the Byzantine empire, the Persian empire, and western Europe. A nice set of illustrations and maps are also included. Highly recommended.

Justinian and Theodora- a good source

Published by Thriftbooks.com User , 18 years ago
Justinian and Theodora is a good book with lots of information. I personally think it should have more about Justinian's early life. It's also just a tad bit confusing at times. Other than that, though, it's a great source for information on not only Justinian and Theodora, but also other well-known and not-so-well-known characters of ancient Rome such as Anastasius, Belisarius, and many others. You would do well to read this narrative if you need information on Justinian and/or Theodora, or are just interested in ancient Rome.
Copyright © 2020 Thriftbooks.com Terms of Use | Privacy Policy | Do Not Sell My Personal Information | Accessibility Statement
ThriftBooks® and the ThriftBooks® logo are registered trademarks of Thrift Books Global, LLC