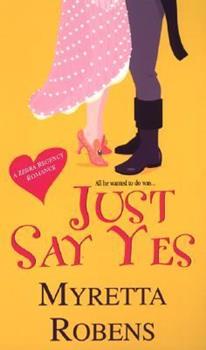 Posing as a steward in his quest to lead a simple life, the Earl of Cheriton finds his clever ruse challenged by a lovely vicar's daughter named Miss Cassie Hartwell who steals his heart, but whose social-climbing mama believes him to be unworthy of her daughter's affections.

Published by Thriftbooks.com User , 16 years ago
Cassie is a very believable heroine, and Geoffrey is everything a girl could want. "Just Say Yes" is definitely fluff, but it's also very entertaining. I thoroughly enjoyed it.

Published by Thriftbooks.com User , 16 years ago
At seven and twenty, Cassie Hartwell is firmly on the shelf. Nevertheless, her mama sees one last chance to marry her off. Her mama's bachelor-of-choice, Rodney Gilbert, was unpleasant when Cassie knew him as a child. She can't imagine he's changed. Cassie is content with her life as a country lass, making friends with all the neighborhood dogs. That is... until she meets Geoffrey Dorton, the new steward of a local lord. Mr. Dorton is handsome and charming, and his kisses are unlike anything she ever imagined. But Geoffrey has a secret. He's not Geoffrey Dorton, he's actually Geoffrey Dorrington, Earl of Cheriton. And Cassie, as much as he likes her, is just a vicar's daughter. She's no match for a future duke. I enjoyed "Just Say Yes" very much. It was charming & fun, and the dog scenes reminded me of something out of a Barbara Metzger book. It did get a bit slow at times (especially after a certain dog plot comes into play), but it's still a solid 4 stars. You've got to love a heroine with a name like Caspar Whittley Maria Hartwell!

a delightful and charming tale

Published by Thriftbooks.com User , 16 years ago
The plot for Myretta Robens' "Just Say Yes" may be a somewhat unoriginal one (an heir to a dukedom falls in love with the delightful but unassuming daughter of a vicar while pretending to be a humble steward), however the author's engaging and charming take on this much used plot made it a very enjoyable read. Tired of the London social scene, and deeply afraid that he'd end up leading a useless life of dissipation, the young Earl of Cheriton, Geoffrey Dorrington, jumps at the chance to do something worthwhile with his life when his brother-in-law, Lord Marchbourn, asks him to take a look at an estate he has just inherited and to put it in order. And so that he will be left alone to do his job, and not have to waste time making social calls which as the heir to a dukedom he would be forced to do, Geoffrey decides to pass himself off as the humble steward, Geoffrey Dorton. And his plan would have been perfection itself but for the complication of the vicar's charming and kindhearted daughter, Cassie. Where the pale, elegant and cool London ladies made no impression at all, short, tanned and practical Cassie delights at every turn. But the son and heir to a dukedom must not fancy himself in love with a humble vicar's daughter, for there would be no future in it. And yet, that's exactly what Geoffrey finds himself doing... The charm of "Just Say Yes" lies in the telling. As I have already noted, the plot is a much used one with little variation on theme, but the lively and invigorating manner with which the author tells her simple and affecting tale, and the totally engaging character portrayals of the hero and heroine made the book a very pleasant and fairly absorbing read (although it is true that some characters were very typical stock types: like Cassie's pushing social climbing mother, the cowardly lout that Cassie's mother keeps throwing at her, and Geoffrey's stiff and proud father). The romance that developed between Geoffrey and Cassie was rather well done too -- I think that the author captured the quick and deep manner with which both the hero and heroine fell in love with each other rather well. So that all in all, even though this was not a very "deep" and complex read, and even though the plot premise was an oft used one, "Just Say Yes" proved to be good and worthwhile read.
Trustpilot
Copyright © 2022 Thriftbooks.com Terms of Use | Privacy Policy | Do Not Sell My Personal Information | Accessibility Statement
ThriftBooks® and the ThriftBooks® logo are registered trademarks of Thrift Books Global, LLC