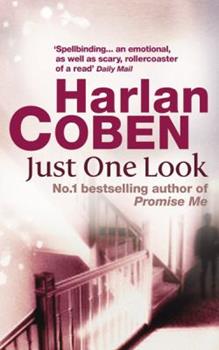 This description may be from another edition of this product. An ordinary snapshot causes a mother's world to unravel in #1 New York Times bestselling author Harlan Coben's shocking thriller. When Grace Lawson picks up a newly developed set of family...

Published by Kim , 5 months ago
Not many books completely throw me for a loop, but this book COMPLETELY got me. It’s exciting, intense, and keeps you guessing from chapter to chapter. The ending was so interesting and surprising. Harlan Coben has quickly become a favorite of mine.

looking for something with a twist?

Published by Thriftbooks.com User , 14 years ago
Then pick up a Harlan Coben book. I tell my friends when they get tired of the same old suspense novels, to try one of Coben's. They are nearly impossible to figure out and the end always throws two twists at you. One, you could probably guess and the other from left field. If you read thrillers to try to guess the author's ending, then don't pick this book up. You will just get frustrated and yell, "No one could have guess THAT!" hehehe A friend of mine actually did that. But, if you read for the thrill of the ever-changing plot, love when you can't put a book down, and thrive off cliff-hangers at the end of every chapter, then this is the book for you.

Published by Thriftbooks.com User , 16 years ago
This was the first Harlan Coben book I have read and after reading some of the reviews on this site, I have decided that if they thought this was not one of his best than I can hardly wait to read his other stuff. I thought this was one of the best books I have read in a while, and I am normally a very disciplined reader and can put down a book at any time and I found myself reading this at stop lights (I was almost done and driving to work)which is something I have never done before. I found this book to be compelling, interesting and different. When you always have at least three books going, (book on tape in car, one in my handbag, and one on my nightstand) to find a new author that writes this well is exciting.

Published by Thriftbooks.com User , 17 years ago
Grace Lawson has a good life, a devoted husband, two lovely children, a nice home and a successful career as an artist. One day she discovers a twenty-year old photograph in with a set of newly developed family photographs. In the old photo is a group of young people, one of which looks like her husband. Her husband, Jack, denies that it is he, but he shortly disappears. The police are no help so she delves into Jack's past herself and finds that she really did not know her husband at all. Grace also has a past. She is a survivor of a stampede at a rock concert known as The Boston Massacre. After being nearly crushed to death, Grace became the poster child for the news media. In Grace's search for her husband she discovers that her past and his past are intertwined. Harlan Coben tells an intriguing story that is as complex as a 1000-piece jigsaw puzzle, but never confusing. There are many twists and turns along the way with a nice surprise ending. It is an engrossing book and was very hard to put down.

Published by Thriftbooks.com User , 17 years ago
I was given 'Just one look', a superb Harland Coben thriller, by my English teacher to read over our October break - she said that we should be able to finish it by the week we go on work experience, which is a week on Monday. I finished the book tonight. I found myself literally up every night until around 1/2am reading 50-100 pages each night. The book was ace! Coben keeps us gripped at every stage, shivers literally run down your spine and you can't stop thinking about what will happen next. I just couldn't handle the late nights turning into sleepless nights filled with the thoughts of what would happen next. I'd thoroughly recommend this book to all and I'll certainly be taking a read at his other books, which I'm told are equally as good. Some may say that the last few pages of the book dragged on a little as the story came to a conclusion but, for me, it was perfect. It was a time when I literally found myself saying "ahh... that's why..." A great read - recommended to all.

She Saw too Much in Just One Look

Published by Thriftbooks.com User , 17 years ago
Grace Lawson goes to Photomat to pick up her pictures, family photos of her, her husband and two children, but among the pictures she finds a photo from another era, two men and three women are in it. One of the women has an X drawn through her face and one of them men looks like a younger version of her husband. When she goes home and shows the photo to hubby Jack, he denies it's him, then goes into his den, grabs his keys and is gone. It seems that there are some very bad guys in "Just One Look" who are after Jack and now they are after Grace as well and she's in trouble as the other people in the photo begin to die. With this excellent woman in trouble thriller, as always, Mr. Coben has written a book that had me glued to the pages. I couldn't put it down, but the book was much better than anything else I could have done on Saturday anyway.
Copyright © 2020 Thriftbooks.com Terms of Use | Privacy Policy | Do Not Sell My Personal Information | Accessibility Statement
ThriftBooks® and the ThriftBooks® logo are registered trademarks of Thrift Books Global, LLC