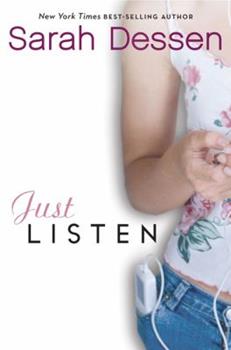 A New York Times bestseller To find the truth you've got to be willing to hear it. When she's modeling, Annabel is the picture of perfection. But her real life is far from perfect. Fortunately, she's got Owen. He's intense, music-obsessed, and dedicated to always telling the truth. And most of all, he's determined to make Annabel happy. . . "This is young adult fiction at its best." School Library Journal Also by Sarah Dessen: Along for the Ride Dreamland...

Published by Thriftbooks.com User , 4 years ago
I love Sarah Dessen books, she is my favorite author. This is in my opinion her best book. It is thrilling with the love story between Owen and Annabel. Throughout the book the reader is given hints about the night Sophie and Annabel ended their friendship. But you won't find out until the very end. Which keeps you on the edge of your seat the entire time (in a good way). For a month after reading this book I told almost everyone I know about it, and have bought it for numerous friends. The only bad part is when it was over, and I could no longer be in the world of Just Listen.

I Couldn't Put The Book Down

Published by Thriftbooks.com User , 16 years ago
Just Listen was an amazing book and on of my favorites. ( Only recommended for people 12 and up) The writer Sarah Dessen takes you on a wild ride into Annabel's life a normal teenager whose world gets turned upside down over the summer. When her sister starts an eating-disorder and Annabel has other things on her mind she turns to Owen Armstrong, a kid with a bad reputation. As Annabel gets to know him better she begins to see who he really is. He is a boy who always tells the truth and cannot lie no matter what. When Annabel is ready to speak the truth about what happened that summer, she turns to Owen and at the same time ends up finding out who she really is inside instead of who people want her to be. This book really relates to teenagers and how they feel when they come into a new school or do not have any friends. Just listen helps you realize what the world is about and how to overcome the bad things in it, by just speaking the truth and Just Listening to the people who do.

Published by Thriftbooks.com User , 16 years ago
I love Sarah Dessen's novels and this one does not fall short of my expecations. It is a beautifully written novel full of interesting characters with real problems. I found myself angry with Annabel, waiting for her to stand up for herself, but as a high school teacher I realize how hard it truly is for some students to do what Annabel needs to do. Sarah Dessen has connected with her readers again, and she has writen a beautiful novel that stands seperate from Speak, but will be loved by all that enjoyed Speak.

Published by Thriftbooks.com User , 16 years ago
Sarah Dessen's latest novel focuses on Annabel, the youngest in her family and the sweet, nice one who avoids confrontation and, ever since becoming best friends with the popular-yet-caustic Sophie, avoids standing up for herself. Her family's attention is centred around her older sister Whitney and her eating disorder, and Annabel's white lies - telling her mom she's fine, not discussing the night when she and Sophie stopped being friends - keep things going smoothly. It's not until she meets Owen Armstrong, another 'outcast' at school who quotes Anger Management phrases at her, that she becomes aware of how often she lies, and more importantly, how often she simply fails to tell the truth. This is a story about a lot of things, from complex family relationships to the world of modeling to the importance of music, but mostly it's the story of one girl finding her voice, and letting people hear the sometimes painful but always true things that she needs to say.

Published by Thriftbooks.com User , 16 years ago
How beautifully written this book is, I cannot even begin to explain, nor would I ever do it justice. It's hard to believe that Dessen's books keep getting better and better, because I always wonder how she's going to top the last one. Somehow, she always does, and in a way that leaves you desperate for more. I have never been one to re-read books, but I absolutely cannot lay this book to rest. I want to re-live the story, because I can't bear to let the characters go. Annabel is facing the hardest school year of her life. She's dealing with a lot of family issues including her sister's severe battle with anorexia, and trying to tell her mother that she desperatly wants to quit modeling. Her ex-best friend Sophie no longer talks to her, because she thinks that Annabel slept with her boyfriend, but the truth is far deeper and the worst part is that nobody knows. Now that her friends have turned on her she has nobody until Owen Armstrong, the most unlikely person, befriends her and makes her see life in a new light. Dessen did a beautiful job of portraying family relationships and how difficult it can be when you have to sacrifice for them. You feel so much a part of this book that it's as if you are sitting at the table with them arguing, crying, screaming, laughing, talking, or holding one another. The struggle with friendships is so real and honest that I'm sure every one of us can relate in some sense to the loss of a best friend, or a misunderstanding that never was resolved that Annabel deals with on a daily basis. The pain she has to endure while desperately hiding the truth from everyone else is incredible and you feel so deeply for her that it may bring you to tears or just want to reach into the book and give her a big hug. Every young woman should read Dessen's books, but especially this one. It has so many lessons to offer girls on topics that are extremely important for them to be aware of. Everything from love and loss to anorexia and rape, this book has it all and it is so very beautifully done. I cannot express enough just how highly I reccomend this book to women of all ages, but especially to high school girls. Dessen is absolutely brilliant.
Trustpilot
Copyright © 2022 Thriftbooks.com Terms of Use | Privacy Policy | Do Not Sell My Personal Information | Cookie Preferences | Accessibility Statement
ThriftBooks® and the ThriftBooks® logo are registered trademarks of Thrift Books Global, LLC