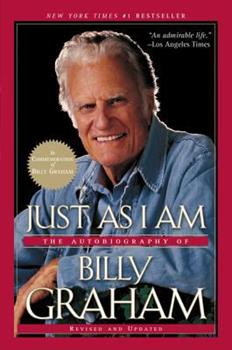 Just as I Am: The Autobiography of Billy Graham

Commemorative edition Hailed as "the world's preacher," Billy Graham enjoyed a career that spanned six decades and his ministry of faith touched the hearts and souls of millions. In Just As I Am, a #1 New York Times Bestseller, Graham reveals his life story in what the Chicago Tribune calls "a disarmingly honest autobiography." With down-to-earth warmth and candor, Graham tells the stories of the events and encounters that helped shape his life. He...

Warm. Full of hope! The greatest American Christian ever!

Published by Thriftbooks.com User , 21 years ago
I really enjoyed this book. Dr. William Franklin Graham, Jr. (Billy Graham hereafter) is one of the most influential American Christian evangelists of the 20th Century and ranks on the list of most influential Christians with the likes of the Apostle Paul (lived during the first century AD; executed in Rome in about 67 AD).Graham takes you through his life from his early childhood in North Carolina, to College, and then to his unprecedented ministry. The general tone of the book is similar to a conversation by a fireplace, talking long into the night and recalling with a smile the great events of the past. Graham's style is highly readable; one never gets lost in the text.The only time I have ever seen Mr. Graham in person was when he came to Toronto in 1995. He has traveled more than any person I have ever read or heard about; he has been to every one of the 50 American States several times, to Europe (Western and Eastern; Eastern Europe during the Cold War), to Africa, to the Middle East, India, Asia, Japan and Australia. He has also personally met with and often counseled every US President since President Truman (mid-1940's, right after World War II) to President Clinton (to 1997). There are chapters on numerous US Presidents and Graham's relationship with them (he always acted as a pastor and a personal friend; never as a political adviser or a partisan).Dr. Graham was also been a great pioneer in the ecumenical (different Christian denominations working together) and inter-faith (different religions working together) co-operation movements YET he never comprised the Gospel of Jesus Christ. Graham's unwavering service to Jesus Christ and his simply amazingly high degree of personal and organizational integrity really impressed me. Graham has been very influential in founding schools of evangelism, founding the magazine, "Christianity Today," and, of course, bringing thousands upon thousands to a saving relationship with Jesus Christ.Dr. Graham has also been a pioneer in healing the great racial divide that still permeates the United States. Indeed, during the 1950's and 1960's, Dr. Graham was one of the first white leaders to oppose segregation; he refused to preach to segregated audiences. Dr. Graham was also a friend of the late Dr. Martin Luther King Jr. and desperately wanted to attend King's funeral but unfortunately he was doing a series of Crusades (preaching the Gospel in organized city-wide efforts) in Australia at the time and so was unable to attend.Another interesting part was his tours of Asia. His wife, Ruth, was originally born in China to American missionary parents and only left in her late teens to go to America because of the Japanese invasion of World War II. The couple went back to visit Ruth's home and the medical compound that it was situated in during the early 1980's. Later, in 1992, Billy Graham was one of the first Westerners to travel to North Korea since the Korean War of the 1950's. Ruth had attended summer scho

Published by Thriftbooks.com User , 21 years ago
The most prolific evangelist in Christian history, a pastor to the Presidents, and a Christian man of integrity -- this is Billy Graham. Or, at least that is how most people see him. Here we have the story of his life, from his simple farm-boy beginnings, through his tent revival conversion, his college days and marriage to Ruth, his early fiery and outspoken preaching days, his years of global ministry and maturity, and ending today, as a respected man of God by virtually everyone in the world. The story is told with an easy-going pace and reading it you have to smile at Graham's style, which is honest, humorous, and very... normal. It's really amazing to see how God took this average fellow and used him in such amazing ways. This book is also a treasury for any other pastor, evangelist, or other person who wishes to live a life of integrity. Graham relates a wealth of wisdom gained from experience that the church would be wise to remember. We would all do well to remember Billy, and to honor his legacy by remembering his life and everything that he stood for. Just As I Am is an autobiographical masterpiece from a man I deeply respect.

God Knows How to Exalt The Humble

Published by Thriftbooks.com User , 22 years ago
I always wondered what it was about Billy Graham. I found out when I read this book. He is a humble man, a true servant of God, who took all things to the Lord, no matter what it was, before he made any decision. I recall from the book Pastor Graham flying over the middle east, wondering how he was going to speak to the people there about Jesus. And he thought, this is where Christ was born, where he lived and walked, and that is how he approached them. He found a way to connect Jesus Christ with everyone he ever spoke to. I learned much about humility and being a true servant of God from this book, and I recommend it highly.

Published by Thriftbooks.com User , 22 years ago
I found Just As I Am captivating from the moment I picked it up, and was unable to put it down. I read Just As I Am while I was convalescing at home for four days after an ankle injury at work. This was four of the most enlightening days I have ever experienced. Starting from the quaint surroundings of a North Carolina farmhouse, I was soon taken on a journey around the world, as Mr Graham described his many fascinating travels and crusades. Rev Graham not only describes his experiences for us, but by each chapter's end he capsulizes the lesson's he has learned during his trips and meetings with people of all walks and stations of life around the world. I was struck time and again by the depth of meaning Billy Graham finds in each of his life's experiences, his clarity of vision, and his ability to poignantly and keenly express what he has seen and learned. It becomes readily obvious why he has been taken into close company by many heads of state for the past 50 years of his ministry. This is a book not to be missed by any serious thinker.

Impacting the Kingdom of God

Published by Thriftbooks.com User , 23 years ago
I read this book in one week sitting by the pool in Flordia. I couldn't even put it down and get into the pool to cool off. This book will lift you up and encourage you to go at anything with Jesus. It is a good example how a person no one knows such as this farmer boy, Billy Graham, and with the strength of God can change millions and millions of lives for the cause of Christ. I thank God for leading me to the book shelf to read this wonderful book about faith in Christ.
Trustpilot
Copyright © 2022 Thriftbooks.com Terms of Use | Privacy Policy | Do Not Sell My Personal Information | Accessibility Statement
ThriftBooks® and the ThriftBooks® logo are registered trademarks of Thrift Books Global, LLC