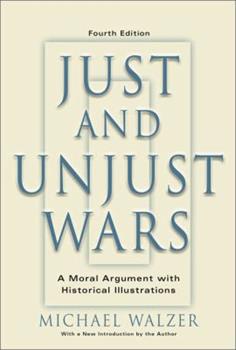 Just and Unjust Wars: A Moral Argument with Historical Illustrations

From the Athenian attack on Melos to the My Lai Massacre, from the wars in the Balkans through the first war in Iraq, Michael Walzer examines the moral issues surrounding military theory, war crimes, and the spoils of war. He studies a variety of conflicts over the course of history, as well as the testimony of those who have been most directly involved--participants, decision makers, and victims. In his introduction to this new edition, Walzer specifically...

Published by Thriftbooks.com User , 18 years ago
After reading the Oct 2004 review of Seth J. Frantzman, I feel the need to answer his question of why Walzer does not deal with the question of Sept 11. The simple answer is that the book was first published in 1977. It is true that it is now in its third edition, but even the newest edition is 2000 and it is simply a reprint of the old edition with a new preface added. Granted, the reviewer is correct that Walzer focuses on Western conflicts (though again, the Iran-Iraq conflict also hadn't started yet when Walzer was writing) but I would have to say "Go with what you know." Walzer does a good job of setting the context for the situations that he does discuss. In fact, the reviewer's comment that "THe question of 'just wars' was obviously aimed at the recent Iraq war" just makes Walzer's case for him. The fact that his text is still clearly relevant today makes his historical points that much more powerful. In our philosophy department there has been a major resurgence in teaching Walzer in the last 3 years for just this reason. Even though Walzer's opinions on the current US-Iraqi war can be fairly clearly determined from "Just and Unjust Wars", if you want a more explicit version of what he would say, you should pick up "Arguing About War" which is Walzer's 2004 book of recent essays. He discusses the Iraq war explicitly, although books published in May are already a bit dated. Walzer's philosophical arguments are timeless though and need to be thought about and discussed. I would highly recommend the book and recommend that the reader keep current conflicts in mind while reading the historical episodes of other conflicts to help put Walzer's arguments in perspective.

Published by Thriftbooks.com User , 19 years ago
Michael Walzer's book is an in-depth look at the morality of war. It is not an easy read especially for the laymen. It helps if the reader has a good grounding in philosophy and understands the idea of "moral relativism". His book makes an in depth study of many facets of what takes place in warfare. The chapter that I found most interesting because it is in the news so much was on pre-emptive warfare. Walzer does believe that countries have the right to go to war pre-emotively but he does set the bar quite high. He believes a country must really be under eminent attack before it acts pre-emotively. He did believe that Israel acted justly in its pre-emptive attack against the Arabs in the 1967 war. He also defines terrorism as a criminal act and not a justifiable act of war. He makes a clear distinction between terrorism and guerilla warfare, deeming guerilla warfare a moral method of warfare.I recommend this book for military, political professionals and for philosophers.

Published by Thriftbooks.com User , 20 years ago
This book was required reading in philosophy class when I was a sophomore at West Point. I recently pulled the book out of storage to review it. Was our invasion of Afghanistan a "Just War"? Would an invasion of Iraq be a "Just War"? It covers more about war than just these topics (and not specifically these actions), and it reveals that just and unjust war/fighting is not always so easy to define.

Published by Thriftbooks.com User , 20 years ago
Professor Michael Walzer examines just war theory in a clear, methodical and rigorous fashion. Concrete examples clarify and flesh out the theory. It covers not just conventional warfare, but also several offshoots that have become much more relevant since the 1950: peacetime reprisals, guerrilla warfare, and terrorism. In addition, he dissects the notions of "war crimes" and official/bureaucrat/citizen responsibility for war. These analyses are especially useful as today's violent conflicts become more fragmented and in some ways "messier". Walzer's viewpoint is definitely from a left-of-center perspective (not *far* left), but I think people of any political persuasion would find reading it to be extremely insightful. He doesn't shy away from controversy yet his arguments are always well-reasoned. Highly recommended to both the layman and political scientist/philosopher, especially as we enter the uncertainty of the post-9/11 world.

A classic in its field

Published by Thriftbooks.com User , 23 years ago
This is an erudite work examining the philosophical subtelties and ethical issues that war evokes. Any one seriously interested in war, applied ethics, political philosophy, and international relations should be familiar with the arguments Walzer uses. The historical examples are standard dilemmas and problems which are useful in class discussions in philosophy as well as history. The only critique I have of the book (which I often use for my own philosophical writing) is that Walzer's ethical examination of war ends with nuclear war--in this I think he is wrong, we should not stop our analysis even with the nightmare scenario of a holocaust, for that is to give the moral hand over to those who would use nuclear arms. The book is challenging and insightful and deserves further reprints.
Trustpilot
Copyright © 2022 Thriftbooks.com Terms of Use | Privacy Policy | Do Not Sell or Share My Personal Information | Accessibility Statement
ThriftBooks® and the ThriftBooks® logo are registered trademarks of Thrift Books Global, LLC