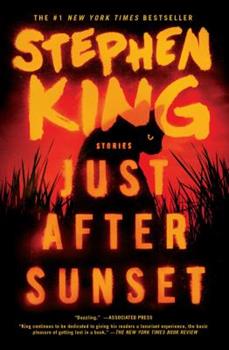 With stories that have appeared in The New Yorker , Playboy , and McSweeney's, this classic collection displays the phenomenally broad readership of #1 New York Times bestselling author Stephen King. Just After Sunset-- call it dusk, call it twilight, it's a time when human intercourse takes on an unnatural cast, when nothing is quite as it appears, when the imagination begins to reach for the shadows as they dissipate to darkness and living daylight...

Published by Reads for fun , 8 months ago
Enjoyed it all. I'm a fan!

Published by Leah , 2 years ago
Some of the stories are great. Others not so much.

Published by Thriftbooks.com User , 12 years ago
Although I have never been an advocate of the view that Stephen King was losing his touch, this collection seems to offer a version of King with so much energy and creativity that some of his more recent works pale in comparison. It is an intense and generous sampler of short fiction that truly shows King at his best, whether you consider his best to be his horror or his more mainstream work. "Willa," which provides a quiet, understated opener to the collection, is suspenseful, eerie, and creative. It also, in my opinion, offers a rather unique solution to what I will admit is one of King's problems: crafting realistic modern dialogue for his younger characters. (A problems that he seems to have largely eliminated in this collection, by the way, with the exception of his creative use of it here.) "Harvey's Dream" is also quiet. I found it far more unsettling than "Willa," however, as its depiction of ordinary marital unhappiness--already frightening, given its monotony and barely suppressed hatred--slowly evolves into a sharp, ice-pick intrusion of unfortunate foresight. "Graduation Afternoon" features a similar kind of transition from ordinary unhappiness to the outright horrific. "The Gingerbread Girl" is one of the best stories in the collection. King shows a deft touch with Emily's characterization while still writing at a white-hot pace and bringing this particular reader to the edge of her seat. He takes enough time to build up Em's past and her attempts to outrun it before starting the clock with the arrival of the zealously psychotic Pickering, one of the best and most frightening villains in all of King's short fiction. Another standout is "N.," a Lovecraftian story of OCD and the outside dimensions, which, given its portrayal of the eroding veil of sanity between us and a massive, incomprehensible evil, will probably have you organizing your things into circles (just to be on the safe side). There's also the very short "New York Times at Special Bargain Rates," which artfully blends disaster, afterlife, and premonition (three of the collection's major themes) in just a few pages to produce a quiet ghost story that doubles as a tearjerker. "Mute" is marred by the distracting eccentricity of the wife's crime (pulled from real life) and "Ayana," though a rare unsentimental exploration of miracles, is lackluster, as is "Rest Stop." "Stationary Bike" will probably be a divisive story. In my opinion, it's best going into this not thinking of it as a horror story, and simply enjoying the ride (no pun intended) as Sifkitz's exercise efforts begin to extend into the unnatural. And the ending, whatever its faults in terms of resolution of suspense, is a valuable lesson in terms of dieting. "The Things They Left Behind," with which it share a similar tone, explores the aftermath of 9/11 without the slightest hint of exploitation. It's also an interesting story about survivor's guilt and how grief latches onto possessions. Lastly

Published by Thriftbooks.com User , 12 years ago
This collection of stories, written over a number of years (I remember reading "The Cat from Hell" when I was 18 or 19, in the Year's Best Horror Stories) shows that King has never lost his touch, and that short stories are still his finest format. "Harvey's Dream" is breathtakingly terrifying for anyone who has children, "The Gingerbread Girl" is better than 99% of the movies made with similar themes these days, and reading "N." was like plunging into an icy lake in Canada in the middle of February. I still can't get warm. Whole-heartedly recommended.

Published by Thriftbooks.com User , 12 years ago
I bought this book to read over the Thanksgiving holiday. My fingers kept walking themselves to the end table where it lay and fluttering the pages until I could start reading without "actually" fully opening the book. I finally gave in to my "King addiction" and could no longer delay the anticipated pleasure and read it in two sittings. Good ol' King. Dependable ol' King. He's there to entertain and does his job well. A couple of the stories I'd already read in other venues but found they held up to a second performance. Do yourself a favor, schedule some alone time and read this entertaining collection of King yarns. bg

Published by Thriftbooks.com User , 12 years ago
Stephen King again proves that he can mesmerize readers with his graphic imagination and story-spinning skills. JUST AFTER SUNSET, which plumbs an astonishing range of genres, gives fans everything they've come to anticipate from him. As the author explains in his introduction, he has been away from the short story game for a while. His last collection, EVERYTHING'S EVENTUAL, was published more than six years ago. In fact, King tells us, he feared he had lost his knack entirely. But serving as an editor for one of the annual BEST AMERICAN SHORT STORIES reinspired him. King starts us out gently with "Willa." David is surprised to discover that his fiancée, Willa, left the Amtrak station where they and a group of fellow travelers are stranded. When he decides to ignore the others' advice and go look for her, he finds her where he would most expect to find her --- or at least that's the way it seems at first. The plot twists in a manner that both shocks and (on second thought) feels entirely logical. In "The Gingerbread Girl," Emily begins running compulsively in an attempt to deal with an unbearable tragedy. She runs from her husband, landing in her father's "conch shack," a summer cottage on a Florida Key. She continues to run, run, run, just as fast as she can. And while she does, she marvels that the area has been taken over by the wealthy who have built McMansions everywhere. The huge homes are mostly deserted in the summer since their owners use them to get away during winter. But when she can't resist taking a peek behind the gate of one monstrosity, she is stopped in her tracks. A husband recounts a nightmare in "Harvey's Dream" that begins slowly --- but watch out for that inevitable kicker. In "Rest Stop," a mild-mannered professor answering a late-night call of nature interrupts a nasty scene of abuse in a roadside restroom. Who can he call for help? Expect to experience vertigo while reading the brilliant "Stationary Bike." Richard Sifkitz explores a world within a world that makes him wonder which Russian nesting doll he's really living in. In the somehow ultimately comforting "The Things They Left Behind," how can a survivor cope when the possessions of co-workers killed on 9/11 persistently appear in his home? Definitely less reassuring is "Graduation Afternoon," in which Janice's worries about status and her wealthy boyfriend get a whopping dose of perspective. In "N.", therapist Johnny Bonsaint's sister wonders why and how he died, especially after she reads his disturbing notes on one of his patients. "The Cat from Hell" is a classic horrorfest, featuring one particularly unforgettable scene. King displays his romantic side as well as his fascination with what comes after death in the quiet "The New York Times at Special Bargain Rates." A priest has never heard a confession like the one he listens to in "Mute," while one explanation for miracles weaves through "Ayana." Try though they might, readers will never forget the pli

Vintage Stephen King at his best. Master of the short tale.

Published by Thriftbooks.com User , 12 years ago
First, I'm an avid Stephen King fan. I'm pretty sure I've read all of his books but I don't think I can say I've read every word he's written....but I have to be close. After reading Just After Sunset, I'm convinced that King's true talent lies in the short story/novella sphere. He is a master at developing stories and characters quickly and like a spider can spin his web with perfection. His novels, all of them, are worth reading. You won't be sorry having invested the time with any of them, but his true masterpieces are in his collections of short stories and novellas. Just after Sunset is comprised of 13 stories, many published previously. For example, The Cat From Hell was originally published in 1977. King displayed, even then, his willingness to experiment with publishing. Originally, only the first 500 words of Cat From Hell were published in Cavalier. Readers were invited to finish the story and the completed work was published later the same year. The story has been published, revised, and then published again. The story was also used in Tales From the Darkside. Others, such as Willa are recent creations and are a treat for the mind. "N" continues King's willingness to experiment in getting his stories out to the public in innovative ways. The short story "N" was the basis for the animated series of the same name. Harvey's Dream, originally published in New Yorker in 2003, is a story of fathers, daughters, and dreams and is a read that will keep you interested throughout. Of all the stories included in Just After Sunset, my favorite is Stationary Bike. Richard Sifkitz has a belated physical and learns that his cholesterol is extremely high; dangerously so. Like so many of his generation he decides to get a stationary bike to exercise and hopefully ride off his health problems. Unlike many of his contempories, however, Richard rides his workout machine. He rides and he rides and he rides. He decides to paint a mural in the room he rides in to give him something to look at while he's working out. As in all of King's work, the simple mural turns out to be unique and Richard's bike takes him on trips he really doesn't want to make. This is a riveting story and is worth the cost of the book by itself. Other stories of note (my opinion only) are "The Things They Left Behind", "Graduation Afternoon", and "The New York Times at Special Bargain Rates". I especially appreciated the last section, Sunset Notes, comprising King's own thoughts about each of the stories in the collection. I always like the special note he includes to readers at the end of many of his books. Thank you once again Stephen King. "And the beat goes on!" Peace to all.
Copyright © 2020 Thriftbooks.com Terms of Use | Privacy Policy | Do Not Sell My Personal Information | Accessibility Statement
ThriftBooks® and the ThriftBooks® logo are registered trademarks of Thrift Books Global, LLC