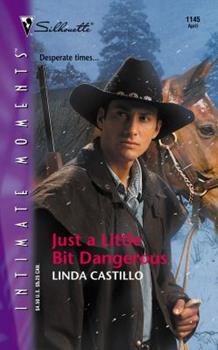 Just A Little Bit Dangerous by Linda Castillo released on Mar 25, 2002 is available now for purchase.

Published by Thriftbooks.com User , 16 years ago
At first I wasen't going to read this because I didn't know if Intimate Moment books were any good. I gave it a chance and really liked it! Give it a try and you'll agree.....

#2 IN WHAT IS TURNING OUT TO BE A GREAT TRIO!

Published by Thriftbooks.com User , 17 years ago
I hate to say it but I am reading them backwards. Doggone!Beginning with A HERO TO HOLD,John Maitland's story, this is "High Country Heroes" - men with the Rocky Mountain Search and Rescue, who are working at straightning out their lives -- falling in love.JUST A LITTLE BIT DANGEROUS is Deputy Sheriff Jake Madigan's story - a man who have been used and taken advantage of by a scheming woman. He has lost his faith in and the ability to love. He wasn't going to vulnerable to any woman again, they can't be trusted.Abby Nichols has lost all faith and trust in the justice system and her former lover. [serves her for going to bed with him.]She was well on her way [except she got lost] to keeping one jump ahead of Jake until the blizzard set in.You have to give her credit for her bungling attempts at escape - it even made me cold.I am still curious - along with Jake - as to how that sniper found them and kept on their trail. Never been to the Colorado mountains.Those violet eyes of Abby's sure gut-punched Jake, although to put his job in jepordy with a female prisoner didn't seem realistic. But then the male has a [hopefully] strong hormonal drive to mate and Abby sure wasn't turning him down. Oh, those pheromones!The only thing that gave credance to their tale was the rib shot that Jake took. He wasn't about to pull any punches when the D.O.C. manhandled Abby. Buzz Malone had to stop Jake from ruining his career. Great rescues but I would like to have heard Buzz give a tongue-lashing to the County Sheriff's department people. Look for Buzz's story in A CRY IN THE NIGHT #3 --- Great story except for the PMS's -- read on - hard to put down.HIGHLY RECOMMENDED --M --- set is a keeper.

Published by Thriftbooks.com User , 18 years ago
Just a Little bit Dangerous first caught my interest because of its setting in the Colorado Rockies mainly because I grew up there. After I got past the setting then my attention turned to the plot. Here is a big tough lawman chasing a condemned killer through very dangerous snow. This is interesting enough, but when the killer turns out to be a blonde bomb shell, the temperature really heats up especially when the big tough lawman starts to playing around where he shouldn't be. Luckily the author does something the jury didn't, she finds the heroine not guilty, and then the fun begins. Dollars to doughnuts that you can't put it down. I couldn't until the last word!

Published by Thriftbooks.com User , 19 years ago
A pretty well-spun yarn. Interesting and unique premise, with some suspense and danger mixed in. A definite page-turner. The writing was solid, and it kept me interested from the first page to the last.I did find some of the dialogue at the ending (uttered by the villian) to be just *so* B-movie, though. I mean, come on. We're heard this all before in old re-runs of mystery and film noir flicks! I cringed a little at that. But still, that was a relatively minor issue.My main concern was that this steadfast law officer could "cross over the line" into wholly inappropriate and unprofessional behavior with his female prisoner. Sure, he beat himself up over it, and sure, he kept on reminding himself that he shouldn't do it, BUT HE STILL DID IT. It was dumb, dumb, dumb, and in the Real World, it could have had serious consequences. In the Real World, only an imprudent and unprofessional man would have behaved in such a way.Sure, since this is a romance novel, a fantasy, it makes for a juicier tale if he behaves in a certain way. But it was extremely dumb, and I lost a certain amount of respect for his character because he behaved in this way. But, with that said, it was definitely a unique tale, and pretty decent read.

Published by Thriftbooks.com User , 19 years ago
It's just another routine job, Deputy Sheriff Jake Madigan tells himself. Track the escaping convict down, bring her back, and get on with his life. So what if she's a beauty who looks like anything but a killer--he's been fooled by women before and he isn't going to let that happen again. Abby Nichols has escaped from prison after barely surviving an attack--she's going to stay out and clear her name if it kills her, and nobody, especially not some hunky cop, is going to stop her. Except Jake is something like a force of nature and doesn't give up. But in the Colorado mountains, there are other forces of nature--forces that keep Abby and Jake together for longer than either of them intended, or wanted. Jake starts to believe Abby's story about an organ-stealing doctor and a frame. But will either of them be alive for long enough for that to make a difference? Even if they do, can both really be expected to love again? Author Linda Castillo combines heart-pounding suspense with powerful romance to deliver an exciting novel. Jake is a wonderfully damaged hero while Abby is his perfect match. A sniper in the woods makes the 'snowed into the cabin' plot device work and a truly nasty villain manages to be convincing and dangerous at the same time. A highly enjoyable romantic adventure.
Copyright © 2020 Thriftbooks.com Terms of Use | Privacy Policy | Do Not Sell My Personal Information | Accessibility Statement
ThriftBooks® and the ThriftBooks® logo are registered trademarks of Thrift Books Global, LLC