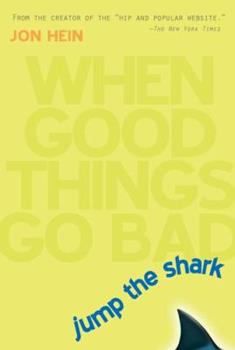 Published by Thriftbooks.com User , 19 years ago
From the first page this book is a non-stop crack-up. I've given over 20 copies to friends...and they love it just as much as I do. This Hein guy knows more about TV then just about anyone. And his stories about celeberities, athletic figures, and politicans jumping the shark are not just funny but really insightful. You deserve a few laughs and this book delivers. Hein has invented a new way of seeing popular culture. He must be an amazing man and I wish I were related to him. I'd give it six stars if I could!!!!!

Sharks have never been this much fun!

Published by Thriftbooks.com User , 20 years ago
Jumptheshark.com is one of those rare concepts that's so obviously brilliant that you wind up mad at yourself for not thinking of it first. Especially for those of us who grew up with '70s and '80s TV (and who rolled our eyes at the original shark-jumping episode of "Happy Days"), the whole idea makes perfect sense.Now creator Jon Hein has capitalized on his well-deserved success to bring "jumping the shark" to book form. With a quick, cheeky writing style, Hein delivers zingers that pinpoint the exact moments when our favorite TV shows, celebrities and music artists jumped... or at least went from great to not-quite-as-great. With each analysis lasting less than two pages, it's the perfect bathroom reader, though I personally couldn't put it down no matter what room I was in.You likely won't agree with each and every verdict... and that's part of the fun. The whole point of jumptheshark.com is to foster debate, and the book preserves that same spirit.TV and celebrities were made for shark-jumping, but Hein pushes it a little when he ventures into other realms. "We spotted a fin," as the book would say, in the chapter on sports. And the section on politics is shark-bait for sure. The book avoids jumping altogether, though a sequel would do well to stick closer to showbiz. There's plenty there to keep the shark well fed for a long time to come...

Published by Thriftbooks.com User , 20 years ago
As a lad, I remember that now fateful Saturday morning when I turned on the TV to catch the new season of Scooby-Doo. Sadly, and painfully I remember being introduced to this odd and mouthy character that was 75% and 100% annoying: Scrappy Doo.Something clicked in my young mind. I realized that something had happened to my favorite cartoon. Something unusual. Something that had forever changed the dynamics of Scooby Doo. I didn't realize hit at the time, but Scooby Doo had officially "Jumped the Shark.""Jumptheshark.com" is one of my Top Five websites. Being part of the TV generation, this book is part "stroll down memory lane," and part shooting gallery. It has all of those old shows that you remember, but it has the point when the show tanked.Anyone who is part of the TV generation will love this book. It is a companion volume to the famous website. Though it is not as extensive at the website, it has a better analysis and illustration on the TV shows. I like the sidebar trivia questions.But this book is not limited to Farnsworth's brainchild. IT includes jabs at sports, rock bands, and our favorite Politicians. Democrats jumped the shark with the Mondale-Ferraro ticket, and the Republicans jumped with Watergate (obviously.) By the way, Nixon jumped with the Checkers speech.This broad ground, of course, leaves the door open for more volumes, which I eagerly expect.This book takes a humorous look at pop culture, and laughs at the events and people that make us laugh. Enjoy

It is better than the web site!

Published by Thriftbooks.com User , 20 years ago
I am the type of person who like to say they found somthing first. Jumptheshark.com was one of those things. I told all my friends about it, we had heated arguments, and even created a drinking game over it.I heard the book was going to come out and my hand slapped my forehead. Why would the creator destroy the simple elegance of a simple web site?Well, after I bought and read the book, I figured it out. This compilation is even better than the site because it incorporates other genre's. I never give anything five stars, this, is a first! Enjoy.

Even better than the site!

Published by Thriftbooks.com User , 20 years ago
I LOVE THIS BOOK! When you pick it up, you read an entry and instantly you're debating Hein on why and when something jumped the shark. It works not just for TV, but Music, Sports, Politics and Celebs too. I know a ton of people who will love this. Congratulations John, Jump The Shark hasn't jumped yet!!!
Trustpilot
Copyright © 2022 Thriftbooks.com Terms of Use | Privacy Policy | Do Not Sell or Share My Personal Information | Accessibility Statement
ThriftBooks® and the ThriftBooks® logo are registered trademarks of Thrift Books Global, LLC