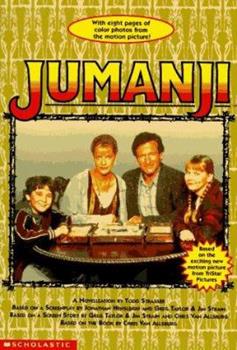 This description may be from another edition of this product. When Judy and Peter find a board game in the park, they take it home, hoping to alleviate their boredom. One live lion, an erupting volcano, and a dozen destructive monkeys later, the children are no...

Published by Thriftbooks.com User , 16 years ago
Jumanji is a great book! I am 23 years old now and I still remember the day my 2nd grade teacher read Jumanji to my class. I was hanging on her every word and the illustrations were absolutley amazing. This was in the year 1987 and up to that point I had never seen pictures so vividly and immaculately rendered. Jumanji was unlike any other book that I had read because it was fun, exciting, adventurous, and also eerie which added to the intrigue. I was very disappointed by the movie interpretation of it, because it's nothing like the real thing.

Published by Thriftbooks.com User , 17 years ago
Chris Van Allsburg used to be my favorite picture book artist, and in many ways he remains so to this day. And it's books like, "Jumanji" that remind me why I love his work as strongly as I do. For some reason, Van Allsburg's picture books are so popular and so evocative that they are continually adapted into full screen motion pictures. "Polar Express" has just been turned into a computer animated extravaganza, and "Jumanji" was a Robin Williams vehicle once. Just the same, nothing compares to the original tale. Using his uber-realistic illustrations to highlight how incredibly bizarre the storyline is, this book is fully worthy of the 1982 Caldecott Medal it was awarded. Peter and Judy have been left home alone by their opera going parents and boy are they boredy bored bored. After playing with their toys and making a mess they decide to take a run to the park. Once there, they discover an abandoned board game called Jumanji sitting beneath a tree. On a note taped to the bottom of the box read the words, "Free game, fun for some but not for all. P.S. Read instructions carefully". The kids don't know what to expect but they take the game with them anyway. After reading the instructions they find that once a person begins Jumanji they cannot stop until someone has won the game. The first roll of the die leads to a space that reads, "Lion attacks, move back two spaces". Suddenly there's a real live lion in the room, and it's regarding Peter hungrily. The kids realize, to their horror, that whatever happens on the board happens in real life. If they want to finish the game (and remain alive) they're going to have to continue. The book really plays on the old idea of "when the parents are out the kids will get up to all kinds of unwitting mischief". There's a lot in this story that's similar to "The Cat in the Hat". Two bored kids. The magical entity that destroys their home but (undeniably) occupies their time. Getting everything cleaned up before mom and dad walk in the door. You get the idea. The story is surreal and skirts the edges of the disturbing. With illustrations created with Conte dust and Conte pencils, Van Allsburg makes the pictures especially realistic. You can make out every strand on Peter's head or observe delicate details on the rubber bands holding together Judy's braids. As a child, I was always fascinated with realistic images of fantastical situations. Van Allsburg fits this bill perfectly. "Jumanji" was later given a sequel of sorts entitled, "Zathura". I haven't read it myself, but I think my loyalties will always lie with the original. There's something about Van Allsburg's clean lines and startled expressions that really chill the reader to the bone. If you have a child that likes to be ever so slightly freaked out from time to time, I can't think of any picture book artist that does a better job of this than the master of the pencil drawing: Chris Van Allsburg. And "Jumanji" is his masterpiece.

Published by Thriftbooks.com User , 20 years ago
When two children are left home alone for the afternoon, they find a mysterious board game named "Jumanji: A Jungle Adventure" in the forest. As they begin to play, Peter lands on a spot marked "Lion attacks, move back two spaces." Judy has a look of horror on her face, when a real lion appears in the living room! Peter quickly manages to get the lion locked up in the bedroom. Judy then lands on "monkeys steal food" and finds live monkeys tearing apart the family's kitchen. The children go on to face other dangerous obstacles, including a rhinoceros stampede, during the course of the game. Read to find out if their adventure ever ends before the children's parents arrive home to a disaster!Van Allsburg won a Caldecott Medal for this wonderful story. The illustrations are done in grays with shading. The pictures of people, animals, and the setting are very realistic. Most of the pictures are at eye level, so the reader feels like he or she is in the house along with the characters. The story itself is so colorful and adventurous that the black and white pictures complement the mystical aspects of this fantastic story!

Published by Thriftbooks.com User , 22 years ago
I first read this book in second grade, and ever since then, I've loved it. (I'm a freshman in college now). I remember loving the drawings. I love all of Chris van Allsburg's books, but this was the first one that I ever read. The movie is okay, but hardly does this book justice.

Boy, I would love to play this game.

Published by Thriftbooks.com User , 22 years ago
This children's book is about two children who find a board game based on a jungle setting that actually comes "alive" when they begin playing it. The book was expanded and made into a film in 1995 starring Robin Williams (and a paperback novel with this same title was based on the screenplay of that film). This book won the 1982 Caldecott medal for best illustrations in a book for children. The reviewer of April, 1999, from the University of Delaware mentioned that some parents might be concerned of the "hint of evil will." Personally, I don't see any of that at all. When kids (and even adults) play board games, they can get really involved. This book is an expansion of that concept.
Copyright © 2020 Thriftbooks.com Terms of Use | Privacy Policy | Do Not Sell My Personal Information | Accessibility Statement
ThriftBooks® and the ThriftBooks® logo are registered trademarks of Thrift Books Global, LLC