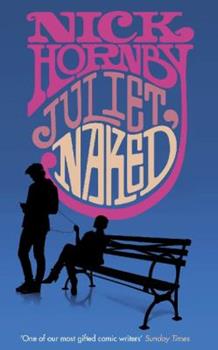 This description may be from another edition of this product. From the beloved New York Times - bestselling author, a quintessential Nick Hornby tale of music, superfandom, and the truths and lies we tell ourselves about life and love. Now a major motion picture...

Published by Thriftbooks.com User , 12 years ago
I remember plowing through Long Way Down in one evening while on a trip to San Diego. I actually had the audio version on my iPod, which included a single male narrator doing all the voices, even the women, of a book written in the first person. But that didn't stop me from loving that book and having a great memory of sitting out watching the ocean while listening to the incredible story with characters I truly missed when the book ended. It's been a few years since, and I never got around to reading Slam. But I downloaded Juliet Naked on my Kindle for a quick trip to New York. I can't say I finished it in one day, but pretty damn close. It took a little longer for the characters to grab me. In my laymen opinion, the fact that we move into the story so subtlety may be a sign of even better writing. The story just unfolds at nice pace. I think what amazes me most if how much Hornby makes me care about his characters, and this is very much the case n Juliet, Naked. Even the annoying Duncan is exonerated with his "you asked us to listen" line, which is one my favorites. I am going to say that Long Way Down is still my favorite Hornby book, but Juliet, Naked is #2. I'm anxious to download Slam and see what I missed there, and of course I look forward to Hornby's next masterpiece.

Published by Thriftbooks.com User , 12 years ago
Well, I tore through that in about 3 days and as always with Hornby I really enjoyed it. He is unique and completely unpredictable. It seems with most modern culture when an element is introduced you have an idea where they are going with it, with Hornby you never know. He is on the list of Authors whose books I would purchase on pre-release every time.

Understanding the human heart, and cult rock stars, too

Published by Thriftbooks.com User , 12 years ago
Nick Hornby has a bit of a reputation as a writer whose appeal is largely to young, pop culturally-obsessed men. While it's true that his earlier novels do focus on not-yet-fully-formed young men and their often unsolicited journeys towards adulthood, I always thought he was a writer remarkably sensitive and sympathetic to all his characters, male or female. Hornby's newest novel, Juliet, Naked, is a wonderful, sweet book. The story focuses on three characters approaching or exiting middle aged, and how they deal with the regret of unfulfilled lives. Duncan is a teacher who only comes to life when talking, listening to or writing about reclusive singer-songwriter Tucker Crowe. Annie is in a dead-end long-term relationship with Duncan and in a dead-end job as a seaside museum curator. And then there's Tucker Crowe, who has not recorded in over two decades and has been a disinterested observer of his own withdrawal from both his creative life. I'll leave for you to discover how a small, uncharacteristically assertive action of Annie's - a dissenting post on Duncan's all-things-Tucker-Crowe website - sets into motion a series of events that forces all of these characters out of their respective ruts. What's wonderful about Hornby's writing is that he understands and is compassionate towards all of his characters. You can think that Duncan is a sad, small man whose obsessive expertise regarding Crowe's small catalogue is a poor excuse for an actual life, but Hornby lets you understand how he got that way, and respects Duncan's intelligence and passion, however misapplied. (I understand Duncan - his core belief that you can judge the value of people by the value of their cultural taste - and while I'd like to think (please, please) that I've never taken his road, I understand all too well how someone might make the mistakes he's made.) I also love the way Hornby presents what seems to be a very British worldview - pessimism combined with unfailing politeness. His characters manage to give pointed, incisive criticism to each other, yet retain a social propriety that you may find charming or frustrating, depending I suspect on whether you are or are not British. Either way, though, the characters are human and alive and just like people you know. Finally, although Juliet, Naked is not a music book, Hornby writes about music with the expertise of someone who, like Duncan, has given a lot of thought about art, and artists. Here, he writes with command about the mindset of the cult fan, the "more-obscure-the-better" value model the cult fan embraces, and where, exactly, the cult artist himself fits in this ecosystem (hint: artists generate great work but may not be the best judges of their worth). Hornby is a rare writer who crafts literary novels for mass audiences. He is proof of an argument he has made about many great recording artists in his music writing - that you can create art of great, lasting value while remaining a crowd-pleaser. In tha

For the Woman in Your Life Dating "That Guy"

Published by Thriftbooks.com User , 12 years ago
I love this book. I love this book. I love this book. There, have I said it enough? This isn't a spoiler review. If you want a plot synopis, by all means, move on. The story opens in a dreary British seaside town, in the current day. Our main characters are a late thirty-something couple. He's a college professor and aficionado of a reclusive ex-eighties musician who reminds one of, well, Jandek, before Jandek actually started doing concerts. She is a museum curator, who is longing for a better life, and a child, somewhere a lot less boring. The book is full of lines like, "Where in the North of England could one find an unattached arts graduate? We went to North Bumblebee; supposedly there had been one there four or five years ago." Much of this is howlingly, bitterly funny. If I tell you what happens, it will ruin the plot, so I'll tell you what it's not: this isn't a continuation of, "High Fidelity"; it's not a story about stoically finding happiness in what you have; it's slightly anti-British--America looks like the place to be; its main thesis seems to be that leaving adolescence, and more importantly, having children, is the secret to long-term happiness. This is a lot about looking back, and ending what doesn't work. For many Gen-X'ers in their late thirties, this may hit a little too close too home. So, if you were rooting for the commitment-phobic, rock musician obsessed guy in this story, um, well, not the book for you. If however, you are hopeful, family friendly (gack, did I just say that?), rooting for the woman looking for the baby, and possibly the aging very ex-rock star, then this is just grand. P.S. Some of the jokes may rely on familiarity with Northern England stereotypes. (If you've seen, "Hot Fuzz", and "Kids in the Hall", you should be fine.)

Published by Thriftbooks.com User , 12 years ago
All you really need to know about Juliet, Naked, Nick Hornby's latest, is that it doesn't disappoint. It's really, really good, and it may even replace High Fidelity as my favorite. The main characters are Annie and Duncan, a middle-aged couple, and Tucker Crowe, an aging musician in retirement. Annie and Duncan have a relationship-ending fight about the quality of Tucker Crowe's new album, and Annie begins a correspondence with Tucker Crowe himself. Juliet, Naked is about Regret. Big, mid-life crisis level Regret -- grief and anger at the too-quick passage of time, of wasted opportunities. It's about the realization that one has not Done Enough, or Done the Right Things. This may sound unappetizing. But one of the rare and great features of Nick Hornby's writing is how he takes situations that would normally be dreary, such as a serious break-up (High Fidelity) or teenage pregnancy (Slam), makes these situations hilariously funny. His characters are self-aware about themselves in some ways, but not at all in other ways. These gaps in self-knowledge, and Hornby's gentle handling of them, are exquisite in their subtlety and insight. This book reminded me: (1) Do the work you love, and (2) Strive to spend time with the people who (a) love you and (b) who you love in return. Which of us doesn't need this reminder, always?
Copyright © 2020 Thriftbooks.com Terms of Use | Privacy Policy | Do Not Sell My Personal Information | Accessibility Statement
ThriftBooks® and the ThriftBooks® logo are registered trademarks of Thrift Books Global, LLC