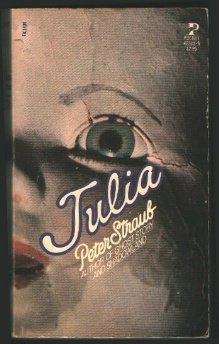 This description may be from another edition of this product. Julia's first purchase upon leaving her husband is a large, old-fashioned house in Kensington, where she plans to live by herself, well away from her soon-to-be-ex and the home where their young...

i’ll never get tired of this book

Published by mimi , 1 month ago
i’ve owned this book maybe ten years and have read it as many times and it’s still one of my favorites

Published by Thriftbooks.com User , 21 years ago
Straub, an American, does an astonishing job of conveying British culture and scenery in this novel. This is perhaps his greatest strength as a novelist, as similarly and yet so differently achieved in other novels, such as Shadowland and If You Could See Me Now.This novel opens with the protagonist, Julia Lofting, an American heiress, impulsively purchasing a fading mansion. We learn she has just been released from a mental institution proceeding the untimely and accidental death of her daughter. As tormented as she is by the death, Julia realizes it has finally broken the spell of enchantment of her domineering and brutal husband. She feels the purchase of the mansion, where she plans to live alone and reevaluate her life and its direction, will symbolically mark her first step down the road of independence and personal will.Ironically, it is the house which chooses her for its own expression of will. Julia runs into an eerie little girl in the park across the way who bears an uncanny resemblance to her own daughter. However, unlike her own sweet child, this girl is prone to mutilating small animals and terrorizing the other children of the park. Soon, the malevolent girl begins to appear in the bizarre black and red mirrors of the upper floors of the mansion. As a reader, we are uncertain at this point whether the sightings are strictly the hallucinations of a distraught and nervous woman, the spectre of her daughter come to haunt her or some demon, eminating from the mansion, toying with her. The rest of the novel delivers the answer in a tense and unrelenting series of climactic events.The characterizations and conspiring of the characters puts one in mind of Iris Murdoch. While characters bind together to make plans and imagine themselves engineers of events and perceptions, they are in fact being manipulated by outside forces of which they have no knowledge.DON'T READ THE FOLLOWING--SPOILER--IF YOU HAVEN'T READ THE BOOK: While the ending may seem unsatisfying, it in fact contains the entire theme of the novel. We realize that this story was not really about Julia, after all, but about the price of her husband's unchallenged reign of cruelty and callousness. Julia, never really a central figure in her own life, turns out not to be the central figure even of this novel which primarily features her.Her husband Magnus, "king", is seemingly born with a commanding and irresistable personality to which his entire family kowtows. Similarly, his first daughter, Olivia, is born with such an inherently unfeeling and dominating personality. However, being illegitimate and poorly treated by her mother, she has no checks on her own expression of the temperament. The force of her evil is something which cannot be stopped even by death. And she intends to focus her energies to wreak vengeance upon Magnus by destroying everyone close to him, one by one, before going after him personally. After Julia's death, Magnus and his spinster sister Lily are feeling

Published by Thriftbooks.com User , 21 years ago
One summer day, Julia Lofting buys a lovely home in a quiet street on the fashionable borough of Kensington, in London. This is the first house she sees, so it's rather hasty, isn't it? However, who could blame her?In Julia Lofting, Straub gives the first foray on the exquisite architecture of characters that has been a trademark of his craft. Julia, in a way, opens the path for other memorable Straub women, like Alma Mobley (in "Ghost Story"), Laura Allbee and Patsy McCloud (in "Floating Dragon"), Sarah Spence (in "Mystery") and more clearly, Nora Chancel (of "The Hellfire Club"), who in more ways than one seems a sister entity to Julia.Too wealthy for her own good, Julia is a troubled soul who seems to solve every situation by fleeing. She fled America for England, then she fled an unbearable freedom for marriage to charismatic yet voracious Magnus Lofting, a barrister with a name but no money and a few secrets in his past, then, she fled in tragedy and grief that marriage and an unhappy household in search for solace and the freedom she shunned, but in this lovely Georgian house, Julia finds she won't be able to run anymore, but rather will have to face multiple ghosts, from within and from the past.Perfectly written, well settled, with an unforgettable climax, "Julia" is Straub's first foray into the supernatural and it suceeds where other novels merely tried. The elements of melodrama and grand-guignol, which seem like recquirements for stories of this type, are schewed and in exchange, Straub follows the rule of the classic gothic novel (all the narrative elements are there, including the heroine, the castle and the ghost)-- including the obsessive fact that the past will become ever more important than the present itself, leading to the atmosphere of ominous angst that is one of the best effects of this memorable novel, that was first published in 1975.Definitely a novel worth reading; inspiring, haunting, and in more ways than one, unforgettable.

Published by Thriftbooks.com User , 21 years ago
It greatly saddens me to discover this wonderful novel is both out of print and boasts a mere 3 customer reviews! The book is sheerly one of the most horrific and terrifying studies in evil and obsession I have ever read. I first saw the marvelous (and also out of print!) film "The Haunting of Julia" starring the incomparably marvelous Mia Farrow, and then read the book. Both are great, though the book is more complex. I would recommend seeing the movie first however because then you can picture the wonderful house it is set in. The horror of a dominating spouse-Magnus is here....There is great suspense, who is haunting Julia, is it her beloved Kate? Or someone else.....Olivia Rudge is absolutely the most frightening ghost I have ever read about. The book scared me so much I couldn't sleep for a week or get the horrid frightening images out of my mind! I love the character of sweet Julia and this is a testament to Straub's great writing ability. This book is GOTHIC horror at its best, and has a twisty ending also.
Copyright © 2020 Thriftbooks.com Terms of Use | Privacy Policy | Do Not Sell My Personal Information | Accessibility Statement
ThriftBooks® and the ThriftBooks® logo are registered trademarks of Thrift Books Global, LLC