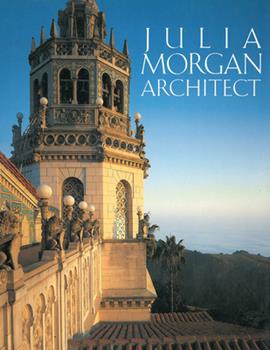 William Randolph Hearst's dazzling "castle" at San Simeon, California, is famous world round, yet only the aficionado can name Julia Morgan as the architect who built it. For more than thirty years she worked with Hearst in a rare collaboration, creating not only his art-filled hilltop palace but also a fairytale Bavarian "village" known as Wyntoon and many other commercial and domestic structures. Yet the Hearst commissions, notable as they are,...

Published by Thriftbooks.com User , 13 years ago
If you love architecture you will be familiar with Julia Morgan. Well, maybe not. Ever heard or seen Wm Randolph Hearst's castle, San Simeon? Ahhh, now you recognize the architect, Julia Morgan? Maybe not. Until I came across this beautiful book on Julia Morgan by Sara Holmes Boutelle I really didn't know much about the work of Julia Morgan. Just try and google or yahoo her name. There is frustratingly little written about this powerhouse of an architect. Morgan, according to Boutelle, was a versatile architect and according to the beautiful pictures in this book it proves the woman's talent. Because of this book I will seek out more of her still standing structures during my travels. This book will enlighten you to Julia Morgan's early childhood years and take you through her groundbreaking entrance (1899) into the highly acclaimed Paris school, Ecole des Beaux-Arts, which relented a strict 'male only' code to include Morgan. There are enough pictures and information to make you want to seek out even more knowledge about this interesting lady. And that, and only for that, am I giving this book only four stars. I closed it disappointed that I didn't have floor plans to some of the pictures(those included were so small even a magnifying glass was useless). I yearned for more information on the hows and whys of what Julia Morgan created. And exact locations to finding her beautiful work would have been wonderful. Hey, I think there's a book there if someone is up to the exhaustive work. Still, I am very happy I purchased this book, I will treasure it and go back to it often. Julia Morgan, Architect is part of my architectual library and I highly recommend it for architectual enthusiasts, interior and exterior designers and those studying for the architectual field.

Published by Thriftbooks.com User , 14 years ago
This is an outstanding book on Morgan's life and work. Well written text, detailed history, biographical information, and quality photos of the many buildings are just of few of the book's strong points. Morgan designed hundreds of buildings during her over 50-year career, and the author deserves credit for covering so many of them. Of course, she is most famous for the projects she did for Hearst, such as the "Castle" and Wyntoon, the Austrian/Bavarian style estate near Mt. Shasta in northern California, but she created many other important buildings also, which get discussed in detail in this fine volume. Also included are scans of the original plans. Out of all the books on Morgan, this one is by far the best, and well worth your time and money. A little side note here, I've done five different tours of the Hearst Castle over the years, so have had an opportunity personally to view one of her most important works. During one of the tours, the guide said that a few years ago they had a 6.4 magnitude earthquake there, but except for a few tiles that came off here and there, the castle sustained no damage. That's because despite the delicate looking surface ornamentation, underneath the building is steel reinforced concrete, with even thicker walls than necessary. As a result, the entire Hearst Castle sustained almost no damage during the quake, and no structural damage, and the only really dramatic thing that happened was the guide said that the quake shook things violently enough so that a lot of water sloshed out of the big Neptune pool. :-) One of the guides said some interesting things about Hearst's wealth. By the standards of the time, he was certainly very wealthy, earning $50,000 a day back in the early 30s. But compared to the most wealthy people of the day, such as Rockefeller, who made one million dollars a day, this was relatively modest. Hearst was the 42nd wealthiest man in the U.S. at the time, his father, George Hearst, being 32nd, if I remember right. He spent 9 million dollars on the Castle, approximately one half a year's earnings, so percentage-wise, it was not that much money for him. But compared to the super-wealthy of the day, such as the Morgans, Rockefellers, Vanderbilts, etc, apparently it wasn't much. :-) Back in the financial panic of 1905, J.P. Morgan, one of the wealthiest men of his time, lent the U.S. government 20 million dollars of his own money, back when that was a lot more, so it could temporarily keep operating. When Morgan died, Rockefeller commented, "He accomplished a lot for a man who wasn't that wealthy." Anyway, just a few perhaps irrelevant comments on some of the history of the wealthiest individuals of the time. :-)

Published by Thriftbooks.com User , 21 years ago
I have always been interested in Julia Morgan's work but I have never been able to find enough solid and valuable information about her and her work. I own all of the Julia Morgan books, that is every book written about Julia Morgan. This, by far, is the best composition of the true character of Julia Morgan. Not only do you get an entire biography with incredible detail but you also get insight from hundreds of pictures, scans of actual plans Julia Morgan drafted and entires from other important persons. This book is a must have if you are looking for "the" book covering everything in Julia Morgan's life. This book stands alone among all the other Julia Morgan reads. I suggest that if you are looking for a book about Ms. Morgan, this is the best book, brings the greatest attention to detail that you will ever find about Julia Morgan.

Wonderful Review Of A Forgotten Master

Published by Thriftbooks.com User , 21 years ago
A wonderful survey of a truly great Architect. Great photos. Original drawings. A detailed career history & biography. Most of the better known masters haven't gotten this kind of treatment; Ms. Morgan deserves it. GREAT book.
Trustpilot
Copyright © 2022 Thriftbooks.com Terms of Use | Privacy Policy | Do Not Sell My Personal Information | Accessibility Statement
ThriftBooks® and the ThriftBooks® logo are registered trademarks of Thrift Books Global, LLC