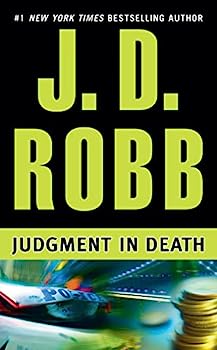 This description may be from another edition of this product. When a cop killer cuts loose in a club called Purgatory, New York Detective Eve Dallas descends into an underground criminal hell in this novel in the #1 New York Times bestselling In Death series. In...

Published by Dana , 11 months ago
I've read through the series, definitely not in order. I love this series. The creativity, the imagination and the characters. In case you're curious, you don't HAVE to read the series in order. I would start with the first few just so you get an idea of the characters and the setting. Then read them at will. They're all pretty great. Roarke. Sigh. Enough said. And Eve, she's a tough cookie, so when she gets soft, it gets really real. And makes her more human and believable as a character that you just adore and admire.

A great addition to a remarkable series!

Published by Thriftbooks.com User , 19 years ago
Judgment in Death begins when a murder is committed in a high-class strip club. Which Roarke owns. The victim is an off-duty detective who was working part time as a bartender in the club. Eve is on the case and she isn't becoming popular with her fellow cops during the investigation. The game plan used in the book of finding the killer is unique. There's a really nasty man that you will love to hate. Eve and Roarke's relationship just keeps you on your toes. Eve is developing as a character with more depth, softness and humor. JD Robb's greatest strength lies in dialogue and character development with each book, you get just the right amount of new insight into Eve, Roarke and the secondary characters. Even with Eve's softening up she still has plenty of attitude and is always ready to kick some butt. A great read and a terrific addition to this very entertaining series. Start from the beginning if you haven't yet but this book is the best one so far!

ANOTHER WINNER FROM JD ROBB

Published by Thriftbooks.com User , 21 years ago
I am constantly amazed at this quality series produced by JD Robb (aka Nora Roberts). The story is unique, witty & hooks you after the 1st page! This series is a shining example of a fantastic and unique story that should never end!!! This edition of Lt. Eve Dallas does not disappoint the "In Death" fans! In my humble opinion its probably one of the best in the series (the original Naked in Death being the best). WOW - there is a lot of steamy action between Eve & Roarke (again) but the story has a great plot, in depth characters & great interaction between them. Eve has to track a killer that ultimately leads her into the seedy underworld. She has a series of murders to solve; corruption and deceit continue to impede her investigation which ultimately touches her life with Roarke. They both have to deal with their past & present. I cannot say more without giving the plot/story line away....The book is not only suspenseful, but sexy and humorous. I find myself laughing out loud at the antics of Peabody and McNab (again). The best & funniest line is from Dr. Charlotta Mira (about halfway in the book Eve has a "talk" with Dr Mira about Roarke) -- you'll know it when you read it...I read the book in 2 days! and will re-read it many times more... its definitely another one for my collection.I just don't think I can hold out another 12 months for the next "In Death" series.

A great addition to the series!

Published by Thriftbooks.com User , 21 years ago
Judgment in Death is the 12th book in the "in Death" series by J. D. Robb (aka Nora Roberts). Lieutenant Eve Dallas is called in to investigate the death of an moonlighting cop, Taj Kohli, in a classy strip club where he worked as bartender. As you might expect by now, the club belongs to Eve's husband Roarke. The case, however, is going to be tricky: dirty cops and departmental coverups that halt Eve at every turn. As she works hard to solve the case she earns enemies in somewhat unusual places: the dead cop's commander, Captain Roth, and the head of Internal Affairs, Captain Bayliss. One of her many leads leads her to Ricker, an old associate of Roarke who has been waiting years to get revenge on Roarke for taking away some of his business years ago. He'd love it if he could take Eve down as well, and is not above sending goonsqads to take care of her. Also returning to the book are Peabody, McNab, Feeney, Dr. Mira, Mavis, and Webster (of the IAB). If you liked the other books in the "in Death" series you'll love this one.

Published by Thriftbooks.com User , 21 years ago
Nora Roberts, writing as JD Robb, has once again given readers more of the things that are so appealing to loyal readers of the "... In Death" series: ordinary yet extraordinary characters and believable yet fantastic situations. Eve Dallas is standing for the dead, as always, yet this time it is for a fellow cop. Unlike "Ceremony...", in which the murder of a cop is the starting point, the murder of the cop in this remains, essentially, the focus of the story. The identity of the killer "could" be obvious to some but there is complexity to the situation. And yes, Roarke is involved - as always!The usual host of characters make appearances but most are in new and, at times, surprising capacities. Readers have seen, over the course of the series, the growth and development of the Eve/Roarke relationship - this book continues that fascinating and compelling journey. It also shows the ever-interesting relationships between: Eve/Mavis, Eve/Peabody, Eve/Mira... along with some surprises.Anyone who has read and enjoyed other books of the "... In Death" series will be pleased but not surprised - it is, after all, what we want and expect! (A well written and compelling story!) It is not a book to pick up as first of the series, the development of these characters is crucial to many aspects, but it admirably continues the series. Am I glad that I took the time to read it? YES. Will I re-read it? YES. Will I pass it on to friends? YES. Was it worth the money? EVERY PENNY! Will I buy the next book the day it comes out? WITHOUT A DOUBT!

Another great book from robb!

Published by Thriftbooks.com User , 21 years ago
This latest installment in the eve dallas series does not disappoint. Every book in the series has a different style and pace, but are all written with jd robb's masterful hand. In judgment in death, eve's caseload concentrates on cop-killers. most of the book revolves around the police force, where eve is the primary in handling the murders. There is not as much media madness on eve this time, but the pressure is on her to solve the series of murders of cops. Corruption within the force as well as an enemy of Roarke out for revenge are also central themes. Roarke's fans will be happy to hear that his role in this book is fair. The style of the book is fluid and contains robb's wonderful ability and talent to create suspense as well as the understanding of motivating human emotions. I can't say too much for fear of revealing the plot and ruining your enjoyment of it. Webster appears again, and we see the usual gang of Feeney, Peabody and McNab. this book, imho, is a great addition to the already outstanding series. If you are new to the series, it would be ideal to start at the first book, Naked in death. You won't regret reading this series because Robb writes so finely, with great character developemnt, consistency, humour and suspense. The plots in each book are creative and not dull at all. The romance between roarke and dallas is a bonus and is not neglected in judgment in death. Great book! get it!
Copyright © 2020 Thriftbooks.com Terms of Use | Privacy Policy | Do Not Sell My Personal Information | Accessibility Statement
ThriftBooks® and the ThriftBooks® logo are registered trademarks of Thrift Books Global, LLC