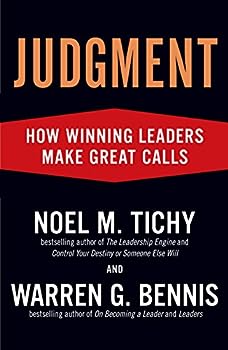 This description may be from another edition of this product. Leadership gurus Tichy ( Control Your Own Destiny or Someone Else Will ) and Bennis ( On Becoming a Leader ) examine the critical role judgment plays in effective leadership. Calling judgment the...

Published by Thriftbooks.com User , 13 years ago
Here's an important book on judgment and decision-making--and how leaders focus on the consequential. The authors write, "Jack Welch used to say at GE that if he wasn't careful with his time, he could spend days at the company's headquarters knee deep in bureaucratic crap and add no value to the company." Another customer reviewer here nailed the importance of this book. He called it a "gem among a sea of brain-dead business books." I agree on both counts. When Warren Bennis speaks, people listen. Normally, hot books create their own buzz, but my circles are not talking about this one yet. It's a weighty topic (392 pages) and a slim-jim novelette wouldn't do it justice. Judgment, preach the authors, is "the essence of effective leadership." It involves three domains: people, strategy and crisis. Interestingly, those are three of my 20 management buckets: the People Bucket, the Strategy Bucket and the Crisis Bucket in my book, Mastering The Management Buckets: 20 Critical Competencies for Leading Your Business or Non-profit. They call judgment the proverbial elephant on the table--because it's rarely addressed. "Without a deeper and more compelling understanding of how leaders exercise judgment, the study of leadership can never be complete," they write. "Take any leader, a U.S. president, a Fortune 500 CEO, a big league coach, wartime general, you name it. Chances are you remember them for their best or worst judgment call." Examples: Harry Truman (atom bomb), Nixon (Watergate), Bill Clinton (Monica), Coca-Cola's Robert Goizueta (New Coke), and Carly Fiorina ("for destroying HP's redoubtable culture"). The stories and anecdotes are rich, sometimes page-turning (wow--they do not like Fiorina). The 100-page "Handbook for Leadership Judgment" is a model for what's missing from other brain-dead business books. Buy it. Read it. Study it. You'll enhance your judgment and decision-making. Guaranteed.

Cracking the Code on JUDGMENT

Published by Thriftbooks.com User , 13 years ago
Hurrah for Noel and Warren. At the very prime of their careers, these distinguished scholars have pooled their knowledge and research to wade in to the deep end of the pool on the murky but critical subject of management judgment. This has been a domain in which many others have feared to swim because of the inherent ambiguity and almost certain exposure to criticism associated with such an interdisciplinary construct. Both authors have worked in tight with some of the most powerful transformational leaders on the planet. The sheer access these scholars were able to create to high-profile leaders embroiled in some of the major business crises of recent times is quite impressive. Less established scholars would have had to sit on the sidelines as distant observers or head for the basement to run yet another round of experiments on college sophomores. Yet, despite their clear association with these industry titans, Tichy and Bennis make a strong fact-based case against the "superman" idea, focusing instead on the critical information and influence that resides in the members of the team and among the stakeholders surrounding a great leader during times requiring major judgment calls. Here are some their more important insights into the phenomenon of judgment: - Judgment is not a discrete event or point decision. It is a process that embedded in and influenced by a set of relationships and a network of stakeholders. - Judgment should not be evaluated on the basis of taste or idealized style, but on the outcomes it produces. This squares well with a recent empirical study of leadership effectiveness at the University of Chicago, which has made a compelling case that successful leaders are not always the "nice" guys that many social scientists hope to find when they tour the leadership hall of fame. - Judgment is so important that it can't wait to be framed and developed until it is needed; leaders must make the time to create a point of view and align and engage their team and stakeholders around it before the moment arrives when a judgment call is needed. - The framework developed to make good judgments in high profile situations is just as relevant for general managers anywhere in an organization facing any major judgment call. - Of all the classes of judgment calls, the ones involving people are the most critical, from those involving the selection of an organization's new executive leader to those involving who should be on the leader's team. Perhaps the most important message of the book is that leaders must focus on creating a point of view and align their team and stakeholders around it well in advance of the immediate need for touch personnel, strategic and crisis calls. This book and the grounded insights it provides elevate leadership judgment to the level of other traditionally important general management disciplines. The bottom line on Judgment, and that is precisely where the authors fix their interpretation of a successful

Judgement is the real deal

Published by Thriftbooks.com User , 13 years ago
Bottom line on Tichy and Bennis's book: Good judgement is judged by the bottom line. Period. Did you succeed? Great. Then you made the right decision. In a way only Tichy and Bennis can, they dice out the stuff that makes you succeed. It's a brilliant wake up call for those of us who think simple rules will make us winners, and a strategic planning session for the ones who need to get these concepts imbedded into their team. Theories on leadership come a dime a dozen. These guys toss out the theories and get down to business. Maybe radical among talking heads in the business world, this model is well steeped in Tichy's background as a Ph.D. psychologist. Almost a century ago Skinner and others pointed out that a reward wasn't what was fun or what made you happy. It was the thing that caused you to do more of whatever it is the rewarder wanted. This bottom line approach to psychology changed child-rearing and treatment of psychiatric disorders forever. Tichy and Bennis may well change the way we make judgements in business forever. They dice up the good and bad judgements of great leaders inside and outside of commercial business. Then they show us how to do the judgement making. Judgement, they tell us, doesn't occur with the 'aha' moment in the middle of the night, nor does it occur when we cross the rubicon and tell our team of our decision. It happens over time-with thought, preparation, commitment, and execution. Failures anywhere make the judgement end up a failure, while comprehensive planning (a.k.a. hard work) make the judgement more likely to succeed. In my work as a teacher of leadership in health care I've had the great privilige of watching Tichy do his thing. When he's helping a corporation go through its metamorphisis, he prepares meticulously, negotiates strategically, then give every bit of energy he has to the clients' goals. The process is never a one-off. It's continuous with reinforcement and ongoing communication. And he succeeds. Clearly this book on judgement is not just his observation of others, but a model he himself has followed in his work. Following the lead of one of the world's great leadership experts is not a bad thing. Great stories, great insight, a fun read for those of us who need to ensure our judgements fall into the 'succeeded' category.

A breakthrough in management thinking...

Published by Thriftbooks.com User , 13 years ago
There a numerous books in the marketplace about management and leadership, but this one is unique. It takes a different perspective by examining leadership judgment. I highly recommend this book for current and wannabe leaders and those who develop, coach, and influence them. In the end, we evaluate leaders by the quality of the decisions they have made during their tenure. We've always thought judgment was something either you have or you don't have...not something you could learn. It was something that evolved over time. Tichy and Bennis have found a way to help leaders sharpen their ability to make good judgment calls and they have articulated it in an easy-to-understand process. Leaders of all levels make decisions about people, strategy, and crisis. Knowing what types of knowledge are needed to make successful calls, and how to successfully execute those decisions are the components of good judgment. Tichy and Bennis show us how.

Published by Thriftbooks.com User , 13 years ago
This is the first book on which Noel Tichy and Warren Bennis have collaborated. Separately, each has already authored or co-authored several of the most influential business books, including Tichy's The Cycle of Leadership: How Great Leaders Teach Their Companies to Win and The Leadership Engine as well as Bennis' Geeks & Geezers (later reissued as Leadership for a Lifetime) and On Becoming A Leader: The Leadership Classic. In the first chapter, Tichy and Bennis assert that what really matters "is not how many calls a leader gets right, or even what percentage of calls a leader gets right. Rather it is important how many of the important ones he or she gets right." They go on to suggest that effective leaders "not only make better calls, but they are able to discern the really important ones and get a higher percentage of them right. They are better at a whole process that runs from seeing the need for a call, to framing issues, to figuring out what is critical, to mobilizing and energizing the troops." Of special interest to me are the different perspectives on the decision making process preferred by a number of exemplary CEOs who include Brad Anderson (Best Buy), Steve Bennett (Intuit), A.G. Lafley (Procter & Gamble), James McNerney (Boeing), and David Novak (Yum! Brands). For example, Immelt's "Boom, I make the decision" comes after he has obtained all the input needed. "There is a moment when, based on his view of time horizon for the judgment and sufficiency of input and involvement, the leader makes the call." According to Tichy and Bennis, there is a framework of three "critical domains" within which all decisions are made. Judgments about people are the most difficult, and most critical; the others involve strategy and crisis. They stress that good judgment calls are a process, not an event. Each begins when a leader recognizes a need and frames the decision to be made, with the process continuing through execution and adjustment. They also stress the importance of possessing sufficient self-knowledge because making a right call "isn't a solo performance; support teams are vital." I appreciate the fact that Tichy and Bennis employ a framework of their own when presenting the material concerning the "framework of leadership judgment." Specifically, they anchor several exemplary, real-world decisions in terms of their storyline and then their preparation, judgment, execution, and evaluation phases. For example, Tichy and Bennis provide this excerpt from CEO Magazine in which A.G. Lafley explains the storyline for the future success of P & G, one that created the stage to make critical judgments: "Everything begins here with our purpose. It's very simple. We provide branded products that improve everyday lives. The values of the company are integrity, trust, ownership, leadership, passion for service and winning...Then we turn to strategy which is choices. Our whole focus has been to grow and profit from the core - and that me
Copyright © 2020 Thriftbooks.com Terms of Use | Privacy Policy | Do Not Sell My Personal Information | Accessibility Statement
ThriftBooks® and the ThriftBooks® logo are registered trademarks of Thrift Books Global, LLC