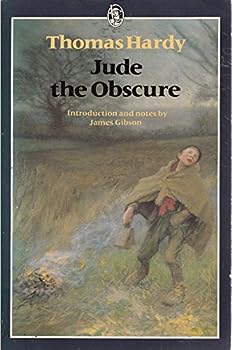 This description may be from another edition of this product. "I'm an outsider to the end of my days " Jude Fawley's hopes of a university education are lost when he is trapped into marrying the earthy Arabella, who later abandons him. Moving to the town of...

Published by Thriftbooks.com User , 16 years ago
One of my favorites - even by today's standards, Hardy's novel is wildly forward-thinking and shockingly real. The character of Sue Bridehead is one of the most complex and intriguing characters in Victorian literature. Torn between tradition and modernity, she cannot reconcile the world she lives in with the one she envisions. She and Jude are alike in that way, and it binds them to each other in a way that is inevitably tragic. JUDE THE OBSCURE examines what few novels dare to explore, and none as eloquently: the undeniable link between superstition and religion; the absurdity of entering into a marital contract; and the cruely of a society that breaks those that do not fit within its mold. Heart-breaking and narratively unmatched, Hardy's novel is a cautionary tale that, more than 100 years later, shows us how much as a society we have yet to overcome.

Published by Thriftbooks.com User , 19 years ago
Jude the Obcure is really a book about life. It involves Jude's search for happiness. Of course, he never quite achieves happiness because something is always in the way-preventing him from being happy. He starts out as a young lad living with his working-class aunt, dreaming that one day he may study at Christminster. The problem is as he grows he falls in love with a devilish girl named Arabella who tricks him into marrying her. Inevitably the marriage goes sour and he goes to Christminster, while she moves to Australia. Jude then meets his cousin Sue. He sets her up with Phillotson and they get married. Sue is then not happy and leaves to live with jude. As you can see this is really just a soap opera, but isn't life really just one big soap opera. Arabella then comes back to Jude with a son in Australia. Basically Jude feels responsibility to go back to Arabella and Sue goes back to Phillotson. Jude then dies soon after.It's quite interesting how Hardy devises his plot. It's quite a dark novel, filled with every character's problems. Through this book we see that what society thinks is the right thing to do isn't always best for everyone. The climax of the book is a horrifying murder-suicide of Jude's children. This is no doubt a book that makes you think about the psychological aspect of life. It's a good read if you like the fact that none of the problems actually get resolved and trying to solve problems only makes new ones.

One of the great ones.

Published by Thriftbooks.com User , 21 years ago
As are Hardy's other books, Jude the Obscure is not an "easy read." Appreciating Hardy's work requires a little work and the ability to pay attention and to think a little along the way. But the effort pays off. Jude the Obscure is a great book about the human condition, at least as it exists for many people. Like other Hardy characters, Jude Fawley makes a mistake early in his life and continues to pay the price until the day he dies. He commits an act of folly that seals his doom, and nothing he can do can make it right. This would be merely sad or melodramatic were if not for the fact that Jude is a truly good man with truly good intentions. It is this that makes his story truly tragic. Not only is he trapped by the consequences of his early act of foolishness, but he is also trapped and eventually dragged down by the conventions of a society that is more concerned with status and class than with character and ability and more devoted to mindless tradition than to a considered morality. Most of what can be said of Jude also be said of his love, Sue Bridehead, although I found her to be a less believable and sympathetic character. I was surprised by the frankness with which Hardy deals with sexuality in 1895, and I can understand now the furor this book apparently caused in Britain and America upon publication. Hardy is a writer of great power and insight. He also knows how to build a great story. And he is a novelist of ideas. He has his faults, of course. At his worst, he is wordy, obscure, and pedantic. But at his best, he is one of the most emotionally moving of writers. At times his books flash briliantly with passion. At times, he is heartbreaking. Jude the Obscure is a novel that no lover of fine writing and a great story can afford to miss. The novel has haunted me for weeks since I read it, and it probably will for a long time.

Published by Thriftbooks.com User , 21 years ago
Supposedly, this book was burned by the Bishop of Wakefield when it was first released, and Hardy's wife was furious at him because people would think it was autobiographical. The response to the book was the final nail in the coffin that caused Hardy to stop writing novels.Jude Hawley is born into a changing world-- a world that's changed enough that a poor boy can dream about a university eduction and a professional future. However, it hadn't changed enough for that dream to yet be realizable. Hawley instead is entrapped into a hasty marriage and sacrifices his dreams of further education. Even after the marriage is dissolved by the wife removing herself to Australia, Jude continues to be haunted for the rest of his life by his early mistake-- dooming himself and his true love to a lifetime of misery.The book is bleak. The characters (Jude and Sue, primarily) can't live with the choices that law and religion demands, but they can't live outside them either and their attempts to do so only drive them down deeper. The central thesis of the book, and the one that was so shocking a the time, was that these moral and legal strictures prevented people from fulfilling their dreams and living happy lives. Jude the Obscure challenges the sanctity of marriage by building a tragedy about people trapped by its convention.An important and challenging book. It continues to be relevant today.

An excellent read for college students.

Published by Thriftbooks.com User , 23 years ago
For an author who considered his poetry to be greater than his prose, Thomas Hardy clearly demonstrates his unswerving ability to create a masterpiece. Characters from the ambitious Jude to the spineless Sue paint a poignant picture of 19th century Victorian society. For those who collect banned books, a must have. This critical example of Victorian England is a great thesis to expand one's ideas on. Overall, a magnificent book.
Copyright © 2020 Thriftbooks.com Terms of Use | Privacy Policy | Do Not Sell My Personal Information | Accessibility Statement
ThriftBooks® and the ThriftBooks® logo are registered trademarks of Thrift Books Global, LLC