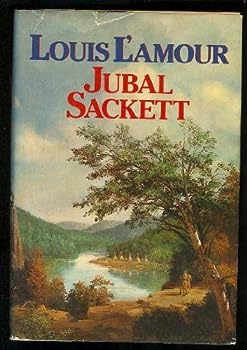 (Book #4 in the The Sacketts Box5 Series)

Filled with action, adventure, mystery, and historical detail, the Sackett saga is an unforgettable achievement by one of America's greatest storytellers. In Jubal Sackett, the second generation of this great American family pursues a destiny in the wilderness of a sprawling new land. Kindred spirits on a restless quest... Jubal Sackett's urge to explore drove him westward, and when a Natchez priest asks him to undertake a nearly impossible quest,...

Published by Thriftbooks.com User , 15 years ago
A very good story. I would have liked to know more of what happened before it ended. I found out that there are 3 books in the series that I needed to read before this one so I ordered them today. I would recommend this series to my friends and family.

Published by Thriftbooks.com User , 19 years ago
This is the story of a young man who is sent Westward by his father to find a new home in the valley of the river named The Tennessee. Jubal travels by foot and is tracked by a Native American early in his journey. They become friends and decide to travel together. Through their growing friendship the reader learns of traditions and beliefs of a variety of tribes.The narrative, written in first person, often has a poetic lilt that reminds me of "Evangeline.""Endlessly wound the river along its timbered banks, brushing the roots of leaning trees, heavy with foliage. Dead trees, uprooted far upstream, were a danger to birchbark canoes, and at no time dared we to relax. Around each bend, and the twists and turns were many, might lie enemy Indians or some obstruction to rip our bottom out." Native customs enrich the narrative. Describing Jubal's attempts to communicate with members of another tribe, L'Amour writes, "We had fumbled together a way of speaking. We knew some Cherokee...although Indians who knew the language of another tribe were rare..."L'Amour's love of classical literature and books seeps into his writing like a vein of mineable golden prose, saturating it with abundant information on a myriad of subjects. It makes the history he writes far more interesting than it might have otherwise been.

Thrilling listening -- a "must" for all Louis L'Amour fans.

Published by Thriftbooks.com User , 21 years ago
The unabridged presentation of Louis L'Amour's Jubal Sackett will thrill listeners of Westerns: a wilderness explorer crosses a savage continent to become a legend among Indian tribes as a powerful medicine man. The story has many involving twists and turns.

Published by Thriftbooks.com User , 22 years ago
Jubal Sackett was always one of my top 5 favorite books because of it's humanly unimaginable whirlwind of words that puts you the closest to actually being there. I read the detailed 341 page book in only three days and after it was finished I felt as if I had just learned to speak a new language. It seems to be a sketch with words used as lines and the final picture is simply a detailed masterpiece of understanding human behavior.

Published by Thriftbooks.com User , 23 years ago
Wow! I really enjoyed this book. The character of Jubal Sackett was very well developed and set in a historically correct period. I found myself walking in his footsteps as he went further and further west. The story arouses the explorer instinct in all of us. I intend to read more of the Sackett sagas.
Copyright © 2020 Thriftbooks.com Terms of Use | Privacy Policy | Do Not Sell My Personal Information | Accessibility Statement
ThriftBooks® and the ThriftBooks® logo are registered trademarks of Thrift Books Global, LLC