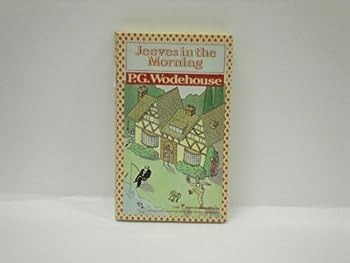 Jeeves in the Morning

(Book #8 in the Jeeves Series)

Follow the adventures of Bertie Wooster and his gentleman's gentleman, Jeeves, in this stunning new edition of one of the greatest comic novels in the English language. Steeple Bumphleigh is a very... This description may be from another edition of this product.

The book was good,

Published by Ok , 2 years ago
The book was good, but as soon as I took the book out of the package the cover fell off. So it wasn't really in "good" condition. But it was free so whatever.

Published by Thriftbooks.com User , 18 years ago
P.G. Wodehouse could write a phonebook and make it brilliant. But this story is so incredibly good that words fail me. He weaves farce upon satire upon mystery upon suspense upon hilarious premise and delightful payoff until the reader is dizzy with laughter and awe. The usual suspects are here: Bertie Wooster and his butler, Jeeves, plus frightening debutants, pompous authority figures, shrill relatives, troublesome children, and yet another pleasant English country village...pleasant, that is, until Bertie & Co. come along. Wodehouse was the absolute master of the English language, of humor, and plot construction. This book is as good an example of his mastery as there is. My only regret is that the reading experience passes by too quickly.

The Master at his Best

Published by Thriftbooks.com User , 19 years ago
I would not willingly try to judge which is Wodehouse's best book, for it is a hard task, as each of the Master's works shine in thier own special way. But if i had to, and there was no other way, then it would have to be Joy in the Morning.This is a classic story of Bertie Wooster and Jeeves, his valet, or as Jeeves puts it "his gentleman's gentleman". There are several books featuring Bertie and Jeeves and like all the others this one is a cracker.Bertie has to go to Steeple Bumpleigh, the lair of his horrendouns Aunt Agatha, to assist his uncle pull of a tricky business deal. Confusion ensues when he gets engaged to the wrong girl - the overbearing, always-moulding Florence Craye. The situation is especially hard for him, as also in the cast of characted is Stilton Cheesewright, who thinks Bertie as a snake and butterfly, and wants to clobber him. Add to this a business magnate from Long Island, an eccentric author, and a boy scout bent (pun intended, read the book and you shall find out) on helping all around him, and its a recipie for the worst kind of disaster for Bertie. Thank god he has Jeeves on hand to extricate him from all the doodah.A superb read. Dont give this one a miss. Remember, a man who is tired of Wodehouse, is a man who is tired of Life.

Published by Thriftbooks.com User , 20 years ago
Published in the U.S. as "Jeeves in the Morning," Overlook Press has restored the original British title for this nicely produced cloth edition. Regardless of the title, Wodehouse's 1947 novel is a superb comedy of language and manners (or lack thereof), in which both screwball and slapstick enhance the absurd situations Bertie Wooster and his valet Jeeves create for themselves. The supporting characters are marvelously drawn. There's Florence Craye, "one of those intellectual girls, steeped to the gills in serious purpose, who are unable to see a male soul without wanting to get behind it and shove," and her jealous fiance Stilton Cheesewright, "one of those touchy lovers who go about the place in a suspicious and red-eyed spirit, eager to hammer the stuffing out of such of the citizenry as they suppose to be or to have been in any sense matey with the adored object." The disheveled writer Boko Fittleworth looks like "a cross between a comedy juggler and a parrot that has been dragged through a hedge backwards." Florence's brother Edwin is a Boy Scout with a "kink in his psychology which made him such a menace to society"; her father is "one of those men you meet sometimes who only listen to about two words of any observation addressed to them." Even the characters who never once make an appearance add to the delirium. A victim of various intrigues executed by main characters, the American industrialist J. Chichester Clam remains entirely off-stage, "probably convinced that all this must be that Collapse of Civilization of which he had no doubt so often spoke at the Union League Club." And the fear of the wrath of the matriarch Aunt Agatha, away visiting her sick son, keeps all the characters in check. This mix of oddballs insures that engagements are broken, property is destroyed, business deals are ruined, and animosities are renewed--and, as always, it falls to Jeeves to set everything right with a mix of luck, connivance, outright deceitfulness, and wisdom culled from Shakespeare (who, according to Bertie, "sounds well, but doesn't mean anything"). For such a light, easy read, "Joy in the Morning" is an unexpectedly satisfying novel.

Published by Thriftbooks.com User , 22 years ago
This is the culmination of the art of Wodehouse, the Mozart of formula fiction. One of the two best Jeeves novels, it really should be read after Code of the Woosters, though it can also stand alone. Nobody had Wodehouse's way with the english language, and what other farce-humor writer could equal the gleaming precision and intricacy of his plots? This novel was polished to perfection because he used the time he spent in internment during World War II to work on it, thus giving it more time than probably any of his other books. In England it was called Joy In the Morning, but by any name they don't come much funnier.

This is the most re-read book in my library

Published by Thriftbooks.com User , 24 years ago
This was my first foray into the delightful world of Bertam W. Wooster and his manservant, Jeeves. I remember a specific moment in time when I realized that I held a priceless treasure in my hands. I sometimes wish that I were ignorant of the works of Wodehouse so that I might relive that magical moment- this book is that good. It is a pleasure to revisit every now and then, to appreciate what a masterful job Wodehouse has done in constructing his characters, their relationships, and sticky situations which seem to befoul our featherbrained protagonist. If you have not yet experienced Wodehouse and you have an appreciation of wit, I would be surprised if you do not have the same kind of epiphany I did before the conclusion of the second chapter. Enjoy!
Trustpilot
Copyright © 2022 Thriftbooks.com Terms of Use | Privacy Policy | Do Not Sell My Personal Information | Cookie Preferences | Accessibility Statement
ThriftBooks® and the ThriftBooks® logo are registered trademarks of Thrift Books Global, LLC