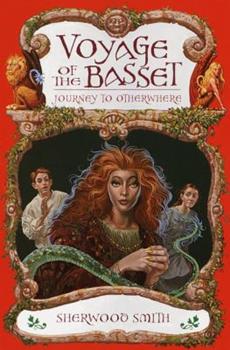 Journey to Otherwhere (Voyage of the Basset)

(Part of the Voyage of the Basset Series)

Bradford Ellis believes in progress--and in fixing other people's problems. His latest case study, a poor seamstress named Lucy Beale, resents his meddlesome attempts to improve her life. But when a small, stately ship--the Basset--sails into the harbor, Brad and Lucy must journey together to the Lands of Legend. There, the transformative Chimera challenges their assumptions and awakens their imaginations. In this land where fantasy rules and nothing...

Published by Thriftbooks.com User , 20 years ago
This is a fun read reminiscent of the Chronicles of Narnia, though not as richly developed. Still, the story is appealing for its straitforward message and enjoyable setting.I respectfully disagree with the librarian who compares this book the the Harry Potter series. While the Potter books are excellent, not every fantasy written since is an attempt to "jump on the fantasy bandwagon". I would hate to see all new young adult fantasy labeled as copy cats, which is what happened to adult fantasy for years after Tolkein. This is a fun series, and worth checking out.

Published by Thriftbooks.com User , 21 years ago
This third story in the Voyage of the Basset series is the best yet. The tone is the surest of the three, evoking a kind of late Victorian fairy-tale feel. The book works best if the reader is familiar with Christensen's original Voyage of the Basset, which explains the importance of the necklace, and the magical world into which the Basset sails.The two children are surprisingly complex for so brief a tale. For once the protagonists are not fighting against Impossible Evil, but against their own weaknesses.But it's not didactic. Humor and wonder and glimpses of myth from other cultures, instead of the usual Celtic or Greek, make it a must for children's collections.

Published by Thriftbooks.com User , 21 years ago
This book is the third in the series of "Voyage of the Basset"-and possibly the best! It's about a boy named Brad who believes in Progress. He also believes in helping others: except somehow his experiments always seem to go wrong. One day he meets Lucy, a poor girl who works as a servant at the boarding school he goes to. He decides to "improve" her mind-except he kinda forgot to ask her first. However, he goes on with his plan, and when he decides to take Lucy on a tour of a the Basset, something happens that neither of them counted on. They are whisked off on the Basset to the Lands of Legend. There they see many wonderful and interesting creatures. They visit the College of Magical Knowledge, meet the Chimera and do much, much more. Brad can't believe his eyes! And neither can Lucy. They both learn new things about magic: and each other. Join Lucy, Brad, and the crew of the Bassett for a voyage you'll never forget!
Copyright © 2020 Thriftbooks.com Terms of Use | Privacy Policy | Do Not Sell My Personal Information | Accessibility Statement
ThriftBooks® and the ThriftBooks® logo are registered trademarks of Thrift Books Global, LLC