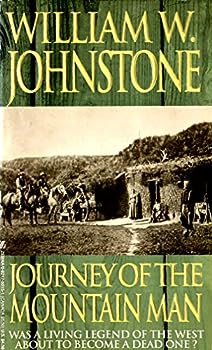 Journey of the Mountain Man

(Book #5 in the The Last Mountain Man Series)

This description may be from another edition of this product. Blood On The Range Smoke Jensen couldn't have cared less that a range war had erupted in Montana. But his cousin Fae was stuck right in the middle of a hundred-gun showdown that was about to explode...

Another great story by William Johnstone

Published by Thriftbooks.com User , 13 years ago
This is another in the Mountain Man series that those familiar with Johnstone's work, and those new to the author, should definitely read. Smoke Jensen gets a letter from a relative while home at his ranch. He takes off, of course, to help out family. For those who keep track, it is 1882, and Smoke and Sally's twins are one year old. With the help of his old mountain man friends, Smoke saves the ranch for his cousins, brother and sister, and with his friends to help, a bunch of bad guys cease to populate the earth. Even his prissy cousin, as Smoke describes him, finally turns out to be quite a man after all. The story is just as exciting as all the others by Johnstone, and I highly recommend it.

Published by Thriftbooks.com User , 18 years ago
Smoke Gets a Letter from a cousin asking for help. Smoke nevers turns away people in need, and definetely not family. So Smoke packs up and heads for Montana. On the way he looks up some old tough mountain men friends. He knows the battle will be tough and he might even loose. But if he did how would we be able to read another book? Maybe he will win!!

Please get the story right!!

Published by Thriftbooks.com User , 19 years ago
In a review that I read on the book The last mountian man(where Smoke Jensen first comes into play) he is known as Kirby Jensen.Not untill later on in the book is he referd to as "smoke".Also Preacher didnt take Smoke under his wing after Smokes father had been killed.Preacher had taken Smoke to teach him about being a mountianer and and teach him how to hunt and fight,basicaly train him in living in the mountians.Befor that winter Smokes' father was killed and Smoke spent the winter with Preacher praticing on pulling those 45's in a blur.Also it never mentioned that Smoke was a big man even when he was just a boy.The only thing that the person got right on his review was start from the beginning and read all the books it will make everything come into play when you get to where you are going.

BEST OF THE WEST

Published by Thriftbooks.com User , 20 years ago
William W. Johnston writes the best, hardest to put down series I've ever read. His books are facinating. They talk about men that my dad talked about when he'd tell his growing up stories.He could have been an old mountain man. This particular book, JOURNEY OF A MOUNTAIN MAN was the first one of the series I read.It takes place in Colorado, Wyoming, Montana, and Idaho. Since I was born and raised in Montana and lived in all the rest of these states made the books even more readable.Then when I finished the book I went to the used bookstore I trade at and found many more of the series that had come before. I have not went wrong with any book Mr. Johnston has written. He has several series out such as THE BLOOD BOND SERIES, and THE EAGLES SERIES, and THE LAST GUNFIGHTER SERIES. They are all great reads. I just loved them all. They talk about the magnificent West and the totally magnificent men that populated it. The books display humor (in some),honor,courage, and chivilary. This is what being a man is all about as far as I'm concerned. My husband even read all the ones I found, too. He was a strictly a Louis LAMour reader. I was thrilled to have found something he could read and enjoy that was not a repeat. Myself included.

Hard to put down. Must start with the first book - Great!

Published by Thriftbooks.com User , 23 years ago
A boy growing up, starting at the end of the Civil War. His father comes home after the war and they head west. They make friends with a famous mountain man who takes in the boy after his father dies. He teaches the boy everything to survive in the mountains.He becomes Smoke Jensen, a gunfighter by necessity and has many adventures. Marries and together begin ranching and fighting the badmen from Colorado to New York. Smoke fights for the helpless and his home. This is a series of books the start with "The Last Mountain". Also a short series about the mountain man, starting with "The First Mountain Man". Both series never get boring. In fact, they are hard to put down. The only western series I've enjoyed next to Louis Lamour's series "The Sackets".
Copyright © 2020 Thriftbooks.com Terms of Use | Privacy Policy | Do Not Sell My Personal Information | Accessibility Statement
ThriftBooks® and the ThriftBooks® logo are registered trademarks of Thrift Books Global, LLC