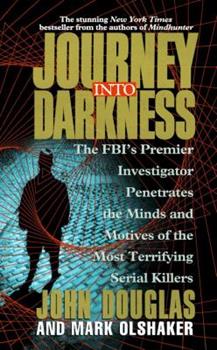 (Book #2 in the Mindhunter Series)

A former FBI investigator examines some of his most complex cases and demonstrates how criminal profiling works.

A real Journey into Darkness

Published by Thriftbooks.com User , 19 years ago
I have been an avid true crime reader for several years although this is the first book that I have read by John E. Douglas. This book makes you see the darkness that a lot of people seem to have inside and what they are prepared to do to realise their fantasies whatever the cost. I was not able to put down this book even though it filled me with anxiety and sadness because the title is true - he really does take you on a journey into Darkness, although John Douglases telling of these brutal cases is masterly. He explains even the most complicated of theories in a way that is understandable to all. After reading this book I have already ordered his other books and can't wait for them to be delivered. Gripping stuff!!!

Where is the ego?

Published by Thriftbooks.com User , 22 years ago
I disagree with those who believe John is egotistical. I don't see that at all.He was an FBI agent for 25 years. In the late 1970's he became a profiler. He's heard tales of torture and murder that are so horrendous that they defy description. He's sat across a table, numerous times, from some of the vilest human beings imaginable. He's seen sights that would make your stomach turn. For years, John was the sole profiler in his unit, working alone on over one hundred cases. When, I ask, did he have the time to become egotistical? And, as he has admitted, his talents are unable to provide the details of a suspect's identity, they can only help focus a police investigation. Throughout all this, he gained valuable insight into the minds of these monsters that some people might call human beings. Yet he's never lost his own sense of humanity, for his feelings of compassion for the victims and anger at the offenders are quite palpable. He's very honest and pulls no punches in his analysis of the sexually sadistic personality. Perhaps the people who think him egotistical can't handle this honesty. And he's absolutely correct - those who choose, for their own vile and selfish reasons, to take another person's life SHOULD pay with their own.I found the chapters on how to protect children from becoming victims to child molesters or infinitely worse species than that, and by this I mean child killers, particularly valuable. I don't have children, but if I do, I'll be following the information he gave on this subject right down to the last letter. Children are our greatest international treasures and it's up to every adult, not just parents, to keep them safe from sexual predators.

A read that scared the daylights out of me!

Published by Thriftbooks.com User , 22 years ago
Though this book still has John Douglas's usual pat on his own back all through it, it's truly a terrifying read.The only unfortunate part of the book is Douglas's rehash of the Simpson case (yawn), and his showing us how he'd profile the killer is a big bore.....and it's in here because John Douglas likes to talk about how good he is (and I'm sure he is....but the man has an ego problem).Aside from that profile, the reading is so scary that I couldn't sleep, and as far as true crime books, that rarely happens to me.It's an excellent read, and gives some worthy "tips" as far as your own self-preservation, and the safety of your children.In spite of Douglas himself, I enjoyed this book almost too much. I was afraid to go in front of my windows for days! Absolutely worth buying and reading...

Published by Thriftbooks.com User , 23 years ago
A super book that I couldn't put down. It made me feel like I knew the victims and their families. It also gave great tips on how to keep from getting mixed up with the weirdos among us. I hope he continues writing!

A powerful book about serial killers, and victims' rights

Published by Thriftbooks.com User , 25 years ago
Douglas opens with the murder of Marine Suzanne Collins in Tennessee in 1985, describing his own mental process in analyzing her killer's behavior. After discussing several other cases, he returns to the Collins murder for a very detailed, moving discussion of her life and death, and the difficult experiences her family has had with the legal system in the intervening years. Her parents became ardent campaigners for victims' rights, and against lengthy and frivolous appeals. Much of what Douglas writes on this issue reminds me of John Walsh, of "America's Most Wanted." Also reminiscent of "America's Most Wanted" is Douglas' advice on teaching our children how to avoid becoming victims of abusers, abductors, and killers. Having recently read Robert Ressler's excellent book, _Whoever Fights Monsters_, I was interested to note that Douglas and Ressler disagree on the value of letting serial killers live. Ressler advocates keeping killers alive for psychological study, but Douglas says it would take "about six hours" to learn all that he would need to know from a convicted serial killer. Beyond that, he says, a killer who claims to have more valuable information for police and psychologists is doing nothing more than looking for an excuse to avoid execution, and the quality of the information is suspect. Near the end of the book, Douglas considers a case in which profiling helped exonerate an innocent man. He also analyzes, from a behavioral standpoint, the murders of Nicole Brown Simpson and Ron Goldman, describing the sort of profile he would have developed had he been asked to consult on the case
Trustpilot
Copyright © 2022 Thriftbooks.com Terms of Use | Privacy Policy | Do Not Sell My Personal Information | Cookie Preferences | Accessibility Statement
ThriftBooks® and the ThriftBooks® logo are registered trademarks of Thrift Books Global, LLC