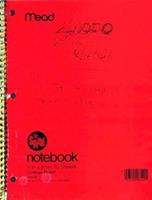 The lyrics notebook and personal journals of Kurt Cobain, iconic singer of the band Nirvana. Kurt Cobain filled dozens of notebooks with lyrics, drawings, and writings about his plans for Nirvana and his thoughts about fame, the state of music, and the people who bought and sold him and his music. His journals reveal an artist who loved music, who knew the history of rock, and who was determined to define his place in that history. Here is a mesmerizing,...

Very interesting & satisfied with my purchase

Published by TaurusBaby444 , 2 years ago
Even though this is only a few excerpts from probably several journals it’s still cool to get a peak at Cobains writings. I find it interesting & I appreciate that even some of the writing is hard to read because that makes it even more real. Reading this book actually inspired me to write again. So that says a lot.

This Is one of my all time favorite books!!!!

Published by Thriftbooks.com User , 3 years ago
As a writer, Kurt inspired me to be more honest and to really be myself and embrace my own style of writing. This book offers a rare glimpse into the head of the late great Kurt Cobain. This is an amazing book!!!! I recommend this to any fan of music or poetry! This book is pure poetry!!! VIVA KURT COBAIN!!!!!

Published by Thriftbooks.com User , 15 years ago
Okay, let's save the speech about me being a young black chick who's only exposure to rock in the early 90's, was using my brother's Green Day "Dookie" cd for a coaster. But you know what? I say...something must have sent me to the library on that fateful day a decade or so after his death. The day that I saw this book. Something drew me to it. Reading someone's diary is so intimate, don't you think? It makes you feel like you are right inside the most private place in the world: their head. Needless to say, I picked this book up for the pure curiousity. I didn't know I would soon get sucked into the soul of the most brilliant individual I've come to know about in the past few years. After finishing this book, I was stumped, like...Kurt thought he was worthless and uneducated, but he wrote some of the best stuff, unadulterated and raw, that mine eyes have read in a long time. The book was filled with his thoughts on society and love, drugs, success, rough-drafts (mainly letters to friends and bios on the band) and song lyrics. The man was a genius. And a prolific artist. There was one page where he chronicled his drug usage. He started heavily into it, when he developed a rare stomach stomach condition, where the lining of the stomach is inflamed, or something like that. He said after talking to various doctors and taking about 50 different medications that did very little to help, he started using heroine to take the pain away. I usually don't condone drug usage, but I understand how some people are drawn toward it. Especially in this case. He said his stomach condition got worse when he began the rise toward fame, being as he wasn't eating or sleeping properly. He said the band would have to cancel shows because he would be in the bathroom for days throwing up water and blood. Then he rehabilitated himself, and found a clinic in Japan that was able to produce a medicine for him that worked. But then he found it contained methadone...and he was "hooked" again. Finally, he found a medicine that was being used in experimentary methods, and it worked for him without side effects. But, as he said, once you get drugs into your system, you have to fight hard for a while, because you are always susceptible to that drug. As his was, a losing battle. He also had a problem handling fame, and he hated the ridicule that came with being misquoted by journalists and editors. Not only does Kurt "speak" his thoughts, he draws as well, and apparently he wasn't that bad at it. I was also surprised to find out that he had views about society that some white americans, would probably be embarrassed about. He had more than one drawing of KKK members about to be assassinated by a rifle-wielding sniper. The only downside is that there aren't that many entries after Nirvana grew to stardom. Courtney and Frances are barely mentioned, I guess that's to be expected with all the touring, appearances and Kurt's illnesss. There's not much more I can say about this bo

You be the Judge

Published by Thriftbooks.com User , 17 years ago
I've always been fascinated by Kurt Cobain. Although I'm only thirteen, I've sensed some sort of connection between me and his music. Like most people, I wanted to peek inside his mind; I wanted to know everything. Everything thought, every dream, every moment, every mood. Who doesn't? Maybe some would consider it violating, reading his own personal journals, but you just can't help but want to. And it was worth it. Do I feel guilty? Not at all.Kurt's journals are one of the fewer *real* life account diaries in which is genius. If anyone who has read the Diary of Anne Frank, you can bet Journals by Kurt Cobain is just as remarkable on its own. You can follow Kurt on the same journey as you did with Anne; Through the happy times, the sad times, and times when you just don't know how to feel but try to anyway. The outcome is amazing. Filled with doodlings, letters, funny yet sarcastic-mocking comics, shopping lists, and random writings from Kurt.You can also note from his writings that Kurt was not afraid to say what he wanted to say. He did not fear anyone, although sometimes he feared himself. He believed grunge and punk rock was more than multi-coloured hair, worn out Metallica t-shirts and wallet chains; He believed it was all about how you are and your attitude about everything. You couldn't just become it overnight.. It was something that was in your soul, like you already were it. He speaks of how he seemed to be lured into everything. And also how people judge without knowing, and how he could see through people, love people, and find good in everyone.I'm not telling you to read it. I'm not telling you not to read it. Some might argue it's an invasion of privacy, his privacy. That some things are better left alone, untouched, unjudged. Maybe so. Others might tell you to read it. What would it hurt? Maybe so. But if you really wanted to know Kurt, on a much more deeper level, more personal, I would say read it. But I'm not telling you, remember?'Don't read this when I'm gone. Okay, I'm going to work now. Look through my thoughts, and figure me out'-Kurt CobainIndeed, Kurt. Indeed.

Published by Thriftbooks.com User , 18 years ago
Aside from the obvious questions of the intrusive nature of reading this book, as well as the obvious monitoring of Courtney Love over all of the book's contents, "Journals" is absolutely fascinating. I feel that reading alot of things from Kurt as opposed to a journalist's point of view is very satisfying when pertaining to his art. I believe that, for Kurt, his art was the focal point for the bulk of his life. And I also think that once you understand his art, you begin to understand him. In that respect, I give "Journals" beyond 5 stars. Within the book, Kurt depicts himself as he was: a sensitive, artistic punk rocker. You read many letters to people such as Dale Crover from "The Melvins" and Mark Lannegan from "Screaming Trees". In a letter to Lannegan, he shamefully admits to copying their album onto a cassette tape. This only enforces the punk rock ethic that Kurt held for most of his life. The term "punk" for Kurt Cobain didn't necessarily mean pierced nostrils or multi-colored hair. Punk rock meant "freedom". It was back to the roots of musical expression: syphoning yourself through an instrument. It wasn't an image, and it wasn't a trend. There were no blinders towards the audience. It was be-yourself-do-it-yourself. It spoke to many people in an inaudible, enticing scream, and it definitely spoke to Kurt Cobain. It basically offered Kurt his way out from the blantant faccade of machismo and the ignorance of homophobia and sexism that he witnessed constantly. It sparked a flow of creative abandon and artistic defiance in Kurt. That raw, unbridled human emotion is very poignant and refreshing even ten years after his death. And the fact that real emotion is so void in music today, only lures people in to experience it for themselves. It's impossible to read this book and not get somewhat melancholy over what a sensitive, outspoken, brilliant artist we lost in Kurt Cobain. We have the music, we now have his journals, and we have the memories.

Published by Thriftbooks.com User , 19 years ago
The list goes on, but this is just a book you simply CAN'T put down. It is terrific insight into one of the most talented songwriter's of his generation, as well as to what goes through the mind of an addict. (Those who never dealt with addiction have a difficult time understanding the nature of addiction. Cobain at least gives disturbingly real insight into the mind of an addict) I also thought it was incredibly sad just how isolated this man was, despite his fame and surroundings.I felt Cobain came off as a much more gentle soul than my original perceptions of him had ever allowed me to consider. I felt almost like he forsaw his life spin out of control and was just overwhelmed by the thought of stopping it. I was thoroughly fascinated. Write him off as just another grunge-rocker junkie if you want, but if you want a fascinating portrait into a talent that hadn't even scratched the surface before it could reach it's potential, snap this up!

Published by Thriftbooks.com User , 19 years ago
a very insightful view into the world of Nirvana's front man. The journal entries are scans of the actual notebook/piece of paper used, in Kurt's own handwriting. There is also a helpful section in the back, should you have trouble reading certain pages. Though, in a way, I feel this violates Kurt's privacy, at the same time it brings this "voice of a generation" down to a very human level. This book also contains drafts of many Nirvana lyrics, and some GREAT illustrations by Kurt. Thanks go to all who were part of this effort. BUY IT. IT'S GREAT.
Copyright © 2022 Thriftbooks.com Terms of Use | Privacy Policy | Do Not Sell My Personal Information | Accessibility Statement
ThriftBooks® and the ThriftBooks® logo are registered trademarks of Thrift Books Global, LLC