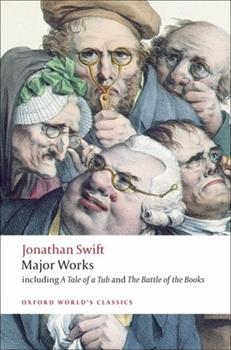 This authoritative edition brings together a unique selection from the full range of Swift's fifty-year career--prose, poetry, and letters--to give the essence of his work and thinking. Jonathan Swift (1667-1745) is best known as the author of Gulliver's Travels, which alone would have secured his place in the history of English literature. But in addition to this classic fictional satire, Swift wrote numerous works concerning politics, religion,...

Published by Thriftbooks.com User , 14 years ago
I like this book. It gives you a good introduction to Swift. If you like the man, which this book tries to present through letters, then you can later read a more complete book with his writings.

Published by Thriftbooks.com User , 15 years ago
Jonathon Swift, a wonderful Irish satirist long before such great Irish twentieth century parodists, ironists and satirists such as Joyce, Shaw, WIlde and Beckett, served as an inspiration for much of what is best in our twentieth century literature. Particularly post-modern is his Tale of the Tub which first satirized the then new conventions of the printed book, as well described by PRof. Hugh Kenner. This volume gives a full view of the spectrum of Mr. Swift's writings, beyond Gulliver. By the way, do read Gulliver unabridged (not Disney) to understand among other things how he put out the palace fire, and how he served as intimate toy in the land of the giants, and as always, get intelligent commentaries for fullest understanding and insight FOr the greatest in English literature beyond Shakespeare, turn to the Irish, always, odd for a nation whose greatest tale-telling tradition and tour-de-forces remain spoken rather than written.

Published by Thriftbooks.com User , 15 years ago
Gulliver's Travels has stood the test of time, but the question can still be asked: What kind of work is it? I would not qualify it as a "novel". Scholars continue to debate what "a novel" is and when it emerged in the English literature. My own feeling is that Gulliver's Travel is not part of "the rise of the novel". To begin with, it lacks the attention to detail and characterization that typify novels generally. In my opinion, there are many other reasons why GT cannot be deemed a novel. Unfortunately, there is not space enough to list them all. UGT is a satiric 'tale', not a novel. To prove that GT is a novel would be a large task. Indeed, when GT was published the idea of "character" as being important in writing was not firmly established yet. As for the notion that Swift taught satire to England, this is again debatable. Certainly Swift broadened satire, but satire typifies the seventeeth and eighteenth century in general. Dryden, especially, redefined satire in a major way, long before Swift. Regarding the claim that England produced/produces the best literature in the world, this is debatable. What about Germany and France? In the last 50 years, France has produced a considerable amount of Nobel Prize winning authors - far more than England. What about Russia? Dostyovski and Tolstoy are widely held to be the greatest novelists ever. To say that England reigns supreme, without having read French authors in French, German authors in German, Russian authors in Russian (and so on), is presumptious. To return to GT, it is chock-full of political allusions but enjoyable even to readers unaware of the politics.

Hey! Where's all the reviews?

Published by Thriftbooks.com User , 16 years ago
This book, the major works of possibly the greatest English writer to ever live (that's saying something since England has the greatest writers, well, until the Beat Generation came along)should have a very long list of reviews. I want to know about this book people! You are being selfish! Having read Gulliver's Travels, I can say that Jonathan Swift was a genius. These works have so much with their irony, wit, and expert satire to teach us. It contains Swifts two early works of prose, A Tale of a Tub, from 1704, exposes and satires abuses in religion. Swift was the Dean of the St. Patrick's church in Ireland. The Battle of the Books, written in 1696, but not published until 1704, was Swift's first book and I think it is in this great book. The Great Jonathan Swift (1667-1745)is usually known as the writer of the Greatest Novel of the 18th Century, Gulliver's Travels, but he is also known as Britain's greatest satirist. Swift is the one who taught the modern world how to satire and, like they say, "Whom Gods destroy, they first make mad." Swift went slowly insane after writing awesome works like Gulliver's Travels (1726) and A Modest Proposal (1729)because he was just too much of a genius for the human body to hold and because of the Menier's Syndrome and probable Alzheimer's Disease, October 19, 1745 was the day Great Britan and the whole world lost the greatest satirist to ever live. Somebody Write a REVIEW DAMNIT!!!

Published by Thriftbooks.com User , 21 years ago
This is a good collection of Swift's works. Many of his most famous tales and pamphlets appear in this collection including a Modest Proposal and the Wretched State of Ireland. The collection also includes a Tale of a Tub and Gulliver's Travels. This collection si a very comprehensive and adequate group of all who like Swift.
Copyright © 2020 Thriftbooks.com Terms of Use | Privacy Policy | Do Not Sell My Personal Information | Accessibility Statement
ThriftBooks® and the ThriftBooks® logo are registered trademarks of Thrift Books Global, LLC