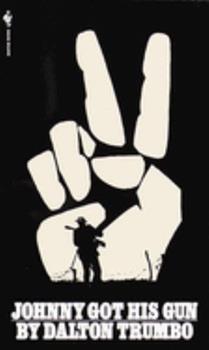 Johnny Got His Gun

"Mr. Trumbo sets this story down almost without pause or punctuation and with a fury accounting to eloquence."-- The New York Times This was no ordinary war. This was a war to make the world safe for democracy. And if democracy was made safe, then nothing else mattered--not the millions of dead bodies, nor the thousands of ruined lives. . . . This is no ordinary novel. This is a novel that never takes the easy way out: it is shocking, violent, terrifying,...

Published by Thriftbooks.com User , 16 years ago
"Johnny Got His Gun," by Dalton Trumbo, is a powerful novel. The Bantam paperback includes a fascinating introduction by Trumbo, written in 1959 with a 1970 addendum. The intro notes that the novel itself was written in 1938 and published just after the start of World War II. An "About the Author" page at the book's beginning notes that the Colorado-born Trumbo was one of the screenwriters blacklisted during the McCarthy era. "Johnny" tells the story of Joe Bonham, an American soldier who is horrifically wounded and disabled in World War I. The book is told from Joe's perspective as he struggles to understand and cope with his situation. His mind wanders back and forth between his past, including his war experiences, and his immediate condition. Thus we get a non-chronological but full picture of his complete life so far. Dalton's prose style in this book made a strong impact on me. At times he seems to be assaulting the reader without mercy as he shows us the horror of war and its terrible human cost. But the book also includes passages of hope, triumph, and heartbreaking beauty. Joe is an unforgettable character, and this truly disturbing book remains a profoundly relevant work of American fiction.

One of the best anti-war books ever written

Published by Thriftbooks.com User , 18 years ago
War is war. Innocent civilians die, families are ruined and soldiers are smashed to pieces on the battlefield. This book is gruesome. But it also serves as a valuable tool for those who question the wisdom of blindly following leaders into combat.This book is written with a fury. It is also one of the most horrifying accusations against war. To this end, it is arguably one of the best anti-war books ever written. Mothers and fathers should read this book before allowing their children to march off to war. It is the honesty and sincerity of this World War I tale that allows it to pass the test of time. "johnny got his gun," is a book that documents the gross stupidity that accounted for nine million corpses.

Published by Thriftbooks.com User , 20 years ago
In the extraordinary novel, Johnny Got His Gun, the author, Dalton Trumbo, reveals the truth about war by illustrating the struggles of a crippled man through the use of stream of consciousness. The story describes a man's journey after he is wounded in battle during WWI. The man, Joe, is a paraplegic who has no arms, no legs, and is deaf, blind and unable to speak. His every day struggles and feelings are revealed to the reader through examples of his past and his inner most thoughts.Dalton's fictional character, Joe Bonham, is exactly what his name states, just a regular "Joe." Before the war he had a girlfriend and a family that loved him. He went to school, had summer jobs, and hung out with friends, then came the war. He and all the other "Joes" had to leave behind the ones they loved and go defend a country that could not defend them. Throughout the novel Joe experiences flashbacks into his past. He recalls a summer when he spent a day performing the most grueling labor of his life. At the end of the day he laid there and felt his body ache in anguish as he said, "There was nothing real but pain." He then awakes from his past only to realize his present condition, to which he refers to himself as a "basket case." Another memory that he described was that of the last night he spent with Kareen, his girlfriend. They both knew that they might never see one another again, so they spent his last remaining hours of his civilian life together. As he awakes from this perfect moment in time he remembers his disable figure, and prays that Kareen or his family would never see him in that state. Dalton uses Joe's thoughts and feelings to paint a picture of perfection and simplicity before the chaos of war. The most evident form of communication throughout the novel is the use of Joe's thoughts, also known as his stream of consciousness. Dalton uses this method to create a character that you can't help but think is real. His wants and desires are the same as every human being, yet he is unable to accomplish them due to his helpless physical condition. In one scene he is lying in his hospital bed and feels the sun shining through the window on his body. He feels a sense of floating. "It's fine Kareen floating here. Lie back more like this like that. Isn't it nice Kareen I love it I love you." This is one of his more pleasant thoughts as compared to the gruesome pictures of pain and fear, shall I mention the rats? I didn't think so. The thoughts of Joe are ones of hope and determination, they leave the reader feeling that if a blind, deaf, and mute cripple can accomplish what he did, the By Golly, so can I! Joe Bohnam may not be a real man, but through reading this novel you realize that there are men in this world just like him. His thoughts are what allow the reader to be able to grasp the true feelings and effects of his character. In conclusion, this book creates a controversial sense of both nationalism and disgust. To k

Glory In War? Not after you read this book...

Published by Thriftbooks.com User , 20 years ago
There was a time when war was still noble and ticker tape fell freely on the heads of veterans; our American heroes. There was an era in US history when wars ended with extravagant parades while lovers were reunited after years apart. Dalton Trumbo's chilling novel, Johnny Got His Gun, is about that era--but there are no heroes here. This tale has nothing to do with the romantic homecomings and thrilling American victories. Johnny Got His Gun is about the atrocious reality behind the glitzy Hollywood definition of warfare. Set during World War I, Trumbo's novel tells the story of a brutally injured and disabled man. Isolation has never known such lonliness. The main character, Joe Boeham, describes himself as the "living dead man." He has no arms, no legs, no face, no tongue to speak, no ears to hear, and no eyes to see. This book is the thoughts of Joe Boeham, slipping in and out of time. He describes his past and you can feel the despair in him as he describes his present; his future. The authour's lack of punctuation gives the reader the notion that Joe Boeham has simply a string of thoughts; beginning nowhere and refusing to end. Boeham's goal in life is merely to live. No, not to breathe, not simply to have a steady heartbeat but rather to find in himself some remaining human characteristic. Lying beneath the surface, Dalton Trumbo incorporates Boeham's opinions regarding the draft, warfare in general, and fighting for a word: democracy. A thought provoking, page-turner, Johnny Got His Gun, is not a book you'll soon forget. This is a masterpiece that has touched the masses helping in the struggle to end the glorification of war.
Copyright © 2020 Thriftbooks.com Terms of Use | Privacy Policy | Do Not Sell My Personal Information | Accessibility Statement
ThriftBooks® and the ThriftBooks® logo are registered trademarks of Thrift Books Global, LLC