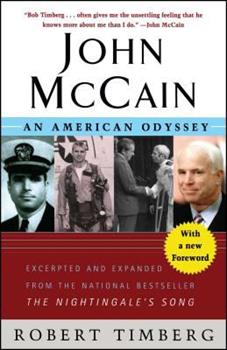 This reissue of the penetrating biography of Senator John McCain, the man who may be the next president of the United States, by celebrated author Robert Timberg now has a new foreword that updates readers on the politician's life since this book's original publication in 1999. In John McCain: An American Odyssey, Timberg provides a riveting account of McCain's remarkable life -- from his rambunctious childhood and his madcap escapades as a U.S. Naval...

Published by Thriftbooks.com User , 14 years ago
I first became acquainted with John McCain upon reading a December 1982 Reader's Digest article entitled "Joyful and Triumphant" which of course is from the Christmas Hymn "O, Come all ye Faithful". He wrote about a Christmas service which he led, (Bud Day nominated him chaplain for the evening), for the two dozen American prisoners gathered together for a Christmas eve service in Hanoi, Vietnam. I have the entire article somewhere in my apartment which I've saved all these years. I've followed his career all these years, and he's never disappointed me. Would have voted for him in 2000 even when I considered myself a diehard Democrat. I'm an Independent now. This book is a great one to start with if you know absolutely nothing about Senator John McCain. The author is a former marine who did a tour in Vietnam in 1966-1967. He first wrote this book in the 90's, some years before Senator McCain started his first bid for the Presidency. I had many laughs reading this book, particularly when I found out what "IHTFP", the title of one of his chapters, stood for. Students at the Naval Academy used this anacronym when referring to their school . It stands for "I hate the f'in place!" I also got a laugh reading about a slip of the tongue McCain had when campaigning for his Arizona Senate seat early in his senate career. He referred to an Arizona retirement community as "Seizure World" instead of Leisure World. He is probably THE ONLY person in U.S. history to get away with such a gaffe and still win an election! I will continue to hunt for that Reader's Digest article; I have it on hand somewhere-don't throw stuff like that away. For years I had it in my bible along with other articles, poems, mementos. One year, on reformation day or all Saint's day, November 1, I removed them from my bible in what I thought at the time was a symbolic gesture! That article can also be found "The best of Christmas in my heart" by Joe Wheeler which came out a year ago. I also haven't trashed an email I got a year or so ago from another Naval Academy grad, Roger Staubach, also a McCain 2008 supporter. (My mother was the HUGEST Dallas Cowboys fan, Tom Landry fan, Roger Staubach fan, for decades, when they were losing, long before they'd even come close to winning a super bowl)! He may be Arizona's Senator, but I claim him too. I think this country will be sorry that he didn't get elected to the most powerful country in the world. That's what I predict. Mark my words.

Published by Thriftbooks.com User , 22 years ago
John McCain may be a character that is currently considered either in love or hate, but either of those opinions could be well challenged by the facts presented in this well-written account of the Senator's life. From his boyhood in the shadow of his father and grandfather (both US admirals themselves) to his escapades at the Academy and then into his heroic tenure in Vietnam, this book does a superb job of detailing the life and ideologies of this provacative man that one ay never understand by simply watching CNN or CNBC. Even his rise into politics is detailed in an unbiased manner and I firmly believe that this book should be essential reading for anyone with an interest in American politics or recent political and military history.

A solid introduction to an intriguing man

Published by Thriftbooks.com User , 23 years ago
Love him or hate him, John McCain is one of the most interesting and provocative public figures in America today. This book, by Robert Timberg, does a nice job of introducing McCain to the voting public, much of which knows little about this presidential candidate. Timberg's book is short - you can read it in a day - but it is surprisingly deep and well-researched. Timberg's judgement of McCain is positive, although not gushy. You will come away from this book not only with a better understanding of Senator McCain but a better appreciation of his positive impact on our country.

Published by Thriftbooks.com User , 23 years ago
An excellent objective account of John McCain. I was looking for as unbiased book on this presidential hopeful as possible. I found it in this book. Although somewhat biased myself, I appreciated the candid remarks about his renegade attitude and well publicized short temper. I firmly believe that this book will help one form his/her own opinion of McCain rather than attempt to lead you in one direction or another. If nothing else, after reading this book, you will surely walk away with an appreciation if not admiration for what John McCain went through as a 5 1/2 year POW in Viet Nam.

A riveting book about a true American hero

Published by Thriftbooks.com User , 23 years ago
It is quite refreshing to read a biography of a political figure who hasn't been involved in a sex scandal and is truly an American hero. In this day and age we apply this tag to public figures from rap stars to baseball players, when none have accomplished or endured anything along the lines of John McCain. Timberg chronicles the senator's life from his roudy days in high school to his five and a half year imprisonment in a Vietnamese POW camp, all the way to his election as a Congressman, senator, and presidential candidacy. Facing numerous challenges, the largest of those being the years of torture and abuse at the hands of his captors, McCain manages to overcome the spectre of both his father and grandfather being four star admirals and carves out his own niche while maintaning individuality, integrity, and a deep sense of personal responsibility. Timberg graphically describes the events which transpired during his years in Vietnam, the horrendous conditions, and McCain's steadfast desire to not be given any preferrential treatment. The book is also filled with hilarious anecdotes along with many observations from Timberg himself regarding McCain's involvement in Vietnam, the Naval Academy, and involvement in the Keating Five scandal. A somewhat biased book, but a great book nonetheless on a truly remarkable American figure who could very well end up as our next president.
Trustpilot
Copyright © 2023 Thriftbooks.com Terms of Use | Privacy Policy | Do Not Sell My Personal Information | Cookie Preferences | Accessibility Statement
ThriftBooks® and the ThriftBooks® logo are registered trademarks of Thrift Books Global, LLC