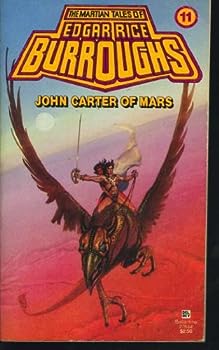 John Carter of Mars (The Martian Tales No. 11)

Published by Thriftbooks.com User , 16 years ago
Alot of reviews are saying the Edgar Rice Burroughs did not actually write "John Carter and the Giant of Mars". The truth is that he did. This is what happened and what causes confusion: a childrens publisher wanted a short version of a Edgar Rice Burroughs' novel. Mr. Burroughs was concerned that he could not keep it short enough for the publisher so he asked his son to help craft a shorter story. At the same time, Amazing Stories asked Edgar Rice Burroughs for another Mars novel. A full lenght one to serialize. Edgar took the short story and stretched it to a full novel. This is confirmed by several sources and by Edgar Rice Burroughs estate. It explains why some of the novel strays from the rest of the series. So, yes his son was involved, but it is wrong to say that Edgar Rice Burroughs did not write it. He did. Especially the novel version. Anyway, all of the Mars books are exciting and I recomend all the books in the series.

Published by Thriftbooks.com User , 23 years ago
With her slim dagger she fought at her husband's back when they were outnumbered. No victim women in these books. This was one of the few adventure-sci fi series with interesting worthwhile women.

Thirty years ago this book opened a new world to me.

Published by Thriftbooks.com User , 23 years ago
"A Princess of Mars" began for me a journey which will last a lifetime. I lost myself as a youth and young adult, in first, the Martian series, then enumerable other Edgar Rice Borrough's tales. I have now begun the journey again with my 9 and 11 year old sons. The stories endure the test of time, impart lessons in life, and entertain in an unparalled fashion. Oh yes, Borrough's unique usage of descriptive vocabulary prompted my early fascination with the English language. Borrough's novels, and in particular the Martian series, has had a profound inpact on my life, and that of many of my family members. It is more entertainment than I had a right to expect, and I am thankful for the experience. Please read my favorite series chronicling the adventures of John Carter of Barsoom. You will not regret it.

Published by Thriftbooks.com User , 23 years ago
John Carter, a gentleman from Virginia, late of the War between the States, finds himself adrift with no war to fight and goldpanning in the West. Beset by Indians, he turns to Mars, the god of War, the red planet and cries out for help. He awakes on the red planet, and his adventures there with the green men, Woola, and Dejah Thoris are that of which mere mortals may only dream. Burroughs concocts a Saturday morning movie serial that still has real heart - John Carter is noble without being foppish and Dejah Thoris is regal and beautiful and worthy of his love. These are not books for people who have forgotten the lure of reading under the sheets after "lights out" have been called, nor are they books for the serious self-help addict. But for those of us that still enjoy curling up with a bona-fide page turner, John Carter of Mars is it....
Copyright © 2020 Thriftbooks.com Terms of Use | Privacy Policy | Do Not Sell My Personal Information | Accessibility Statement
ThriftBooks® and the ThriftBooks® logo are registered trademarks of Thrift Books Global, LLC