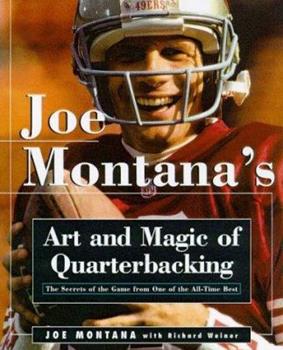 Joe Montana's Art and Magic of Quarterbacking: The Secrets of the Game from One of the All-Time Best

by Joe Montana and Richard Weiner

Critically acclaimed in the successful hardcover edition, this is the first book to reveal an NFL quarterback's secrets for reading defenses, calling audibles, and becoming a team leader. Written for aspiring players as well as fans and all students of the game, the book combines instruction with inspiration and is chock-full of anecdotes and highlights from legary quarterback Joe Montana's storied career. Lavishly illustrated with action full-color...

learning from the best...

Published by Thriftbooks.com User , 19 years ago
this book is awsome. Joe Montana, probably one of the greatest QBs ever shares his tips and secrets with the readers. Montana discusses everything from certain exercises to do, how to gain more accuracy, what's kinds of defenses there are, how you should grip the football, the different passing patters, and how he used to prepare during the week for an up and coming game. he goes through his mental preparation and what he's thinking in the first quarter, the second quarter, the adjustments at the half, the third, and then the 4th quarter. Montana also preaches unity and team. he never places himself above his teamates and always credits the people around him for his success. his offensive line, his running backs, coaches, wide recievers, and his parents.good book for any kid interested in becoming a QB or for anyone who just needs a little inspiration.

Montana is the maestro

Published by Thriftbooks.com User , 23 years ago
Joe Montana gives fans of all ages the complete package of quarterbacking. He breaks down every little detail associated with the position. This should be the right hand textbook for anyone wanting to play QB. A beautiful photo gallery is depicted in each chapter.

Joe knows of what he writes!

Published by Thriftbooks.com User , 24 years ago
I'm admittedly certifiably crazy about football, the San Fransisco 49ers and Joe Montana. But even discounting those facts, this is one of THE best books ever written on football. Joe really KNOWS football and he and his co-writer really allow you to get INTO his head from a position underneath the center and indeed, from positions all over the field. The diagrams and Joe's explanations of all the intricacies of the game are more than worth the cost of the book, even for veteran watchers of the game. Joe is not only knowledgeable, but gracious and humorous! Having been lucky enough to talk with Joe more than once I can guarantee the truth of those three adjectives to describe him. This book was SO good I sent a copy to my friends in Germany who are also 49er fans (one really LIKES diagrams and one really LIKES Jerry Rice!) I sincerely hope Joe writes MORE books in future. Merfuff

A great purchase for football fans at any level.

Published by Thriftbooks.com User , 24 years ago
As a football fan, and more specifically a Joe Montana fan, this book has it all. Not only do I understand more about the game, I also have a deeper admiration for those who suit up at the quarterback position. Joe puts you on the sideline, in the huddle, and at the line of scrimmage. He's both informative and inspirational, and leaves little doubt as to why he's considered the greatest quarterback of all time. You'll learn a lot of instructional advice on how to play quarterback from Joe, but the book also puts you inside Joe's head during his many magic moments.Gordon Shumway (GMVN@aol.com) New Jersey
Copyright © 2022 Thriftbooks.com Terms of Use | Privacy Policy | Do Not Sell My Personal Information | Accessibility Statement
ThriftBooks® and the ThriftBooks® logo are registered trademarks of Thrift Books Global, LLC