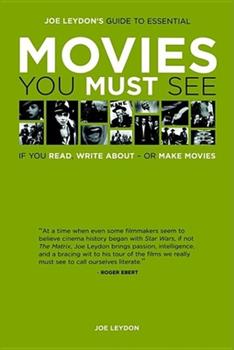 Joe Leydon's Guide to Essential Movies You Must See: If You Read, Write About, or Make Movies

Veteran film critic Joe Leydon analyzes 100 movies that have defined genres, influenced filmmakers--and serve as standards by which other films are measured.

Published by Thriftbooks.com User , 15 years ago
This is one of the most pleasurable books about film around. Author Joe Leydon obviously knows his stuff but he's no pompous pedant. Instead, reading his prose feels as though you are having a conversation with a good friend -- and a witty, intelligent, interesting friend at that. The goal of the book is not to tell us which are the greatest movies ever made, but to point out films to see that are important because of their subsequent influence on other films and on our culture itself. Luckily, this is done with just the right balance of humorous anecdotes and serious, insightful commentary. I find myself reading a section in the book, renting a film or a few that were mentioned in that section, and then rereading the book after watching the movies. Invariably, I end up appreciating and enjoying the flims a lot more than I would have if I had just watched them cold. This is one book that will have a home on my shelves for a long time to come.

Published by Thriftbooks.com User , 16 years ago
I imagine one of the more difficult things for someone who writes about movies, is to write about the movies everyone's already written about, and not say the same things everyone else has said. I mean, what more needs to be said about "Citizen Kane" or "Rashomon"? Then comes along Mr. Leydon, with these masterful, concise, pithy reappraisals of movies that everyone simply needs to see. The key here is perspective. He places each movie within a broader canvas; you see where it fits in cinematic history. You see where it SHOULD fit in your own filmgoing history. That's a pretty neat feat. I've been sitting reading a handful of these essays over lunch, over several days. They're perfect for those short periods of time, longer than a bathroom break, shorter than a rainy afternoon, when you'd like to read something better than a People magazine article. Having read dozens, if not hundreds, of film books, I was constantly surprised at his fresh approach, and his scholarly but engaging tone. This book on essential movies is an essential book itself. A thoroughly enjoyable experience...he needs to write another one!

You must remember this

Published by Thriftbooks.com User , 17 years ago
Having read - and occasionally respectfully cursed - Leydon's reviews, interviews and film articles for years in Variety and newspapers, and having watched (and competed against) him on interviews at countless film junkets, I knew his interest in movies was not just professional but a passion. He loves movies, which is why these essays approach the films as a glass half (or more) full, not half empty. Clearly, they will be appreciated more by those who view film as a joy, not as intellectual research. Nonetheless, these are not glorifying comments on his favorite films, but thoughtful, plain-speaking dissections of how each film, good or bad, plays into the evolution of the way we, today, view and make film. Despite the cumbersome title, and each film's "Lesson for filmmakers" section, this book will give most satisfaction to the devoted movie fan. It offers us unpretentious thoughts to mull and makes lots of references to other films. Oh, and has many bits of gossipy knowledge, the kind of fun stuff that Robert Osborne dishes out before a TCM screening. And since most of the films are good (or famously bad) and well known, it's easy to go through this like popcorn, always meaning to stop, but then taking just one more.

A great book for movie buffs

Published by Thriftbooks.com User , 17 years ago
I used to enjoy reading Joe Leydon's Cinessentials column in Stereophile Guide to Home Theatre, so I was glad to see he's expanded on a few of those pieces for chapters in this book. But I'm even happier to find so much more of the book consists of new essays about classic (and non-classic) movies. Unlike some of the more esoteric posters here - or are they merely poseurs? - I'm very impressed by Leydon's populist approach to spreading the good word about must-see movies. Besides, anyone who has the eyes to see and the heart to understand can tell from the opening chapter that he's aiming his book at eager-to-learn students and eager-to-read fans, not dry academics and oh-so-serious cineastes. I think what Leydon does here is very similar to what Malcolm Gladwell does in "The Tipping Point" - he takes complicated concepts and arcane facts and makes them accessible and entertaining with plain language and breezy style, without trying to dumb things down for his readers. Some of his best pieces here (like the chapters on "42nd Street," "Citizen Kane" and "Rio Bravo") convey great enthusiasm as well as a keen grasp of film history. I bet a lot of college students (and a lot of people out in the real world as well) would really appreciate this book as an introduction to cinema. And I bet many movie buffs who already know a lot about movies will still enjoy reading a movie guide that isn't bogged down with pretentiousness or didacticism.

Published by Thriftbooks.com User , 17 years ago
This is a very significant contribution to the world of film appreciation. As important as the AFI 100 Best Films list, Joe Leydon's experienced and professional insight is highly recomended for any film-buffs library. He provides in-depth and unique insight into some of the greatest films of our time. He is more than qualified, with many long years of experience writing for Variety and some of the top newspapers and film publications in the world. High recommended for anyone with more than a casual interest in great films. His approach and compilation is unique and thought-provoking. A must read for all film buffs.
Trustpilot
Copyright © 2022 Thriftbooks.com Terms of Use | Privacy Policy | Do Not Sell My Personal Information | Accessibility Statement
ThriftBooks® and the ThriftBooks® logo are registered trademarks of Thrift Books Global, LLC