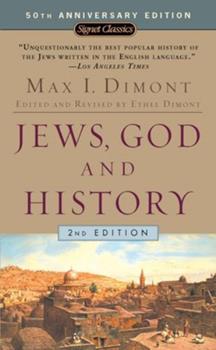 From ancient Palestine through Europe and Asia, to America and modern Israel, Max I. Dimont shows how the saga of the Jews is interwoven with the story of virtually every nation on earth.

Published by Thriftbooks.com User , 15 years ago
This popular history of the Jewish people succeeds in bringing the four thousand year saga alive for the general reader. The author observes that even though the furniture of the West may be Greek, the house of Western civilization is Jewish. One of the questions examined in this book is: How did the Jewish people survive the disappearance of every civilization in which they lived? The following six eras are discussed in the Preface: the Pagan World, Greco-Roman civilization, Diaspora, Islam, European Middle Ages and the Modern Age. Dimont accepts the psychoanalytic, philosophical and existentialist interpretation of history that holds that ideas motivate mankind and shape history. Part One: The Portable God, explores the age of paganism, the origin of the Hebrews and of monotheism and the ancient kingdoms of Israel and Judah, until the coming of the Greeks and the clash of Greek and Hebrew culture. In Part Two: Age Of The Apikorsim, he looks at the survival of Jewish culture and religion under the Greeks, the Roman take-over of the land, the destruction of Jerusalem and the various Jewish revolts until the final banishment from the Holy Land. Part 3: Moses, Christ and Caesar investigates the birth of Christianity as a Jewish sect, how the religions were separated during the aforementioned wars and revolts and the spread and ultimate triumph of Christianity in Europe. The next section, Invisible World Of The Talmud, explains how Judaism and Jewish identity were preserved in the diaspora by means of Talmudic learning. In Part 5: Mohammed, Allah and Jehovah, the author covers the rise of Islam and the Arab expansion, the golden era of Jewish scholarship and the end of that period with the Mongol invasion of the Middle East and the Christian reconquest of Spain, whilst the following, The Prince And The Yellow Star, considers the Middle Ages, Crusades, Renaissance and Reformation. It also examines the role of the Jewish people in the feudal age and the origin of Kabalah. Part 7: On The Horns Of Modern Isms, chronicles the emancipation from the ghetto to the enlightenment when Jews started occupying important positions and became intellectual leaders in Europe. This section looks at Western Europe, Eastern Europe, the United States, Nazism and finally, Zionism and the birth of the State of Israel. In the last part: Cultural Mosaic, Dimont attempts an historical explanation of the incredible survival of this miracle nation. In his view, the first 2000 years represent that third of the Torah and Talmud which concerns priesthood and sacrifice that preserved the Hebrews from paganism. The second 2000 years had to do with that third of the Torah and Talmud that preserved ethnic identity through ritual while spreading Biblical ideas of humanism. He speculates that the last one third now remains, that part that deals with universal concepts of justice, morality and ethics. There is an extensive bibliography divided into various sections and an index. A

Incredible summary of an incredible people

Published by Thriftbooks.com User , 18 years ago
A book that spans Abraham to Maimonides to Disraeli can't get every detail in, but I still found the book very informative. I found Dimont's interpretation of events enlightening -- for example, in the Middle Ages the ghettoization and ostracization of Jews, in a way, helped the Jews, because they were free from the ludicrous system of Feudalism. Could we consider the Jews the originators of the Free Market system (which is a good thing)? Dimont hints at this. I also didn't know that the Church was in many ways the *protector* of the Jews (Gregory the Great forbade the forced conversion of Jews), and that it was lay Christians who incited and joined the Anti-Semitic mobs. This makes "sense" in a social psychological way(not to give credence to Jew hatred). You have a bunch of serfs, illiterate, ignorant of their own religion, ignorant of the Tanach/Old Testament (Catholic Church liturgy really builds entirely from the NT), ostensibly owned by their lords, and then you have a bunch of educated, "free" Jews who were different religously from the oppressed Christians. Jealousy, envy, perception of a disruption in the "natural" order, thus Anti-Semitism. The Nazis would pick up on this later, quite literally emphasizing the "natural order", except the Nazis, as Dimont shows, aren't Christian but anti-Christian as well as anti-Jew. Their hatred of Jews had nothing to do w/ "deicide", rather motive that can only be described as Darwinian pagan "Blood and Soil". The Nazis had enough Zyklon-B gas to kill 20 million more, yet only 3 million Jews left in Europe after the evils of the Final Solution. The Nazis were going to go after everyone. I also liked the tidbits Dimont throws in: Germans during WWII had a higher suicide rate than Jews in the concentration camps. Amazing! What spirit pulses through the seed of Abraham! This book reaffirmed my faith in the Creator. This is an excellent book for Christians to read, so that all Christians may understand and appreciate the history of our Jewish brethren.

Published by Thriftbooks.com User , 19 years ago
I had not much luck with finding a really good history of Judaism until I stumbled across this book and bought it on a whim. What I got was what I really wanted: a well-written history of the Jews from ancient times to today.Two things make this book great. First, Dimont is a good writer, both insightful and entertaining, with occasional flashes of ironic humor. Second, Dimont puts the history of the Jews in the larger context of World History and keeps from a narrower Jewish perspective.On the one hand, Dimont does not hide his general admiration for the Jews, both for their endurance and their contributions to society that are far out of proportion to their percentage of the populace. On the other hand, for those who believe that Jews have suffered nothing but persecution for thousands of years, Dimont presents a different viewpoint which shows Jews often prospering. No one will find Dimont fully objective in his history, but they should find that he presents an overall balanced work. Written with both Jewish and non-Jewish audiences in mind, Dimont has put together a wonderful book that is good for both those interested in Jewish history or those interested in Western history in general.

Published by Thriftbooks.com User , 20 years ago
This book was recommended to my by an internet friend. It is far outside of my usual area of reading. I did not think that I would understand the book, much less enjoy the read. Just how interesting would Jewish history be to a Christian? I was very wrong in my assumptions. This book turned out to be a real page- turner. I couldn't put it down. When I was in high school, many years ago, I could never figure out what made the Jewish kids so smart. They seemed to be the grade leaders in every school in the city. This great book answered that question and many others that I have always had about the Jewish people and religion. In my opinion, every adult, Muslim, Christian, Jew, or whatever religion, should read this book. The way you look at the world will be forever changed!

Published by Thriftbooks.com User , 23 years ago
This book truly reviews the glorious history of the Jews. I couldn't put it down. The facts and the fiction that have been discussed and written about over the centuries were touched on with great passion and research. This book makes me proud to be a part of the Jewish people.
Trustpilot
Copyright © 2022 Thriftbooks.com Terms of Use | Privacy Policy | Do Not Sell or Share My Personal Information | Accessibility Statement
ThriftBooks® and the ThriftBooks® logo are registered trademarks of Thrift Books Global, LLC