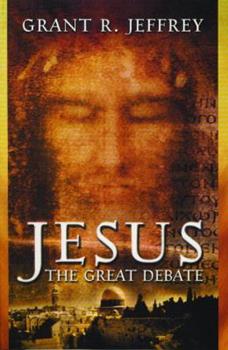 JESUS- The Great Debate The Question is... Who do you say that I am? An insightful new release addressing the identity of Jesus from a knowledgeable, well researched perspective. "Who do you say that I am?" It's a question that has stirred great debate concerning the identity of Jesus in universities, churches, and most of all, in the hearts of millions. JESUS The Great Debate explored the criticism of the skeptics, such as the Jesus Seminar, a group...

Published by Thriftbooks.com User , 16 years ago
... The focus should be on Him and our furtherance of His name here on earth before we run out of time. Besides, clearly in the Gospel, it says there was seen (observed) one piece neatly folded, lying in a corner, that was used to cover His head; the rest seen lying in a heap. Two pieces. Being so vociferously opinionated one way or another, gives one the idea we are hanging our hopes on a tangible thing. This not going to win hearts for Christ. What would fans of the shroud have done if that Italian fireman hadn't whacked into the silver and glass case, and made off with it during the fire? The shroud should be a non-item, same with the ark, same with the ark of the covenant in Ethiopia. They tell you that themselves, when you go there to pester them into showing you. The effect He had on first century people and events, our holy Bible and finally our faith is what matters. These three things are crucial. Nanette Ward <

One of the best Christian apologetics I have read!

Published by Thriftbooks.com User , 21 years ago
First off, I have to refute an earlier review from CL8 on 11-11-2000. If I understood his review, he gave this book a poor rating because it was not consistent with the Jesus Seminar. I say, of course it isn't consistent with the Jesus Seminar. The Jesus Seminar is a huge joke! Basically, the "theologians" of the Jesus Seminar vote on whether or not Jesus actually did what the Gospels state He did. They VOTE on it! When they vote, they have 4 different selections: definitely, maybe, not likely, and not at all. And, the majority rules. So, if 5 people vote that Jesus definitely did something, and 6 other people vote that Jesus didn't do it at all, then, according to the rules of the Seminar, Jesus didn't do it at all. What a joke!Forgive me, I digress.... Back to the book.... This book covers everything from the writing and dating of the gospels, to the Dead Sea scrolls, to the Shroud of Turin. I find the evidence given by Jeffrey to be very compelling. I have been truly rewarded by reading this book. I still find myself somewhat skeptical about the Shroud of Turin, but Jeffrey does paint a very interesting picture of the shroud. Jeffrey does remain Biblical in his reasoning, so if he doesn't agree with some other scholars, that might be why. I have loaned out my copy of this book several times, and each time my friends found it insightful and a rewarding read. I would recommend this book to anyone.

Published by Thriftbooks.com User , 22 years ago
Jeffrey does a good job going over the historical and archaeological evidence in order to prove Jesus existed. I found the evidence presented in the Dead Sea Scrolls, ancient Jewish sources, and Christian tombs, to be both enlightening and accurate. Once again, Grant R. Jeffrey gives Christians a book that can only strengthen their faith.

Great Book, well worth its price!

Published by Thriftbooks.com User , 22 years ago
This book read like a novel. I found the evidence presented in the book both valid and interesting. Jeffrey goes over historical, archaeological, and logical arguments for and against the life of Jesus as presented in the Gospels and asks you to make an educated decision based on the facts.
Trustpilot
Copyright © 2022 Thriftbooks.com Terms of Use | Privacy Policy | Do Not Sell or Share My Personal Information | Accessibility Statement
ThriftBooks® and the ThriftBooks® logo are registered trademarks of Thrift Books Global, LLC