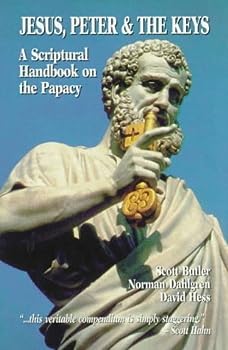 Jesus, Peter & the Keys: A Scriptural Handbook on the Papacy

This voluminous study examines the question of the Papacy in theological, biblical, and historical context, attempting to dispel doubts about the traditional Roman Catholic position by an impessive... This description may be from another edition of this product.

Published by Thriftbooks.com User , 21 years ago
This book is well worth the read if you are looking for a cogent explanation on the issue of the Petrine Office, the Papacy.Butler, Dahlgren & Hess divide their book into two halves. The first half is a comprehensive look at the scriptural support for the papacy and doctrines that devolve from it (i.e., papal infallibility, the role of the Church).The second half of the book is a sampling of many Early Church Fathers and how they perceived the Petrine Office. In short, it is a quite compelling presentation in that the view of the Early Church Fathers, as presented, is the same view the Church promotes today.This is the best book that I have found on the issue of the Papacy. If anyone is struggling with the issue of authority in the Church, this is the first book I would recommend not just because of its content but also because it is written in a very easy style. You won't be disappointed in this book. Buy it now.

Complete analysis of the Petrine office in Q & A format

Published by Thriftbooks.com User , 21 years ago
This book is packed tight with both Scriptural and historical grounds for the Roman Catholic doctrine of the Papacy. It answers all questions and, in this Roman Catholic's opinion, settles all doubts. It exhaustively covers the rock (kepha), the keys, Peter's authority, Church structure and authority, Apostolic succession, and infallibility.The authors have put this book into question/answer format; they ask the questions and give the answers. The answers are based on the Scriptures, and the authors provide the relevant verses. For easy reference, all of the questions (numbered) are indexed in the back of the book, with page reference.\I compare this book to "All Generations Shall Call Me Blessed," which is an exhaustive work on the Marian doctrines. For apologetics or serious study, I highly recommended that book, and I highly recommend this one!

All beef with no bull!

Published by Thriftbooks.com User , 23 years ago
I was first attracted to this book because of the title--simple and direct, no flashy titles to make up for lack of content. That was about two years ago. Since, I have read other materials related to the topic as well as Protestant comments about the book. I just read it again and am thankful for the opportunity.( I just had to order another, I gave my first away) The authors--Deacon David Hess, Norman Dahlgren and Scott Butler have done a fine job in presenting the historical truth regarding the Papacy. I have met two of the authors and look forward to more of their work. I recommend reading this book twice, and read some works that try to refute this one between readings. You will soon find how sound this book really is, it is ALL meat.

Probably the best book in print defending the papacy

Published by Thriftbooks.com User , 23 years ago
Well...lightweight pseudo-scholars like James White and Robert Zins will have their hands full for years with this one. This book is one of the best Catholic apologetics around right now. It was reviewed by three hundred and fifty Protestant professors for four years before it was published. Since its publication, forty-two Protestant seminary professors from various traditions have converted to the Catholic faith. I predict that this trend will continue. This easy to follow guide is a must read for Catholics and Protestants; for Catholics to strengthen their faith and to give them ammunition against Protestants, and for Protestants to educate them on what scripture and early Christians really say about the papacy.
Trustpilot
Copyright © 2022 Thriftbooks.com Terms of Use | Privacy Policy | Do Not Sell My Personal Information | Accessibility Statement
ThriftBooks® and the ThriftBooks® logo are registered trademarks of Thrift Books Global, LLC