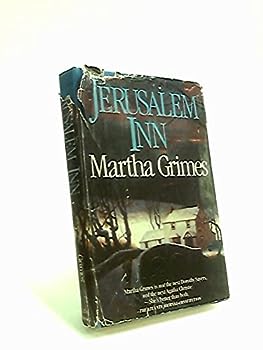 (Book #5 in the Richard Jury Series)

Bad tidings come to Scotland Yard's Richard Jury and his sidekick, Melrose Plant, when clues from two corpses lead them to a remote country inn where holiday cheer turns to fear.

Published by Thriftbooks.com User , 13 years ago
I love these mystery books. Richard Jury keeps you guessing and intrigued and wondering who did it.

Published by Thriftbooks.com User , 16 years ago
I have read the first nine books in the Richard jury/Melrose Plant series. I have enjoyed each very much. The Jerusalem Inn took me back to The Man with a Load of Mischief in that the snow covered landscapes are the perfect setting for the plot, twists, and curves with which Grimes fills each novel. This is a series to be savored.

Near The Top Of Her Form

Published by Thriftbooks.com User , 17 years ago
I've read over a dozen of the Richard Jury books by Martha Grimes, but I only read Jerusalem Inn recently. I'd put it near the top of the list. I think The Man With A Load Of Mischief is a bit better, and The Old Silent has a much more complicated plot. Martha Grimes seems to balance the recurring elements of the Jury series much better in this book than in some others. In Jerusalem Inn, we start off with Richard Jury's angst and self-doubt, a recurring theme in the series, but it's not overly done. The mystery of the dead woman is well crafted, and the thread which connects her to the other protagonists is drawn out skillfully over the course of the book. The Long Piddleton characters - Melrose Plant, his aunt, Vivian, and butler Ruthven - add just the right humorous touch, again in better proportion to this book than in some others. There is a pub named the Jerusalem Inn, of course, peopled by a separate group of characters. And, in common with most of the Grimes books, there is an upstart little girl, although again this is more in balance with the rest of the plot than elsewhere. Having read almost all of this series, I'd suggest reading this one second, after The Man With A Load Of Mischief. If you enjoy English mysteries in the classic style, this will not disappoint.

My first Grimes, and one of my favorites still

Published by Thriftbooks.com User , 20 years ago
This was my intro to the Richard Jury series and I liked it so much, I've read most of them in the space of 6 months (while reading plenty of other books too!) I found this particular mystery to be very well thought-out. Interesting characters, a solid plot, great dialog. It's not a bad place to start, if you don't want to start at the beginning.
Copyright © 2020 Thriftbooks.com Terms of Use | Privacy Policy | Do Not Sell My Personal Information | Accessibility Statement
ThriftBooks® and the ThriftBooks® logo are registered trademarks of Thrift Books Global, LLC