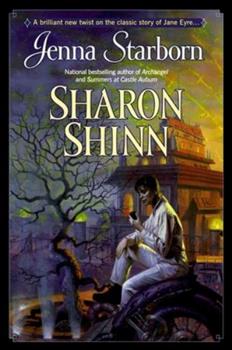 Jenna Starborn was created out of frozen embryonic tissue, a child unloved and unwanted. Yet she has grown up with a singularly sharp mind -- and a heart that warms to those she sees as less fortunate than herself. This novel takes us into Jenna Starborn's life, to a planet called Fieldstar, and to a property called Thorrastone -- whose enigmatic lord will test the strength of that tender and compassionate heart.

Published by Thriftbooks.com User , 16 years ago
Not many authors would have been able to re-tell the story of Jane Eyre and still keep the emotional depth and interest in the characters, but Sharon Shinn does an admirable job. In my opinion, Jane Eyre is a boring plot anyway and the depth of Jane's feelings is the only thing that makes it compelling reading, not whether on not what's-his-name will fall in love with her. I like this version much better because it is written in modern language and so much easier to read than the original. Its modern setting also makes it easier to swallow my major objection to the story: that an abused, downtrodden child would be so outspoken and self-righteous.

Published by Thriftbooks.com User , 17 years ago
Jenna Starborn is heavily influenced by the sisters Brontë. As I have enjoyed their books, I loved the way this book stiched together the plot points of Jane Eyre and Wuthering Heights and yet created a fully realized futuristic world.

Published by Thriftbooks.com User , 18 years ago
this book is an absolute treat. If you love Jane Eyre -so do I- you will feel the fun in foreseeing the events in the plot but wondering how the author will adapt them to this sf setting. If you love science fiction you will feel interested in the multilayered society that the author decpicts, where the caste one person is born in is totally decissive of this person's fate. I don't feel that any literary work is untouchable or sacred, as long as the new versions respect the themes that the original author wanted to convey. This version unquestionably does. On the other hand, I think the original, beloved Jane Eyre is also a wonderful version of the ancient tale of Beauty and the Beast. This is, of course, not the only remake that we know of Jane Eyre; I suppose everybody remembers Rebecca so...what's all the fuss about? Jane Eyre is such a good story, it conveys its thems so well, that it is immortal and can be adapted to any period of time ...including the far future of a sf novel. And only an author who loved this story and knew it in depth could attempt to do what Sharon Shinn has done here. Thank you, Ms.Shinn, for proving to me in this nice way that Jane Eyre will never die and that its message will always be good!

Put your feet up, gals, for a fun summer read!

Published by Thriftbooks.com User , 19 years ago
While Jenna Starborn may not have the innovative underpinnings of Archangel, it has its own charms. I would not call the book derivative - I see it, rather, as the ultimate "fan fic," a lovingly crafted and delightful salute to Bronte by an accomplished writer. I was particularly impressed with the handling of language - Shinn makes it look easy. Let me tell you, the duplication of archaic syntactic rhythms is NOT easy - as a casual reading of most sefl-styled "epic" SF/Fantasy tales should demonstrate. Shinn's language rings true and supports her characterization of Jenna, a woman I found downright inspiring. Also interesting to me was the mix of an older, more substantial code of moral honor with what is too often a setting for our increasingly honorless relativist view of morality. It was refreshing to read about lovers who take love and committment seriously and who stay true to a belief system of substance. In the end, however, my recommendation of the book is purely personal - it was fun, it was romantic, it was skillfully written - it was a delightful ride. Shinn knows her business and does it well. And I, for one, needed a little bit of spring...

Published by Thriftbooks.com User , 19 years ago
In the far distant future, Earth has advanced so far technologically that she has colonized many planets in quite a few galaxies. On the planet of Baldos, a woman who thought she was barren contracted to have a child that was gestated in a gene tank. When Jenna Starborn was born, the woman now pregnant with her son, treated Jenna cruelly, refusing to adopt her. Eventually, the authorities took her out of the home and ensconced her on Lora where she went to school at Lora Tech and learned to be a nuclear technician. After she graduates, she applies and obtains a job as a generator tech on the planet Fieldstar. Her employer Everett Ravenback of the domed estate of Thornafone Park falls in love with Jenna and asks her to marry him, but on her wedding day she learns a truth about him that causes her to flee across the galaxies in fear. Sharon Shinn, like Anne McCaffrey and Catherine Asaro redefines the boundaries of the science fiction romance genre and in doing so creates a memorable, beautiful work. The heroine, a woman looked down by the elite of the galaxy, is a strong-minded and moral person who will not break her own ethical code even if it means giving up the man she loves. Jenna Starborn, in the decades to come, will be a cult classic.Harriet Klausner
Copyright © 2020 Thriftbooks.com Terms of Use | Privacy Policy | Do Not Sell My Personal Information | Accessibility Statement
ThriftBooks® and the ThriftBooks® logo are registered trademarks of Thrift Books Global, LLC