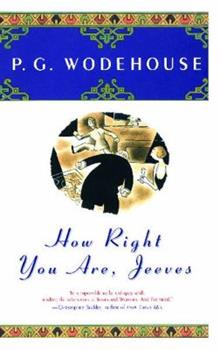 How Right You Are, Jeeves

A Bertie and Jeeves classic, featuring a cow-creamer, the redheaded Miss Wickham, and the formidable schoolmaster Aubrey Upjohn. Jeeves is infallible. Jeeves is indispensable. Unfortunately, in How Right You Are, Jeeves, he is also in absentia. In this wonderful slice of Woosterian mayhem, Bertie has sent that prince among gentlemen's gentlemen off on his annual vacation. Soon, drowning dachshunds, broken engagements, and inextricable complications...

Published by Thriftbooks.com User , 13 years ago
I first began reading Wodehouse 24 years ago (1985) and found the Jeeves stories most entertaining. Being a lover of the English language I was always fascinated with Jeeves' wonderful command of the language. Ironically, in his stoical, unfunny and businesslike demeanour he turns to be the exact opposite. That, in my opinion is what makes the stories so wonderfully funny.

Excellent - but issued under new title

Published by Thriftbooks.com User , 14 years ago
Wodehouse in usual delightful form, zany situations and characters, some familiar to fans already. However, please note this title is a re-issue and was formerly published as How Right You Are, Jeeves, a book I already had without being aware. One can never have too much Wodehouse!

Published by Thriftbooks.com User , 15 years ago
Although a prolific writer, PG Wodehouse was most remembered for his characters Betram Wooster (or just Bertie), and his unflappable butler Jeeves (who seems to be a constant fountain of wisdom, and is usually extricating Bertie from the latest mess he's found himself in. The plot is somewhat complicated to explain. When Jeeves goes on vacation, Bertie is invited to his aunt's country estate. However, he is not the only guest. One guest is pretending to be the butler, while he is actually an eminent psychiatrist who is spying incognito on another guest, Mr. Willie Cream (I'm guessing the innuendo was intentional!). Mr. Cream is paying court to another guest, whom Bertie's aunt does not wish to see married to. I could go on, but I've probably confused you enough. It's easier just to read it, as it's both brilliant and funny. Bertie finds himself being called upon to doing all manner of things, such as being a spy, trying to steal back stolen items, getting involved in a plot to win someone over by pushing them into a lake, etc, etc. Bertie is a rather clumsy fellow, who claims to have nerves of steel, yet by dint of always helping out a friend often finds himself in impossible (yet very funny for us) situations. The copy I had was from my local library, written in 1962, I believe, but I doubt much has changed. The style of Wodehouse is unusual at first, often abbreviating common phrases or expressions, not to mention throwing in occasional spatterings of latin, but you get used to the abbreviations, and sometimes work out the latin. In short, it's a very unique style. Combine that with the ability to write funny, yet very convoluted plots and scenes, dialogue that will have you chuckling right along with it, and two main characters who are memorable and very complimentary, and you end up with a book that is very difficult to put down, and well worth the time to read. I highly recommend this book.

Another delight by Wodehouse

Published by Thriftbooks.com User , 16 years ago
Poor Bertie Wooster. He's an amiable enough fellow and while not too bright, is smart enough to avoid creating trouble; unfortunately, trouble always comes to him, typically through friends and relatives. Fortunately, he has the ultimate butler, Jeeves, who is able to extricate Wooster from his problems and resolve all the messes. In Jeeves in the Offing, Bertie is yet again in the soup and it will require Jeeves to ladle him out. This tale opens with Bertie entertaining his old friend "Kipper" Herring; Bertie and Kipper once attended Malvern House, a private school run by the rather totalitarian Aubrey Upjohn. That was years earlier, but the man still gives them nightmares. As Jeeves is getting ready to set off on his vacation, Bertie gets an invitation by his favorite relative, Aunt Dahlia, to stay at her home. Bertie, knowing he will be Jeeves-less for a while, decides to go and take advantage of Dahlia's top-notch chef, Anatole. Bertie, however, will not be alone at Brinkley Court. Also visiting is Bobbie Wickham, a flighty young lady who has previously rejected Bertie's marriage proposals. That doesn't stop her from announcing their engagement as part of a ploy to make her parents accept her true fiance Kipper (who doesn't know of the plan). Bertie's occasional nemesis Roderick Glossop, the esteemed brain specialist, is there in the guise of a butler to observe Willie Cream (attending with his mystery writing mother), a potential deadbeat who is courting Dahlia's goddaughter, Phyllis. Finally, we have Phyllis's step-father, Aubrey Upjohn himself. Between Bobbie's schemes and Glossop's undercover work, complications ensue (especially when the notorious silver cow creamer goes missing), and Bertie is caught in the middle, requiring eventual intervention from Jeeves. This is not the best Jeeves and Wooster story, but it is still fun to read. Occasionally, Bertie's narration is a bit too over-the-top even for him, but usually it is as delightful as always. Jeeves's absence for much of the book, however, may be necessary for the plot but still leaves the tale a little emptier. In an era where most humor (enjoyable as it may be) is typically dark, ironic and/or an inside joke, it's nice to read material that is more straightforwardly funny.

Bertie Soldiers on during Jeeves's Vacation

Published by Thriftbooks.com User , 18 years ago
Bertie Wooster is one of P.G. Wodehouse's greatest comic characters. He is normally balanced by the quick wit, aplomb and shimmering progress of Jeeves, his butler. But even butlers need a vacation. So Bertie bids good-bye to Jeeves for the year . . . and promptly faces all sorts of unexpected problems. The troubles begin a most distraught telephone call to Bertie from Lady Wickham. She sobs between words as she demands to know if "this awful news is true." The awful news is in this morning's Times. When Bertie opens the Times, he finds an announcement of his engagement to Lady Wickham's daughter, Bobbie, a woman to whom he has tried to become engaged to in the past. Darned if Bertie can figure out what it's all about. Bobbie, although beautiful, is one of those women who want to improve their men, and Bertie isn't up for such improvements. The path to solving the challenge leads him to his aunt Dahlia's country home, Brinkley Court, to help her entertain Homer Cream, an American tycoon who is doing a deal with her husband, Tom, where Bobbie is also staying. Bertie's old headmaster is also in residence, which leaves Bertie quaking. But the lure of Anatole's delightful cooking draws Bertie to Brinkley. Once there, events become ever wackier. Sir Roderick Glossop, who thinks Bertie is dotty, is posing as the butler to evaluate a fiancé. As usual, romance, plots to gain funds, weird collections and mistaken identities quickly twist the story into unexpected complications and directions. The pages are filled with original similes and metaphors that will delight any student of the English language. This story has great fun with the fish theme. Bertie's great friend Reginald Herring has the nickname of "Kipper." At one point, Bertie says coldly that "I have every right to goggle like a dead halibut . . . ." Elsewhere, Bobbie's motives are described as, "She wanted you to see the big fish . . . you must have been surprised to see Kipper . . . ." Cream and cream pitchers are also done well in this story. But the best schemes of Bertie and Kipper come a cropper, and Jeeves has to be called back to make a miraculous recovery for the causes of love and the old feudal spirit. Right ho!
Trustpilot
Copyright © 2022 Thriftbooks.com Terms of Use | Privacy Policy | Do Not Sell My Personal Information | Cookie Preferences | Accessibility Statement
ThriftBooks® and the ThriftBooks® logo are registered trademarks of Thrift Books Global, LLC