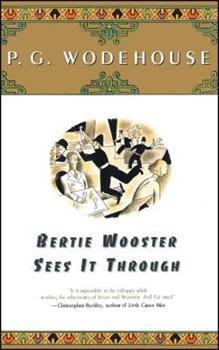 Bertie Wooster Sees It Through

A Bertie and Jeeves classic, featuring novelist Florence Craye, a pearl necklace, and The Mystery of the Pink Crayfish. Bertie is in a genuine fix. Not only does Jeeves disapprove most strongly of Bertie's new mustache, but also, and more disturbingly, "Stilton" Cheesewright is in a jealous rage and threatens to tear him limb from limb. In Bertie Wooster Sees It Through, more than ever, Bertie needs the wisdom of the peerless Jeeves to extricate him...

Another Wooster and Jeeves Classic From the Master

Published by Thriftbooks.com User , 15 years ago
In this novel, also published as Bertie Wooster Sees It Through, farceur supreme P.G. Wodehouse brings together all the elements for a delightful Bertie and Jeeves adventure: the endangerment of Bertie's bachelorhood, threats to his physical well-being, Aunt Dahlia's magazine Milady's Boudoir, the necessity for Bertie to steal jewelry, the possibility that Aunt Dahlia will have to part with her marvelous cook Anatole, and more. Bertie's narration, always a joy, is in particularly fine form in this novel, and, as always, Bertie's engagement is broken off when his fiancee decides to wed another, Anatole stays with Aunt Dahlia at Brinkley court, and things in general turn out for the best, thanks largely to Jeeves's genius. Any veteran reader of Wodehouse's work knows that this will be the case, but Wodehouse's genius is such that the book is an absolute joy, anyway, on the first reading or the seventh.

Gentle satire of upperclass life seen through the eyes of a "gentleman's gentleman."

Published by Thriftbooks.com User , 15 years ago
With delightful, tongue-in-cheek humor, P. G. Wodehouse continues the adventures of Bertie Wooster, an often silly member of the upper class who depends on his much more sensible "gentleman's gentleman," Jeeves, to keep his life from falling apart. In this novel, Wooster has been growing a mustache for the two weeks that Jeeves has been on a shrimping holiday, and he fears that Jeeves will not like it. Sure, enough Jeeves does not, and neither do any of his other friends--except for Lady Florence Craye, his former fiancée, now engaged (to Bertie's great relief) to Stilton Cheesewright. The fate of the mustache is only the starting point for Wodehouse's comedy of errors, however, as Bertie goes from London to his Aunt Dahlia's country home, where Lady Florence, Stilton Cheesewright, and Percy Gorringe, a young man who wants to produce a play based on Lady Florence's book, are also in attendance. As Lady Florence and Stilton Cheesewright play out their on-again, off-again romance, Percy is casting longing eyes at Florence, who is flirting with Bertie, once again. As is always the case with Wodehouse, events quickly become more complex. Percy wants Bertie to invest one thousand pounds in the play. Aunt Dahlia, wanting to sell her magazine, decides to "salt the mine," secretly selling her pearls so she can serialize a novel by a famous romance author to make the magazine more attractive. Her husband, at this point, decides to have the pearls appraised. Bertie takes Florence to a nightclub to "do research for her new novel," and he is arrested. Not surprisingly, it is the resilient Jeeves who comes to the rescue, time and time again, proving that good sense and grounding in the real world are far more important than the silly pretensions of Bertie and his friends. Wodehouse's gentle satire of upperclass life makes his novels appeal to a broad spectrum of readers. His word play, consummate sense of irony, and ability to make dialogue sound simultaneously absurd and realistic create a fast-moving set of outrageous scenes in which Jeeves, the "gentleman's gentleman" proves to be the real hero, the one person who knows how to live in this silly world. Mary Whipple

Published by Thriftbooks.com User , 15 years ago
As Evelyn Waugh points out, Wodehouse's world is idyllic. It is not our world. It has a different set of rules, for instance, the fate of its characters are determined by silver cow creamers and French cooks. Call it absurd or trivial, and you would be right. If you are tired of "serious" literature and the "real" world, this is a wonderful place to escape to! Typical of the Jeeves and Wooster tales, Bertie Wooster Sees It Through begins (and ends) with a trivial yet heated battle between the sage valet and his woolly-headed charge: Bertie's newly acquired mustache. Jeeves can't stand the thing, and Bertie is to be damned if he is going to have his face edited by a hidebound gentleman's gentleman. Of course, the plot thickens, involving unwanted engagements, jealous lovers, police raids, and fake pearl necklaces. This is an extremely funny and charming book. The ending breakfast scene is one of my favorites.

Published by Thriftbooks.com User , 19 years ago
Previous: The Mating SeasonBertie Wooster Sees It Through surprised me a great deal. I had read almost all of the Jeeves books by the time I got to this one, and I had no idea that I could still be so utterly and completely charmed by Wodehouse's words. Of all the Jeeves books, this one is probably the funniest, with the most laugh-out-louds-the knee slapping, snorting, tears-streaming-down-your-face, scaring-the-cat-out-of-the-room kind. I can't praise it highly enough. First, the setting is a breath of fresh air. After visiting such horrific places as Steeple Bumpleigh and Deverill Hall, going back to Brinkley feels like going home, complete with Aunt Dahlia and all her warm endearments ("Bertie, you revolting object."). One delightful twist after another brings Bertie to the brink of disaster and back again, as he is faced with the prospect of having his spine broken in three, four, or five places by the oaf Stilton Cheesewright and, worse yet, marriage to Florence Craye. Couple that with Bertie's new mustache, Aunt Dahlia's pearl necklace, a somber chap by the name of Percy Gorringe, and the Drones darts tournament, and you have the funniest thing ever written in the English language. And that, by the way, is what makes Wodehouse so wonderful-it is not the characters, nor the stories, nor the settings, but the language he uses, and the way he forms sentences, and the vocabulary which is an eclectic mix of colloquialisms, literary references, foreign phrases, and Woosterisms. Until I read Wodehouse, I had never dreamed that the English language could be rendered so beautifully, and so, so, so brilliantly funny. It is like nothing else I have ever read.Next: How Right You Are, Jeeves (Jeeves in the Offing)

Published by Thriftbooks.com User , 21 years ago
P.G. Wodehouse writes in a Dave Barry meets Agatha Christie style which makes you laugh out loud. P.G. Wodehouse was Agatha Christie's favourite author for a good reason. He gives you a visit to England in 1930 (or thereabouts) and plots with every twist you can imagine. In this one, Bertie, the upperclass twit, gets himself into the usual fix, and Jeeves finds a way out. The plot carries you along and keeps you in both suspense and stitches. Please listen to it if you have even a smidgen of the blues! If you have kids who are intelligent teens, this is a great family car trip book.
Copyright © 2020 Thriftbooks.com Terms of Use | Privacy Policy | Do Not Sell My Personal Information | Accessibility Statement
ThriftBooks® and the ThriftBooks® logo are registered trademarks of Thrift Books Global, LLC