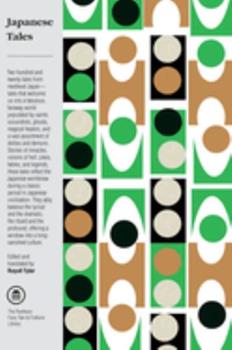 Two hundred and twenty tales from medieval Japan--tales that welcome us into a fabulous faraway world populated by saints, scoundrels, ghosts, magical healers, and a vast assortment of deities and demons. Stories of miracles, visions of hell, jokes, fables, and legends, these tales reflect the Japanese civilization. They ably balance the lyrical and the dramatic, the ribald and the profound, offering a window into a long-vanished culture. With black-and-white...

A collection of 220 folk tales from old Japan

Published by Thriftbooks.com User , 18 years ago
"Japanese Tales" is probably the best collection of Japanese folk tales available. Every conceivable piece of folk lore is packed in this book, categorized and deftly translated into English. A host of monsters, ghosts, demons and heroes are packed in tightly, their stories waiting to be discovered.Of course, with 220 stories in one volume, some of the stories are very short indeed, lasting a half-page at best. Many are just the right size for a child's bedtime story. Some of the stories are longer, but I don't think any of them run over 2 or 3 pages. Some stories have a moral, or tell a cautionary tale, while many are merely there to entertain, frighten or amuse.As interesting as the book itself is the author's introduction, a 35 page quick course on Japanese folklore and mythology. In it, he outlines some fundamental themes as well as showing the logic behind his categorizing of the stories.An excellent book, belong on the shelf of anyone with an interest in Japanese folklore.

Tyler is one of the best

Published by Thriftbooks.com User , 18 years ago
Royall Tyler is one of the best, if not _the_ best translator working to translate classic works of Japanese literature into English. This collection of short tales provides a wide sampling of many stories told and retold in Japan for many centuries, and range from the humorous to the romantic to the bizarre. Some are very short while others are much longer. Each of the originals had a simple style derived from the oral traditions that preserved them. Some of them constitute the oldest folk tales ever written down, dating to collections made by gentlemen scholars of the 12th century who wrote down tales they heard for their own entertainment. But the collection pulls in tales from many different eras of Japanese history and many different aspects of Japanese culture, providing a truly diverse and entertaining set of stories for the reader who wishes either to enjoy a good tale, or for the serious student of Japan who wants to understand the culture more deeply.Royall Tyler also made the definition translation of _The Tale of Genji_, the 11th century classic novel that is the crown jewel of Japanese traditional literature and one of the world's great novels. _Genji_, running approximately one thousand pages in English translation, written in the elegant language of the Imperial Court, is the very opposite of these short, vernacular folktales and stories. That Tyler can do justice to both sorts of work is a rare and admirable quality in a translator. Serious students of classical Japan will find that the tales included in _Japanese Tales_ that date to the same era as _Genji_ offer a valuable alternate perspective to life and society during this time period. Any library that carries _The Tale of Genji_ on its shelves ought to carry _Japanese Tales_. The two works serve as bookends to the opposite ends of the Japanese traditional literary spectrum.

Published by Thriftbooks.com User , 19 years ago
For my money, everything that Royall Tyler touches turns to gold, and that is as true of "Japanese Tales" as it is of his more recent translation of "The Tale of Genji." In "Japanese Tales," he has assembled and artfully translated 220 stories published between the ninth and fourteenth centuries in Japan, stories that are often difficult if not impossible to find elsewhere in English. For the most part, these are not the extended stories that we tend to call fairy tales in the West, and the book is not designed to provide reading material for children. What it does provide is a very solid sampling of the types of tales the early Japanese used to provide moral guidance, explain how things came to be, and record historical moments. And if that were not enough, Tyler's outstanding introduction, 35 pages in length, provides a lucid understanding of life in Heian-period Japan and beliefs about everything from serpents and mountains to deities and demons. This is simply a book you cannot afford to miss if your interests in Japan are those of either an enthusiastic amateur or a focused scholar.

Published by Thriftbooks.com User , 25 years ago
Superbly compiled and translated by Japanese scholar Royall Tyler, this eloquent anthology presents a great deal of diversity as far as materials are concerned. Ranging from exploits of shinto dieties, mythological monsters and animals, playful to erotic tales about samurai, courtesans and ladies, Particularly interesting are the religiously-oriented tales involving various Boddhisattvas and dieties, most notably Kwannon (the buddhist diety of compassion) This book is an inexpensive, accessible and entertaining source to anyone interested in Japanese traditional society
Trustpilot
Copyright © 2022 Thriftbooks.com Terms of Use | Privacy Policy | Do Not Sell My Personal Information | Cookie Preferences | Accessibility Statement
ThriftBooks® and the ThriftBooks® logo are registered trademarks of Thrift Books Global, LLC