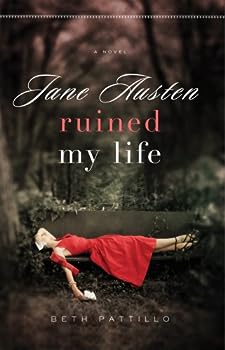 This description may be from another edition of this product. English professor Emma Grant has always done everything just the way her minister father told her she should -- a respectable marriage, a teaching job at a good college, and plans for the requisite...

Published by Thriftbooks.com User , 12 years ago
Emma Grant was living a real life Jane Austen fantasy. She had a promising career. She was even married to the perfect gentleman. So she thought. That is, until Emma caught her husband Edward and his teaching assistant in a compromising situation on the kitchen table. This just happened to be the same woman who would later accuse Emma of academic plagiarism. Angry that she actually believed Jane Austen's nonsense about true love, Jane went a little crazy. She decided that she'd go to England and find Austen's lost letters. Her intention, to prove that Jane Austen was a hypocrite who preached love but had never experienced it herself. I've read quite a few romantic novels where the main character looks for Jane Austen's lost letters. Jane Austen Ruined My Life is easily the best. From the very first page, the Emma resonates with that cynical part of us all. Maybe she goes further than we might do in her situation but that is part of her charm. The end is wonderfully appropriate.

A Jane Austen "What If" Book

Published by Thriftbooks.com User , 12 years ago
Emma Grant has traveled to England, to get away from the scandal involving her ex husband which caused her to lose her job as a professor. Her goal is to find the missing letters of Jane Austen that have been highly coveted by researchers and fans of Austen for years. The owner of one of the letters invites Emma to participate in a scavenger hunt of sorts to find the rest of the letters and discover who the real Austen really was. Along the way Emma begins to not only find out more about the true life of Jane Austen, but finding out more about her own self as well. As a huge Jane Austen fan, I've been snapping up anything to do with her lately. She's become the newest trend in books, TV shows, and movies. And frankly I'm loving it as she was one of the best authors ever in history. This novel is a "What could have happened?" type of story dealing with Jane Austen and her long lost letters. Fans and researchers of Austen have always been devastated to hear that Austen's sister burned a majority of her letters. Imagine what a huge break into Jane Austen's life and personality it would be if those letters one day turned up? Reading this book was absolutely lovely and one of the best ways to spend a rainy afternoon. I love stories that take place in England, whether they are modern day or historical. This book totally gave me the feel of being in Britain as the descriptions of the towns and cities made them come to life. British culture is very unique and as a reader, you can tell research had gone into making the story very authentic. It would be my dream to be Emma and experience this adventure. As a history major, literature lover, and closet Anglophile this book was right up my alley. You feel for Emma throughout the book. Every time she mentioned what happened with her ex husband, you feel her pain. It's totally understandable why she left and came to England to do something for her own self.The scenes with Mrs. Parrot and learning about the Formidables was probably one of the coolest scenes ever written for Jane Austen fans. I think if I had been in Emma's place at that point and held an authentic real Jane Austen letter, I would be freaking out. My favorite scenes in the book are when Emma goes to the sites where Jane Austen had actually visited and with each site she becomes overwhelmed with emotions. One of the curators tells her not to worry because everyone who goes there acts in the same way. It's amazing how one writer has that power to captivate millions of readers throughout hundreds of years. My only qualm was the ending. I felt a little let down by it since there had been a lot of buildup. I also found it rather odd that TomLefroy was never mentioned at all in the whole book. Otherwise, it simply a wonderful book. It's a wonderful armchair traveler and it is also effective at taking you back into time as well. I really got into this story and it was one that I could not put down. It's really one of the best novels focusing

The Secrets Behind Passionate Prose!

Published by Thriftbooks.com User , 12 years ago
Emma Grant has lost everything she previously valued in life, her marriage and her career in one fell swoop of betrayal and conviction based on association. A Jane Austen scholar, her love for this famous author provokes her to escape America and travel to England to do some research that may or may not yield fruit with which to restore her professional career. Between 1800 and 1804, an empty, unexplained space lies in the prodigious correspondence of Jane Austen. How will Emma's connection with Mrs. Parrot, a knowledgeable woman living in relative obscurity, guarantee Emma success in her carefully plotted, unorthodox plan? The mysterious Mrs. Parrot tells Emma she must carry out a number of tests to ensure she is worthy of reading Jane Austen's missing letters. While not particularly difficult to complete, the process of doing these tasks becomes very, very complicated by the presence of Adam, an old flame whom Emma rejected over her ex-husband, Edward's loving advances and Barry, a slick, super-handsome male Emma meets. Barry causes just about all women to swoon with lustful, passionate response wherever he appears, and Emma is no exception for sure to his debonair advances as well. But there's more than meets the eye with every character in this humorous, fascinating and poignant tale! As Emma sets upon the quest to discover the reason for Jane's silence, Emma discovers that every person has secrets that forge a person's character, forcing one to choose honor over shame, true love over devious machinations, and integrity over deception based on self-aggrandisement. Historical fiction lovers will relish the places Emma visits, the descriptions of churches, bookstores, seaside resort areas and other notable places where Jane Austen lived, visited and wrote her well-known, renowned novels. Love conquers the heart and mind in many, many ways, but Beth Pattillo has delved wider and deeper in the landscape of past and present history to grace the reader with secretive, dynamic, complicated and fascinating characters who enrich the true meaning of honor and love! The legacy of Jane Austen is alive and well in Emma Grant's journey to a novelist's singular, fascinating process! Well, done Ms. Pattillo! Keep writing so we may thoroughly enjoy your talent as much as readers will enjoy Jane Austen Ruined My Life! Reviewed by Viviane Crystal on December 14, 2008

Filled with wittiness, some deception and more than a little pathos

Published by Thriftbooks.com User , 12 years ago
Emma Grant is on board an airplane en route for London where she will take her revenge on them all. Her last trip to London had been in first class with her ex, Edward. From that opening we travel with Emma, English professor, denied tenure based on the lies of a Teaching Assistant who was trysting with Edward, on a quest to find the rumored lost letters of Jane Austen supposedly destroyed in a fire. It is during the reading of the prelude that we find our main character musing about how Jane Austen ruined her life, and her mother filled her head with notions of happily ever after, and her preacher father instilled the idea that God has a plan for everyone's lives. All of that was before she became a grown up and married a cheating man who proved that there are not always happy endings to every situation. A dutiful daughter, Emma has always done everything her parents expected. Divorcing her husband, and facing a penniless future was not part of their expectations. Emma does not know how to tell her parents the true cause of the divorce, the scandal leading to her losing her job, or any of the rest of the heart rending trials she has experienced. So, she kept her own counsel and sets out for London in the hope that she might forget her own misery and somehow pursue research which if she is successful she just might reestablish her credibility and again begin teaching. It was soon after her arrival in London that Emma discovered her old friend, once her best friend, Adam was also a house guest in the home of her cousin Anne- Elise. It has been a decade since she last saw Adam, entered into a marriage with Edward and has found herself newly divorced. Her parents despair at the divorce is understandable given their own upbringing, Emma's compliant nature and their station in life. After-all Rev. Grant IS a minister. The narrative moves quickly into settings in London, meeting with Mrs Gwendolyn Parrot who says she has the missing letters or at least some of them, Stanhope Gardens and school girls on the streets, a secret society devoted to the writer Austen, a picnic with Adam, meeting a debonair man over whom all the women tend to swoon, and a renewed sense of betrayal and loneliness, an offer of quite a huge sum of money and a clandestine kiss all boil down to one interesting, fast paced read. Writer Patillo has both visited and studied in London and she brings the city and countryside into the story almost as a secondary character. The reader feels almost carried right into the locales where Jane Austen herself lived, stayed and penned her celebrated novels. Emma Grant is a study in indecision based on great conviction. Her ex husband is an interesting, flawed character. Adam is a man we all hope to know, romantically or not. Emma's decisions at last to find peace with herself and her dreams are understandable, readable and noteworthy. Jane Austen Ruined My Life is filled with wittiness, some deception and more than a little pathos. Durin
Copyright © 2020 Thriftbooks.com Terms of Use | Privacy Policy | Do Not Sell My Personal Information | Accessibility Statement
ThriftBooks® and the ThriftBooks® logo are registered trademarks of Thrift Books Global, LLC