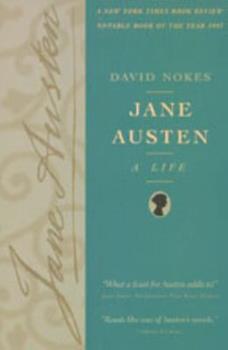 In this new biography of Jane Austen, David Nokes plays master sleuth and storyteller in presenting the great novelist "not in the modest pose which her family determined for her, but rather, as she most frequently presented herself, as rebellious, satirical, and wild."

What was in those letters that Cassandra burned?

Published by Thriftbooks.com User , 23 years ago
This is a good read, well-researched, well thought out and written. Mr. Nokes takes his reader through a fairly wonderful ride about Steventon and its environs. He gives a very clear picture of Jane Austen's family, especially in his interpretations of her relationships with her sister and brothers and cousin Eliza. Notwithstanding his research and his ability to capture and understand Jane Austen and her life, there are some surprising problems which occur later in his book. He does a nice job convincing the reader of Jane Austen's acerbic wit, her double entendres, her hidden messages, her colorful disdain and delights as revealed in her letters. Consequently it is all the more unsettling when Mr. Nokes, three-quarters into his book, does an abrupt about-face and takes a familiar passage from one of her letters at face value. I refer to the passage where she writes of PRIDE AND PREJUDICE as being "rather too sparkling...wants to be stretched out...with a long chapter...An Essay on Writing, a critique on Walter Scott, or the history of Buonaparte". It is beyond anyone's credibility to imagine that the writer of NORTHANGER ABBEY would write these words with any intent but satire and mockery but Mr. Nokes, after having demonstrated how exceptionally mocking and satirical Jane Austen could be, decides to take her at face value and remarks, "suddenly...she felt as if there was nothing that she could not or dared not write". Perhaps he wants to distinguish himself from other biographers by a fresh appraisal of Jane Austen's self regard but I am not convinced that, upon publication of her early works, she suddenly felt a modern sense of stardom. Mr. Nokes seems to imply that SENSE AND SENSIBILITY and PRIDE AND PREJUDICE, early drafts of which were written years before publication, were simply pulled out of her writer's desk, dusted off and updated so that the certain references would seem contemporary. I was fascinated that Mr. Nokes ends this biography by depicting Jane's brother George (essentially banished and forgotten by the Austen parents for being mentally handicapped) as an example of Jane's ultimate selfishness and callous nature. I doubt that enough is known of the circumstances for this conclusion to be just.
Copyright © 2022 Thriftbooks.com Terms of Use | Privacy Policy | Do Not Sell My Personal Information | Accessibility Statement
ThriftBooks® and the ThriftBooks® logo are registered trademarks of Thrift Books Global, LLC