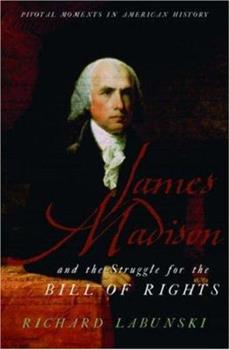 James Madison and the Struggle for the Bill of Rights

by Richard Labunski and Richard Poe

Today we hold the Constitution in such high regard that we can hardly imagine how hotly contested was its adoption. In fact, many of the thirteen states saw fierce debate over the document, and ratification was by no means certain. Virginia, the largest and most influential state, approved theConstitution by the barest of margins, and only after an epic political battle between James Madison and Patrick Henry. Now Richard Labunski offers a dramatic...

Published by Thriftbooks.com User , 14 years ago
Richard Labunski wrote a an exceptional book on the creation of the Bill of Rights, for which I give my great thanks and express my indefinite gratitude. He provided exceptional backdrop on each step towards the Bill of Rights formation and ratification, which made its reading all the more pleasureable. At some points in the reading I'd find myself seemingly sitting in the location where the event was unfolding. Not only was his prose exceptional, but the information conveyed was backed by extraordinary research and effort. There was no room for lack of understanding or foundation; you could feel the emotions of the contenders as you turned the page. Great thanks to Mr. Labunski for allowing me and others to have such a wonderful work in our libraries and minds.

Political history at its finest

Published by Thriftbooks.com User , 14 years ago
James Madison and the Bill of Rights is another great addition to the Pivotal moments in American history series. The author does an excellent job of laying out what would happen had the bill of rights not been enacted and the path taken in Madison's evolution to the bill of rights. The author does an excellent job of taking the reader through the stages of the constitutional convention, the ratification process (focusing mostly on Virginia which was the pivotal lynchpin in getting New York's acquiescence) and then the formation of the new government followed by the development of the bill of rights. For those interested in political history this is a must read for the analysis on how the Bill of Rights and our early government was formed. This is a great starting point and an excellent primer for some of the more detailed works that follow. I strongly encourage everyone to read not only this entry into the series but the entire pivotal moments series for a true understanding of the major paradigm shifts in American history and how they impacted the development of the American psyche and were essential in our development of an American identity. In this case it is the codification of American liberties and the struggle to define those liberties that shed light on the values of the founders and the cautios nature of a limited government.

Published by Thriftbooks.com User , 14 years ago
Dr. Labunski captures the emotion, immediacy and intensity of the debate over the Bill of Rights as only a journalist of the day might be expected to write. A truly new perspective on Mr. Madison as "vote counter" and "political strategist."

Published by Thriftbooks.com User , 15 years ago
"James Madison and the Struggle for the Bill of Rights" was a very enjoyable read, and one that I would definitely enjoy reading again. It is full of detail, but doesn't lack on readability either. Unlike some of the reviewers, I enjoyed the details of weather conditions and felt that this information was important to telling the struggle for the Bill of Rights as weather was a huge obstacle to travel in that time. I also was able to better picture what it would be like to sit in a hot, sultry, building with no ventilation (as when the windows had to be closed due to the noisy streets) and spend hours discussing how much power the constitution would grant the federal government or if it indeed would greatly infringe on individual liberties. Lets go out on a limb, and say that James Madison probably wouldn't make it in politics today. He was 5'4", shy, soft spoken, and portrayed by the author as extremely timid when speaking in front of a large group. He also "flip-flopped" on his stance on the Bill of Rights, which at that time seemed to be democracy working (Today he would probably be eaten alive); Madison seems to not only believe passionately about the importance of a strong federal government, but evolves to believe just as passionately about the protection of the people's individual rights (Thus- A Bill of Rights). OK, it could be argued that he had to compromise and promise support of a Bill of Rights to get elected, but the author seems to feel that Madison truly believed in their importance. The story of Madison is very interesting and even for his time he seems to be somewhat of an underdog whose passion, intellect, and love for his country allowed him to prevail over his short-comings. His election to the House is nothing but fascinating as once again the cards were stacked against him (Thanks to Patrick Henry who gerrymandered his district so that he would likely lose). The story of Virginia's constitutional congress was every bit as fascinating, and it can be said that human nature and the psychology of politics had many similarities then as it does now. Many people had passionately different philosophical views of what government should and shouldn't be. As could be argued today, both sides had some good points. It was interesting how fear seemed to perpetuate both sides passion. The Anti-Federalists being fearful of a monarchal type of government invading on individual liberty, and the Federalists fearful that individual states wouldn't have economic power or the ability to defend themselves. The author portrays the high-stakes decision of Virginia ratifying the constitution without a Bill of Rights. He points out that if this hadn't happened, George Washington wouldn't have even been eligible to serve in the new government. Anyways, the story of our founders verbally battling it out in a theater in Shocco-Bottom in Richmond is also well portrayed. For anyone interested in American history and politics, I would re

Published by Thriftbooks.com User , 16 years ago
Loved this book! I read it in one day...couldn't put it down. Learn how our precious Bill of Rights almost didn't come into being, and learn about the men who made sure it did.
Trustpilot
Copyright © 2022 Thriftbooks.com Terms of Use | Privacy Policy | Do Not Sell My Personal Information | Cookie Preferences | Accessibility Statement
ThriftBooks® and the ThriftBooks® logo are registered trademarks of Thrift Books Global, LLC