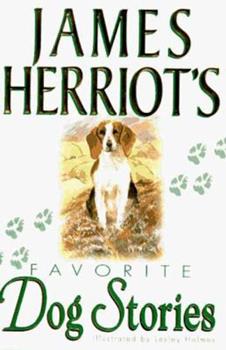 This description may be from another edition of this product. A warm and joyful collection of James Herriot's loving tales of our furry friends from delightful old favorites like Tricki Woo to heartwarming stories of Brandy, Hermann, Jock, and more. James...

Not for dog lovers only

Published by Thriftbooks.com User , 18 years ago
James Herriot's Dog Stories is written by a man who loves both people and animals. The descriptions of people, dogs, and his humble view of himself are an irresistable combination. The accuracy and wit with which he presents people's relationships with their dogs is priceless. When I read this book, I laugh at the eternal goofiness of dogs and also dog people! The sadder stories are written with a balanced view. This book is an amazing collection of short stories. Highly recommended.

Published by Thriftbooks.com User , 18 years ago
If you have any passion for animals at all, you will devour this book. It's so sweet and wonderful -- a masterpiece of 20th century literature.Mr. Herriot was truly a gifted writer. His heart could be felt in every word -- he deeply cared for the animals he doctored over the years. Aside from the endearing tails (pardon the pun), he masterfully described the European countryside, the people who belonged to the pets, the pubs he frequented and his everyday astonishing feats of medical marvelry. Yet he was so humble and down-to-earth. His stories are either tear-jerkers or pant-wetters. More than once I found myself nearly crying during study period at college because I was laughing so hard.Some of my favorite shorts were "The Card Over the Bed", "Tricki Woo", "Granville Bennett", "Have a Cigar" and "Mrs. Donovan" -- the latter being my favorite. (Mrs. Donovan was a crone who patrolled the streets of Darrowby trying to cure people's animals quite often causing strife for Mr. Herriot.) The very best thing about this book, aside from it being a quick and easy read, is that the stories are broken up so that you can put it down at any time and come back to it without fear of having lost your place. James Herriot was the master of animal literature. Never have I encountered a more tasteful writer who so accurately depicted the behavior of dogs. I am a huge animal lover having two cats and a dog of my own. I found amazing similarities between the antics of the dogs showcased in this book and my own golden lab, and reading it made me want to cuddle him closer.

James Herriott is the most wonderful relaxing writer

Published by Thriftbooks.com User , 19 years ago
I think I have not had a more pleasant reading experience than sitting down next to a burning fire place, listening to my favorite antique clock ticking.. the patter of rain on the window panes and reading James Herriott. It is a memory of that afternoon that all these years later I have never forgotten. James Herriott is the most pleasant, relaxing, refreshing writer. Forget all the worries and cares and escape for a few minutes into a quiet world where the animals speak their own language.. A wonderful book, a wonderful writer. Thank You James Herriott for the memories.

Published by Thriftbooks.com User , 20 years ago
This TV vet has put down in words stories of some of his most famous dogs. The characters, both human and canine, are unique and entertaining. His style of writing is concise, and descriptive and passionate.Loved the story of 'Judy The Nurse Dog' who nursed all the other animals in the barnyard, including licking of a newborn calf to nursing a chicken back to health. This sheepdog was true Florence Nightingale of Canine World.Great heroes and such to be found in this great read. All dog lovers will enjoy this one.

They're Human Being Stories Too

Published by Thriftbooks.com User , 21 years ago
In has been roughly two decades since I read James Herriot's salubrious "All Creatures..." series, yet when I picked up this "best of" concoction, many of the dulcet vignettes were as fresh in my mind as if I had lived them last week. Although trained as a vet, James Herriot had a true gift with the written word. These tales about pets and their two-legged counterparts shine a light deep into the mechanisms of human nature. While he succeeded admirably as an honorable animal doctor and found worldwide fame as a late-in-life author, perhaps he missed his true calling as a psychologist. The humor, heartbreak, and humanity that he so eloquently captures in these stories shows a sagacious mind. It's no wonder that his time on earth brought many smiles and caused many a tail to wag.
Copyright © 2020 Thriftbooks.com Terms of Use | Privacy Policy | Do Not Sell My Personal Information | Accessibility Statement
ThriftBooks® and the ThriftBooks® logo are registered trademarks of Thrift Books Global, LLC