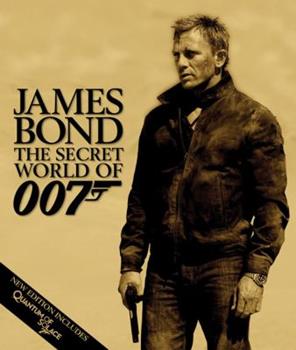 James Bond: The Secret World of 007

For fans of all things Bond from Sean Connery's debonair debut to Daniel Craig's new take on our classic favorite, the secret files of James Bond have never been more tantalizing. This comprehensive update of this best-selling book features more photos, more information, and the newest film, Quantum of Solace.

It wins hands down over the competition.

Published by Thriftbooks.com User , 15 years ago
James Bond fans, take note: this is a revised edition of a best-seller on the superspy created in colalboration with EON Productions, producer of his films, and has been updated to add his most recent movies. Newcomers as well as avid fans receive an oversized presentation which covers all his exciting missions, pairing plot with color photos throughout and offering new narrative scenes from his newest adventures. An updated James Bond filmography adds to the information. If you're a general-interest public library and have room for only one James bond moviebook, it should be James Bond: The Secret World of 007: it wins hands down over the competition. Diane C. Donovan California Bookwatch

Published by Thriftbooks.com User , 16 years ago
The Minute I saw this book I thought that this would make a great Christmas gift for some James Bond fan out there. You really have to see the insides of this book to see what I am talking about. Every page is filled with color photographs, drawings and diagrams from all 21 James Bond film. It is a beautiful looking book from cover to cover. I thought they covered enough on CASINO ROYALE without giving too much away. In fact they do a very good job with CASINO ROYALE. Some kid or a really big kid is going to love this book.

Published by Thriftbooks.com User , 16 years ago
DK books has made the great even better with their revised edition of "James Bond: The Secret World of 007". Previously released in 2000, this latest edition expands to include the two most recent Bond Thrillers "Die Another Day" and the upcoming "Casino Royale". As with all of DK's books, it is highlighted by fantastic photography from beginning to end and presented in an over-sized hardcover format with dust jacket, perfectly suited for the coffee table. The book start out with the perfunctory introduction to the character and his rich history including that distinctive "Bond look" , a section on "Q" the master gadget maker, as well as a look at the various bond women such as May Day, Elektra King, and Domino. Next the book gets into each of the Bond missions, i.e, the films, beginning with Dr. No. You'll go inside the plot of each film and the lair of each villain to meet the evil masterminds as well as their various henchman and attractive women. You'll relive the most harrowing moments of each film and see the tools that Bond applied to save the day. These sections feature numerous photos from each film as well as artistic renderings of things such as Dr. No's Crab Key lair which takes the reader through a step-by-step replay of Bond's ingenious escape. The Goldfinger section gets you up close and personal inside Bond's ride, the Aston Martin DB5 with it's pop-out machine guns, smoke emitting exhaust pipes, and ejector seat. Diamonds are Forever introduces us to the deadly assassins Wint & Kidd as well as a pair of gorgeous ladies Plenty O'Toole and Tiffany Case as the arch-villain Blofeld returns. The Spy Who Loved Me introduces us to one of the most popular Bond villains the giant, steel-toothed Jaws who gets a sizeable section in the book. While Bond enthusiasts will know all the details already, casual fans will really eat up this book and it's a simply gorgeous collectible. There are a couple of problems, though. One, is that you barely see Sean Connery, Roger Moore, or even Timothy Dalton anywhere in the book. The only Bond you really see is Pierce Brosnan up until the back section that lists each films credits. The other slight is that there isn't much coverage on Casino Royale but DK has that solved with their new book "Bond on Set" devoted to the latest Bond Film. Two minor things and not enough for me not to highly recommend this book. Reviewed by Tim Janson

Published by Thriftbooks.com User , 20 years ago
This is one of the best oversized books or just flat out any book on James Bond I have ever seen. This is a color extravaganza on the world of 007. This is a well thought out and well-researched book. Nobody just sat down at a typewriter and simply wrote this book. It is constructed and written something akin from the perspective of a motion picture production designer. Every aspect of this book is consistent to the overall image that the name James Bond conjures up. What is really unique about this book is how official photographs and pictures were combined with images specifically designed and drawn for this publication. What especially impressed me upon first thumbing through the pages of this book was how the sets from each Bond film were reconstructed in 3 dimensional diagrams by artists showing how the action and the characters moved about on the screen thanks to cinematography, special effects and editing. This alone is an invaluable analysis of the look of these films and the illusion they produce to create the world of James Bond. Dorling Kindersley once again has published an impressive book with their distinct look and flair for quality. As a James Bond fan this book is above and beyond anything I had ever expected.

Published by Thriftbooks.com User , 22 years ago
In a word, wow. When this showed up today, I was so dazzled by the beautiful photography, brilliant cutaway illustrations and classic DK "callout" design that it took me a few minutes to figure out what was really going on here. What's going on is simply this: this Bond book is the first of its kind. It exists purely within the fantasy universe created by the films. That is to say, that although it is crammed with pictures of actors, actresses, sets, models and props, none is described as such. Instead, each film is really a "case," actors are villains, actresses Bond's women, props are real weapons, sets are lairs. Picture a (DK) "Eyewitness Travel Guide" to Bond's (real) world and you get the idea. The hundreds of new and newly imagined technical illustrations are such a treat: you picture the film people talking to the book people, and all of them pondering, how WOULD this missile-launching ghetto blaster work?Although there are many pictures of Sean Connery (and the four other Bonds), his name does not appear ANYWHERE until a brief "movie index" ten pages from the end. This to me is a good thing. Those of us who watch the Bonds do so to live briefly in his slightly surreal universe. "Secret World" lets you do so in more depth and with greater understanding than ever before.Of particular value are these two brilliant features:1) Travel/fight scene breakdowns. To me, those dustups on speeding trains and flying blimps all happen in a blur. Who's he punching? What does that buy him? Here, in numbered steps, you can follow the hurtling vehicle's progress and how James stands at each turn.2) Evil lair cutaways. These help to bridge the huge gaps between those three Bond staples: exotic locales, imaginative model work and sprawling interior sets. In the films, we see these as: Bad process shot of motorboat speeding towards futuristic evil lair (model + location). Cut to wide shot of boat docking at interior dock (obviously a set). These cutaways show you the "real" relation and mitigate the fakeness.Frankly an incredible book. A must for the Bond person on your list. With this as your "official" guide and the wonderful "Mr. Kiss Kiss Bang Bang" as your unofficial, you're good to go.
Trustpilot
Copyright © 2022 Thriftbooks.com Terms of Use | Privacy Policy | Do Not Sell or Share My Personal Information | Accessibility Statement
ThriftBooks® and the ThriftBooks® logo are registered trademarks of Thrift Books Global, LLC